DIDSBURY – A local artist will be travelling to Berlin at the invitation of the Indigenous Tourism Association of Canada for a special ceremony on March 8.
Feb 27, 2018 12:00 AM By: Craig Lindsay 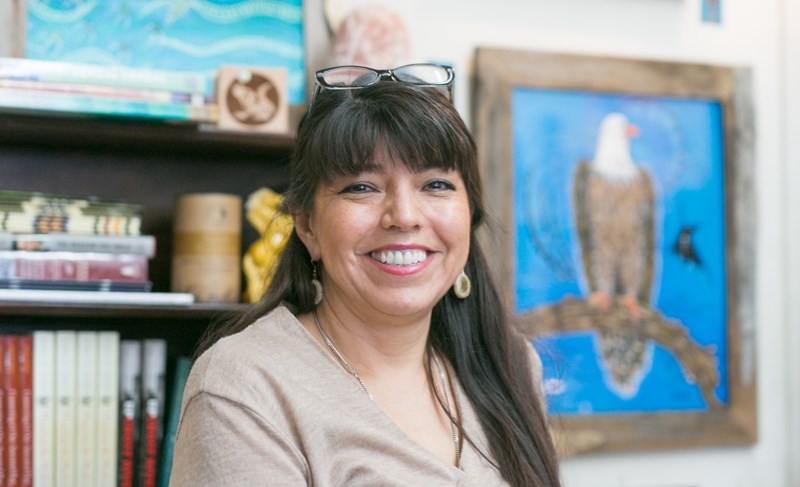 Delree Dumont with some of her artwork at her store Delree’s Native Art Gallery in Didsbury on Feb. 21.

DIDSBURY – A local artist will be travelling to Berlin at the invitation of the Indigenous Tourism Association of Canada for a special ceremony on March 8.

Delree Dumont, who owns and operates Delree's Native Art Gallery in town, was selected to paint three First Nations dancers at the Canadian Embassy in the German capital.

Dumont was invited after joining the Indigenous Tourism Association recently. Also helping with the trip are Tourism Alberta and Calgary Tourism.

"I was working with an indigenous woman from BusinessLink," said Dumont. "We were brainstorming on how to get my business name out there. She said I should become a member of Indigenous Tourism of Canada. I became a member. They have a Facebook page and a really good website. They promote indigenous tourism all across Canada to the world."

Dumont also applied to be a vendor at a conference the organization had at Grey Eagle Inn and Casino in Calgary recently and did very well. She also applied and received a grant through Indigenous Tourism of Canada.

Despite all her qualifications, Dumont was still surprised to be selected. She was thrilled to be invited.

"They could've picked any of hundreds of talented indigenous artists from across Canada, yet they picked me," she said. "I'm quite honoured to have got this opportunity. What they asked me to do is paint three indigenous dancers on linen that's stretched out on logs. They sent me a drawing of it and I said, ‘yes, I can do that.'"

Dumont said also attending the event will be the Calgary Stampede Indian Princess, the chef from Grey Eagle Inn and Casino and two other indigenous dancers.

"I'll be painting the three dancers in their regalia," she said.

Dumont, who is also a renowned indigenous dancer herself, will be bringing her regalia down for photos on the following day.

"They want to take photos of the dancers in their regalia," she said. "I then get one day to tour Berlin and play around. It's a whirlwind trip just from Tuesday until the following Monday."

Dumont is excited about the trip. She has been to Germany before but not Berlin.

"I've been to Frankfurt; that was back in 1993," she said. "I'm absolutely excited. Who doesn't like to travel? This is the first time going somewhere to paint."

Dumont describes her art style as pointillism, which is "a fancy word for dots."

"I didn't know it was a style until a friend said that, ‘hey, you do pointillism,'" she said. "I said ‘what?' And she said ‘Google it.' It's been around since the 19th century. My style of pointillism is a little different in that I paint my object first then go crazy with dots, whereas true pointillism is all dots. I absolutely love it."

"It's very time consuming but I get lost in it and really enjoy it," she said. "I've just always been an artist."

Dumont started dancing in 2010 after her mom passed away. She said dancing is her way of honouring her mother. "Every time I dance, the first dance is for her," she said.

Dumont is always happy to promote her culture and has done for a while.

"I love promoting my culture," she said. "I love being the resource for anyone to come in here and ask any questions about our culture and our traditions. I don't have all the answers, but I will find out.

"Even in my corporate world -- I was in oil and gas -- I promoted Aboriginal awareness in the corporate environment because it's needed in the oil and gas industry, when a lot of oil and gas are affecting First Nations lands.

"It's funny how my life has come full circle: from promoting it in the corporate environment to doing it full time as a career, as an artist."

Dumont opened her native art store in Didsbury in 2015.

She was born in Chilliwack, B.C. and eventually made her way to Alberta to work in the oil and gas industry.

Her parents are from the Onion Lake Cree Nation in Saskatchewan.

"When I left the oil and gas industry in July of 2014 I thought, what am I going to do with my life," she said. "I've always been an artist my whole life. I started painting again. I picked up my brushes. I changed my style from realism to pointalism. I posted them on Facebook and my paintings started to sell.

"From that point on I started doing art shows, arts and craft shows and trade shows just selling my own artwork, greeting cards and prints."

"I had a car full of stuff," she said. "In 2015 I began to work on a business plan with the City of Airdrie Smart Start program, where they help you create your own business plan and they give you one or two mentors to help you through the process.

"I was still going to art shows. I decided to open up a space. That wasn't easy because my business plan was based on Airdrie stats."

Dumont had planned to open in Airdrie but couldn't find an appropriate spot. She wanted a location that was rustic-feeling.

"I didn't want a shiny, fancy new building," she said. "I wanted something with character. I heard about White Raven (closing). I used to go there when I was in Didsbury and shop."

Dumont ended up moving into the former White Raven location next to the Gazette's Didsbury office and setting up her store there.

"I knew I was biding my time there until something came up on main street," she said. "Pine and Ivy approached me wanting to know if I would take over their lease and here I am."