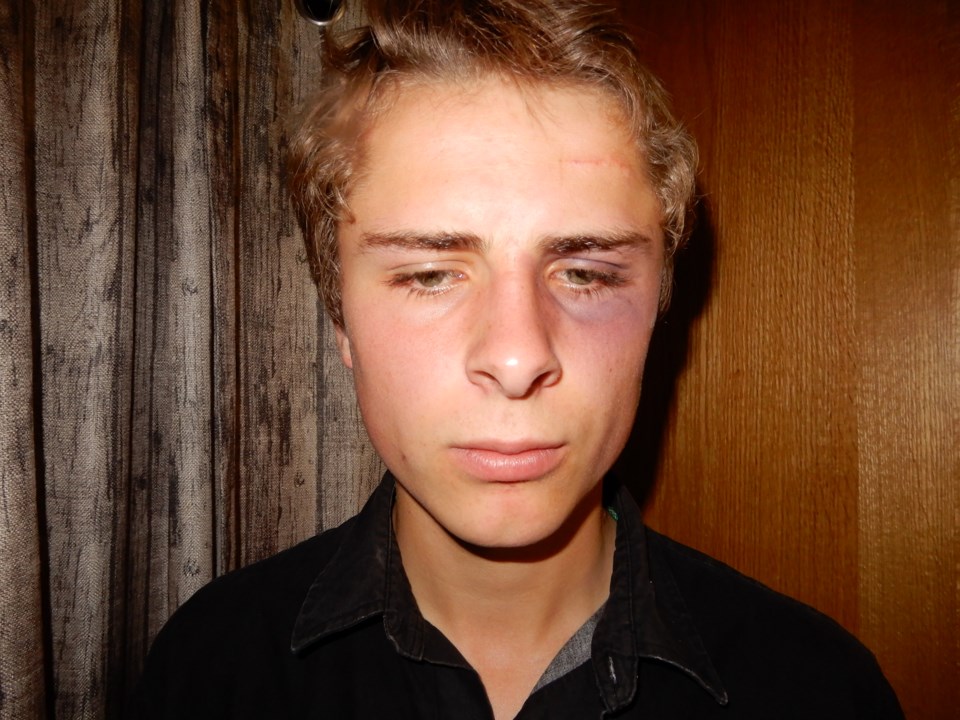 Jeremia Leussink following his arrest on July 31. His family says the facial injuries seen here came at the hands of Alberta sheriffs. Photo courtesy of the Leussink family

DIDSBURY – The family of an 18-year-old Sundre-area man arrested and charged following an incident with Alberta sheriffs outside Didsbury on July 31 want the charges dropped and an official apology issued.

Jeremia Leussink was driving a tractor from one field to another when he came upon a checkstop at the intersection of Highway 2A and Twp. Rd. 312A, according to his brother Clinton.

While Jeremia has declined to speak to the media, Clinton has provided comments.

Jeremia drove into the ditch in an attempt to bypass the checkstop and get into the field, he said.

At that point a number of officers approached the vehicle and a confrontation occurred, he said.

Several videos of the incident were shot by bystanders and have been posted online.

One video appears to show officers pulling Jeremia from the vehicle, throwing him to the ground, restraining and handcuffing him.

“He was punched in the neck, the head and in the back several times,” said Clinton. “They struck him in the tractor numerous times. We have footage of blood all over the tractor.

“They told him he had to take a breathalyzer and he asked what that was and why he had to do that. Without any further explanation they attacked him.

“You can hear my brother screaming in the video and asking what they are doing as they beat him to the ground.”

Jeremia suffered facial and other injuries, he said.

Jeremia has been charged with resisting arrest and refusing to take a breathalyzer.

“He had no idea that doing his job could land him criminal charges,” said Clinton.

Alberta Justice and Solicitor General spokesperson Jason van Rassel provided the following statement to The Albertan: “Drivers operating any kind of vehicle on a public highway are subject to the rules of the road set out in the Traffic Safety Act, the Criminal Code and associated regulations and this includes stopping for peace officers when directed.

“Sheriffs stopped the tractor and laid charges against the operator for refusal to provide a breath sample and resisting arrest. With the case now before the courts, we have no further comment on the allegations.”

Some time after Jeremia’s arrest, a second brother, Dominic Leussink, came to the scene and tried to remove the tractor. He was arrested and faces charges of obstruction, mischief and resisting arrest.

The tractor suffered extensive damage after being improperly moved at the scene, said Clinton.

The family has hired a lawyer and started a GoFundMe page to help cover legal costs.

Clinton says the family would like to have the charges against both brothers dropped.

“Despite anything they (sheriffs) might say, when you watch the footage you can tell there was brutality involved,” said Clinton. “It’s impossible not to look at this and know this went way overboard. It was a shocking and very stressful incident.”

Third quarter residential development sees uptick
Oct 22, 2020 3:00 PM
Comments
We welcome your feedback and encourage you to share your thoughts. We ask that you be respectful of others and their points of view, refrain from personal attacks and stay on topic. To learn about our commenting policies and how we moderate, please read our Community Guidelines.