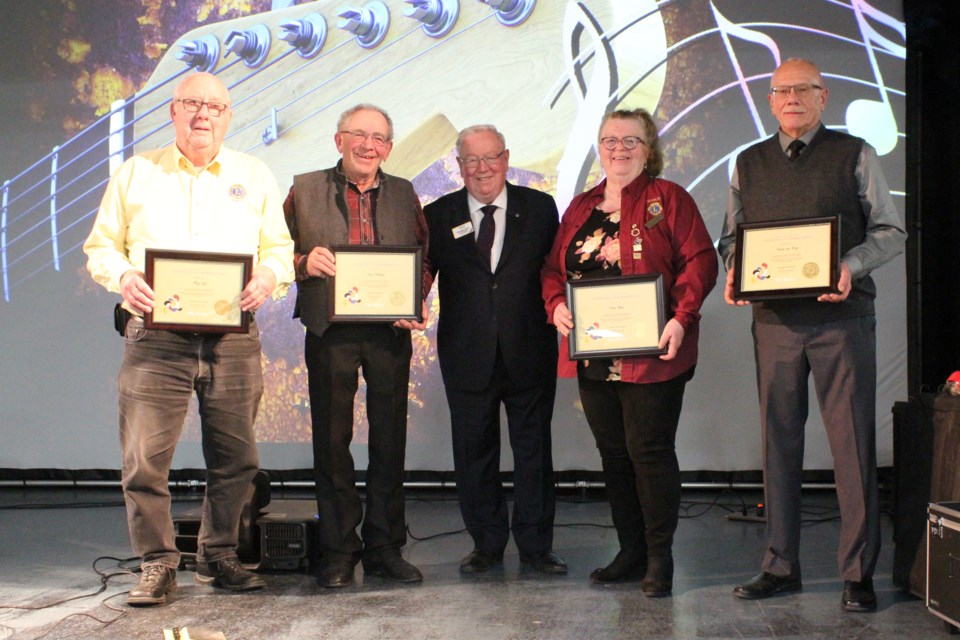 DIDSBURY - Sold out a week before the event, the Didsbury Lions Club's 75th anniversary charter gala was packed with 280 people. The gala took place on Saturday, Feb. 1 at the multi-purpose room in the Didsbury Memorial Complex.

The event featured several speakers, plenty of awards and certificates of recognition, a catered meal and the music of the Popoviches from Innisfail. The guest speaker was a judge, Brian Stevenson from Calgary's Northeast Eyeopener Lions Club, a past international president.

Born said all the speakers were very good and the music was great.

"I've seen the judge speak before," she said. "He's a very good speaker. The musical entertainment was very funny."

The evening began with an introduction from Born followed by dinner. After dinner were greetings from Didsbury mayor Rhonda Hunter and Didsbury-Olds-Three Hills MLA Nathan Cooper.

Among the awards were certificates of appreciation for long-serving Didsbury Lions Ray Lea, Vance Van Dam, Vair Whitlow and Born. In addition the club received a certificate of appreciation on its 75th charter anniversary from Lions International.

Stevenson then took the stage and did not disappoint. The former international president, who is in his 45th year as a trial judge, told many hilarious stories mostly from the courtroom.

He talked about a trial for an older lady who was caught stealing a can with six peaches.

"OK ma'am, I sentence you to six days in jail," said Stevenson. "I got up to leave and a man in the back got up and asked if he could say something. I said, 'go ahead.' Her husband said, 'she also stole a can of peas.'"

Stevenson also talked about the great service to community from the Lions through the past 75 years.

"One thing that hasn't changed over the years is the dedication and commitment of the Didsbury Lions Club to serve," he said. "Over 75 years this club has been in many ways the heart of this community. Over those three-quarters of a century the present 31 members and all former members have enriched the lives of their fellow citizens.

"Hundreds of projects and programs, some large, some small. All undertaken and completed. They continue today by sponsoring the bus you've heard about (and) supporting the food bank, which is a big project for this club. Their love for the youth of Didsbury by presenting school projects and scholarships to those outstanding young persons."

After several door prizes, the husband and wife musical duo of Richard and Deborah Popovich took the stage with their world class multimedia show.

The Popoviches performed classic country and western hits as well as pop/rock songs from the 1950s, '60s and '70s. In between songs, the duo engaged the audience with jokes and humorous banter.

Didsbury library remains very popular
Feb 17, 2020 6:25 AM
Comments
We welcome your feedback and encourage you to share your thoughts on this story. We ask that you be respectful of others and their points of view, refrain from personal attacks and stay on topic. To learn about our commenting policies and how we moderate, please read our Community Guidelines.