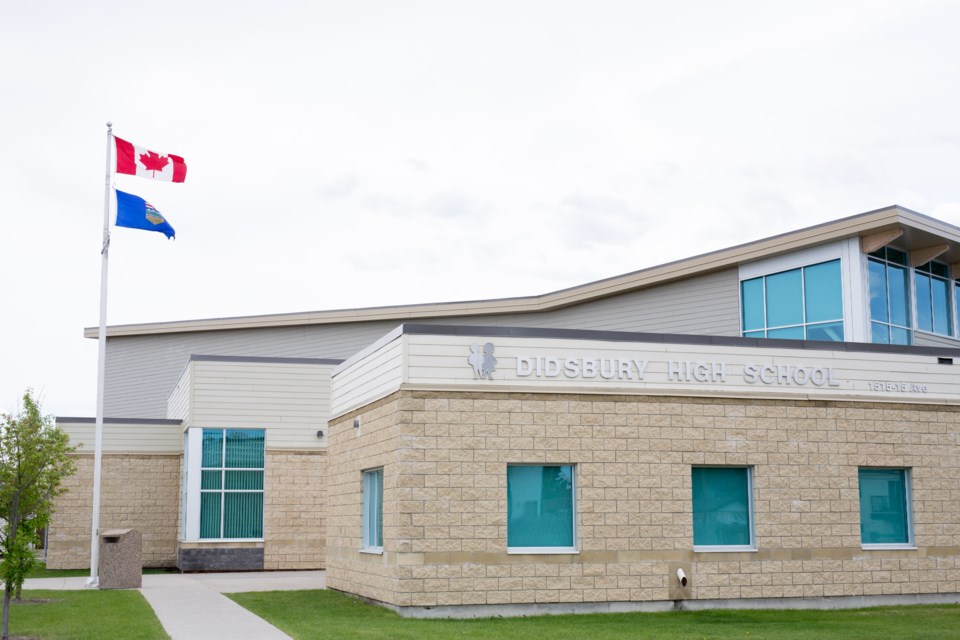 There are 55 graduating students in the Class of 2020 at Didsbury High.

Due to the COVID-19 pandemic, the school has had to change from a traditional ceremony in the school gymnasium to the new plan involving a drive-in style format, he said.

The intention is to have graduates, their families and guests sitting in vehicles during the ceremony, with officials using a stage and sound system set up at the front to conduct the proceedings, he said.

“We are going to run our greetings, our principal’s address and our valedictorian address over loud speakers and FM radio stations so each grad will be able to hear the words in their vehicles,” said Dagg.

“That is going to allow us to respect social distancing. We have shared our idea with all the grads already, and I think some of them are looking forward to it, thinking it is kind of something neat to do.

“We are thinking we should allow each graduate to come in a vehicle with their immediate family and then at least one more invitation vehicle per grad that would park at the back.”

During the outdoor ceremony, about five grads at a time will be called to the stage to receive their diplomas and congratulations from teachers and dignitaries.

Once the official ceremony has been completed, a parade of all the vehicles will make its way through town, he said.

“We feel that would allow the community a chance to acknowledge the grads,” he said, noting the parade route will be announced later.

Although no meal is planned for the graduation ceremony in August, work is underway to possibly hold some sort of sit-down event later in the year, he said.

“Our parents are looking at possibly having that event during the December break,” he said.

If all COVID social distancing guidelines are removed by the end of August, plans could change to have an in-school cap and gown instead of the drive-in format, he said.

“If, by chance, things go back to the way they were a year ago, we may choose to just bring them into the gym and carry on with a traditional ceremony,” he said.

The school has an electronic mail-out system to keep students and others up-to-date on any change in plans, he said.

The Carstairs event is planned to take place on Aug. 21 in the parking lot of the local arena.

There are 65 graduates in the 2020 class at Hugh Sutherland.

A stage will be set up in the parking lot, allowing dignitaries, the principal, and the two valedictorians to make their respective speeches.

As in Didsbury, the Carstairs graduates will be called forward from their vehicles to receive their diplomas and congratulations.

“The idea is for one student at a time to be on the stage to receive their certificate and any other awards they may receive,” said Kevin Hronek, teacher and guidance counsellor.

Although there are currently no plans to hold a parade of vehicles following the ceremony, planning is still underway on the details of the Aug. 21 event and on any possible meal later in the year, he said.

Even if the COVID restrictions are lifted, the drive-in ceremony will take place as planned, he said.

“We will do the August event regardless of whether the restrictions are lifted even more,” he said.

Principal George Thomson says rewarding the graduates with a ceremony is something everyone wants.

“Our grads’ hard work and dedication deserves some kind of a graduation ceremony,” said principal George Thomson. “We feel strongly that we want our grads to be recognized.”

Meanwhile, discussions are underway at Cremona School regarding whether to hold a graduation ceremony in June or August, officials said.

Cannabis bylaw public hearing July 21
Jul 8, 2020 10:30 AM
Comments
We welcome your feedback and encourage you to share your thoughts. We ask that you be respectful of others and their points of view, refrain from personal attacks and stay on topic. To learn about our commenting policies and how we moderate, please read our Community Guidelines.