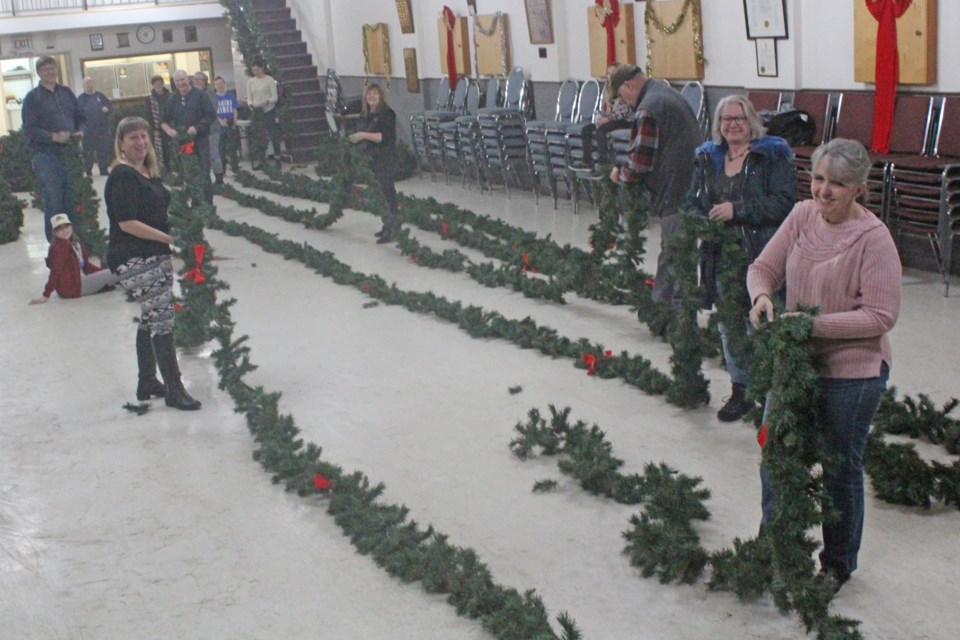 Volunteers straighten out garland at the Didsbury Elks Hall on Nov. 22 in preparation for decorating downtown Didsbury. The downtown decorations are a collaboration between the Didsbury & District Chamber of Commerce and the Town of Didsbury. Craig Lindsay/MVP Staff

DIDSBURY - Christmas decorations for the downtown core of Didsbury are back on thanks to the efforts of several concerned residents.

Deborah Forehead was one of the residents who weren't happy when they heard that there wasn't going to be Christmas decorations in town this year.

"I noticed there weren't any decorations up yet," said Forehead, who works at Didsbury Esso. "I thought that was odd but didn't think too much of it. Didsbury Esso is under new ownership and I wanted to see how we could get involved with the garland and bows and become part of that tradition. So I phoned (the chamber) and asked and that's when I found out there weren't going to be any decorations this year."

The Didsbury & District Chamber of Commerce, which puts up the decorations each year, had planned to not do it this year citing the cost and a lack of volunteers.

"I just thought that can't happen," she said. "It's not just about the spirit of the season - it's about the spirit of community. The organization of our town need to understand that they can call out to their local residents and businesses when they are in need. Granted, sometimes that call needs to be very loud but generally the community will step up."

Forehead posted on social media about the town not having Christmas decorations and got a very strong response.

"The post I made was to inform and rally the community," she said. "Apparently it did exactly what I wanted it to. We had people step up wanting to volunteer. It was huge."

Forehead said she wasn't surprised to see the community step forward as she has seen it before.

Laurie Klassen, vice-president of the Didsbury & District Chamber of Commerce board, said that after hearing from a number of people, the chamber reconsidered.

The chamber board met with council later that Monday (Nov. 18).

"The town is stepping up," she said. "It's going to be a joint effort between the town and the chamber to make sure this gets done because the community has spoken and this is very important to them. We're pleased that a joint effort is going to happen as we move forward on this."

Klassen said the decorations are expected to be up in time for Didsbury's Country Christmas celebration on Nov. 29.

Putting the decorations up this year once again was Ron Townrow of Grapevine Tree Care and Lands.

Didsbury mayor Rhonda Hunter said council was happy to get behind the Christmas decorations.

This week, council approved spending $2,000 to help with the cost of putting up the decorations.