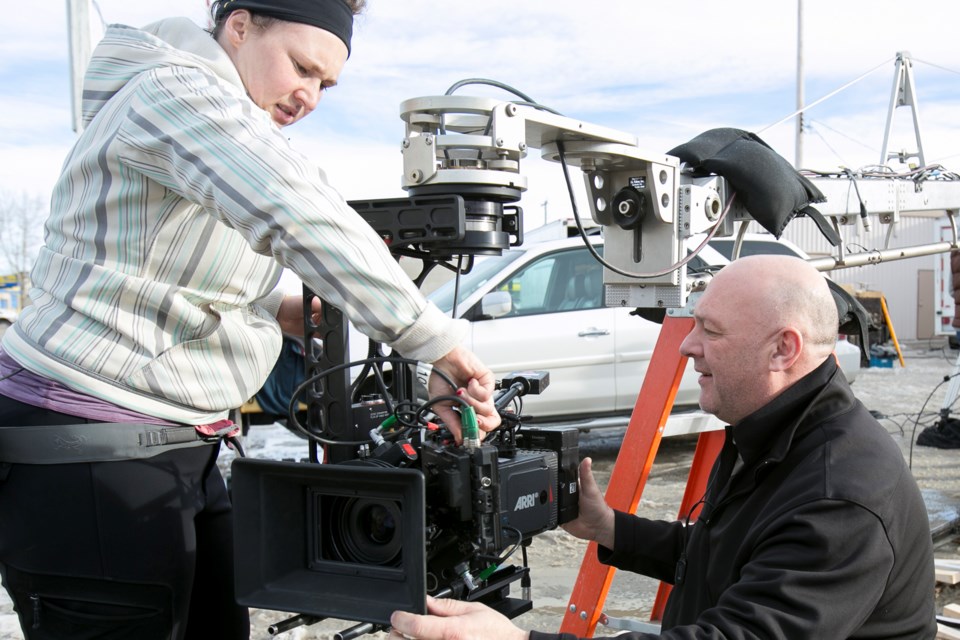 Camera assistant Ivona Mikulic, left, and assistant cameraman Cory Budney set up a camera on a camera jib arm while preparing for a scene during the filming of Wynonna Earp in Didsbury a couple years ago. File photo/MVP Staff

Hunter has penned a letter to Olds-Didsbury-Three Hills MLA Nathan Cooper regarding the matter. The letter was presented to town council at its recent regularly scheduled meeting.

“More investment needs to occur to realize Alberta’s full potential,” Hunter said in the letter. “This is the time to look at all areas of diversification for our province, and the filming industry in Alberta should be looked at as a way to increase revenue and to diversify Alberta’s economy.

“The province benefits from the film industry due to the number of Albertans employed through their projects. Communities hosting those projects also benefit because of the film industry utilizing the businesses and services in those towns, participating in programs and buying their homes in our communities.”

Other provinces such as B.C. and Quebec spend much more in support of their respective film industries than Alberta, she said.

“These provinces are leading the way with initiatives promoting profound contributions to local economies,” she said.

Council received the letter as information. It is being forwarded to other municipalities for comment.

The letter will be forwarded to Cooper after comments are received from other municipalities, says Hunter.

Didsbury fire destroys trailer, vehicles
Jul 6, 2020 3:10 PM
Comments
We welcome your feedback and encourage you to share your thoughts. We ask that you be respectful of others and their points of view, refrain from personal attacks and stay on topic. To learn about our commenting policies and how we moderate, please read our Community Guidelines.