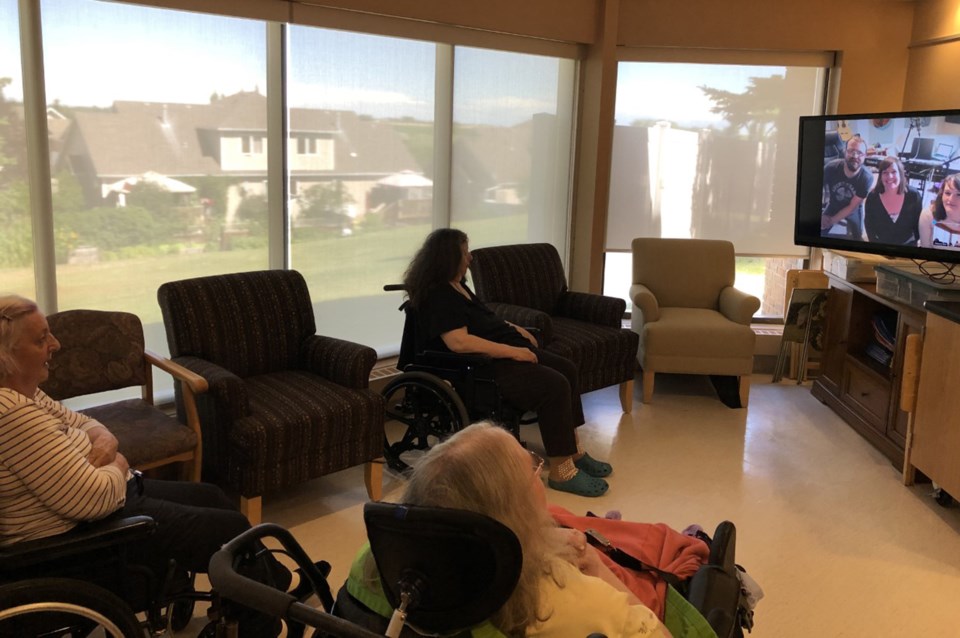 DIDSBURY – A song composed by five continuing care residents at the Didsbury hospital is doing what it was meant to do – bring joy to those who have a chance to hear it.

Titled “Don’t Look Back” the song was written over the past year as part of the music program at the facility, said Kelly Kalden, who uses music as a therapy for continuing care residents at Didsbury hospital.

“I coached them through the process of writing the song,” said Kalden, who conducts music programs at care facilities across the province and is a songwriter herself. “It was a way for them to talk about some of the things they have experienced in life.”

The song’s lyrics include the following lines: “This is our song. Let’s tell people about it. We are freedom. We are the ones. Open the door. Find the golden key.”

A video of the song being performed by Kalden has already received more than 140,000 views online, including by one very famous singer.

“Originally when we started the song, I asked them if there was someone who inspired them,” she said. “They all said right away that Barbara Streisand inspired them. The whole group was onboard with that right away.

“They were smitten by her and so she was always the one we were writing this for. She was sort of our shining light that kept us going with the song.”

Streisand has heard the song and sent congratulations and greetings to the songwriters.

“We wanted Barbara to sing this song,” she said. “I got a message from one of her staff three days after the video was online. The message (from a Streisand staff member) was ‘I shared it with Barbara and she loved it and she would like to share it to her Facebook and Twitter accounts.' Once she shared it, it pretty much doubled (in views) in a day.”

In the video, co-writer Brenda Jones says, in part, “Of all the things that are going on in the world today we all need a little bit of hope. This song inspires the young and the old and it makes them feel a lot better.”

The video was recorded outside the Didsbury hospital with the help of Albert Health Services media staff.

“They did such a nice job,” she said. “The idea was to put the video out to get people inspired and excited and give some positivity at this time. We’ve got such positive feedback.”

Asked if she thinks Streisand will actually sing the song, Kalden said, “She’s an extremely busy person, but I always say never say never. We never in our lives thought we’d get a message from her people.”

A recording of the song was recently made at a Aaron Young's studio in Calgary, thanks in part to a generous anonymous donor.

“We are now able to produce it,” she said, noting that the recording session itself was shown to the songwriters live through Zoom.

The recording will be pressed into CDs for distribution to friends and family, as well as to radio stations and music sharing services, she said.

“We will try to get it into as many places as possible,” she said.

The composing and success of the song has been a great experience for everyone involved, she said.

“They have contributed something very special to society,” she said. “It’s been rewarding on several levels. It’s lifted all of us up.”

The video of “Don’t Look Back” can be viewed on YouTube.