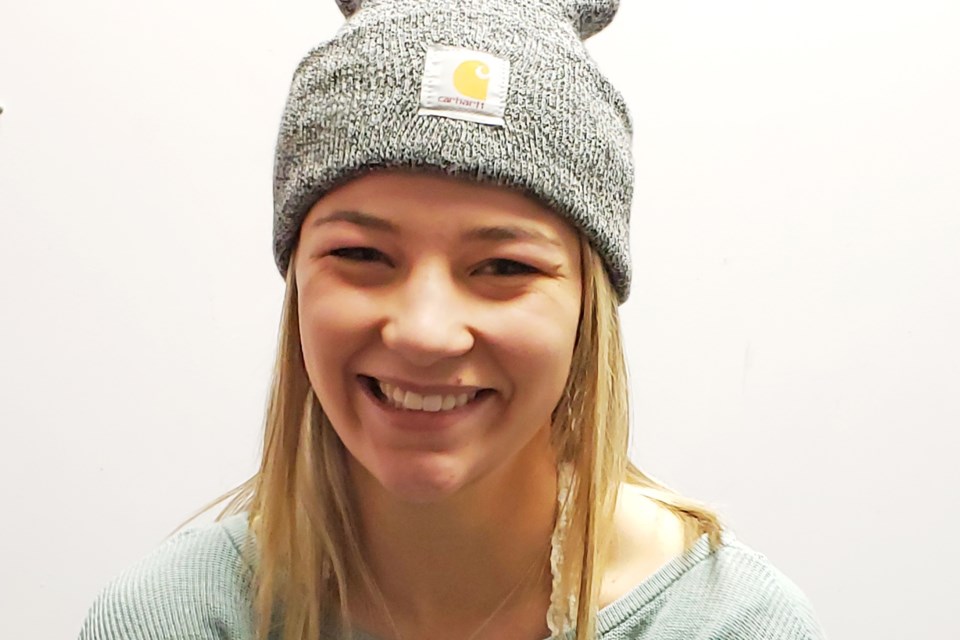 DIDSBURY - It's been quite a journey for Didsbury High School student Sydnee Doiron, who was recently named the 2020 Champion Child for Alberta Children's Hospital in Calgary.

After suffering a stroke while having heart surgery in Edmonton in October, Doiron had to learn to walk and talk at the age of 15.

Sydnee was always a happy, healthy child who loved to dance and surf. It was quite the surprise to the family when she was diagnosed with a serious heart condition and learned she would require major heart surgery at the Stollery Children's Hospital in Edmonton.

When Sydnee awoke from surgery she couldn't speak, read, recognize letters of the alphabet or even remember her sister's name. her entire right side was paralyzed. She recognized her parents but her only ways of communicating with them were eye contact or limited movements.

An MRI revealed that Sydnee had suffered a massive stroke during the surgery. It would take months and months of rehabilitation for her to be able to talk again as well as walk.

With hard work and resilience, she was able to return to school in Didsbury and get back to doing most of the things she was doing before the setback.

Sydnee was thrilled to hear she had been named the champion child for 2020 although she did struggle to keep it a secret for a couple of months before the gala event and official announcement.

"I heard about it in August and had to keep it a secret a pretty long time," said Sydnee. "I almost let it slip a couple of times but we managed to keep it under wraps."

Sydnee and her family – father Ron, mother Michelle and sister Kaenna – travelled to Calgary on Jan. 10 for the gala ceremony. She was also interviewed for stories on Global News and CTV.

Michelle said her daughter was chosen for her resiliency in coming back from such a terrible setback.

"They choose a child who has serious medical issues who can overcome a lot," said Michelle. "She has lots of resilience and a positive attitude. (They want) someone who will represent the hospital well."

The Doirons first noticed something was a little off with Sydnee back in October of 2018.

"I'd come up the stairs every morning and was out of breath," said Sydnee.

Sydnee was eventually diagnosed with coarctation of the aorta, a congenital condition where the aorta is narrow.

In August of 2018 Sydnee went into the Stollery Children's Hospital in Edmonton for heart surgery. During surgery she had a massive stroke.

"There was only a one to two per cent (chance) of a stroke during surgery," said Michelle. "It was one of the lowest of the lowest risks of having. She drew the short straw."

Sydnee was kept sedated after surgery and ended up having a seizure that night, said Michelle.

"After a couple of CT scans it showed she suffered a severe stroke on her right side of her brain which affects the left side of the body," she said. "Then the neurologist showed us the picture of the CT scan and told her father (Ron) and I that anything you see in white is where there is brain damage. That's all I could see was white. It was a very scary moment for her dad and I."

The Doirons were worried that they would never hear their daughter's voice again or see her walk or be a normal teenager again.

"When she woke up she couldn't speak, she was paralyzed on the right side of her body," she said. "With a lot of determination and hard work she was able to walk and speak. She had to relearn everything from her ABCs to numbers and spelling."

Sydnee was transferred from the hospital in Edmonton to Alberta Children's Hospital in Calgary where she would begin a very long road to rehabilitation.

She worked hard with physiotherapists each day to learn to walk again. She worked extensively with occupational therapists to redevelop her fine motor skills.

"Her speech came back slowly, one word at a time," said Michelle.

Sydnee recalls her first words being about asking for several puppy dogs.

"That day there were pets that came through," Sydnee said. "I said, 'Mom, I want dog.'"

"Those were the first words she was able to string together," said Michelle. "They had pet therapy that day. I said I'd get her 10 dogs if she kept going."

Sydnee said that being in the hospital was difficult but the great staff in both Edmonton and Calgary made the experience much better.

"Everyone from doctors to nurses to therapy teams," she said.

Sydnee ended up attending Gordon Townsend School while at the children's hospital, which is located in the hospital basement.

"She went there from October 2018 until January 31, 2019," said Michelle. "She did maybe 10 minutes of school work a day. She went to school from 9 a.m. to 3 p.m. every day. The rest of the time was all therapy – speech therapy, occupational therapy, physical therapy."

After being discharged from children's hospital, Sydnee stayed with her mom at Ronald McDonald House in Calgary so she could continue with therapy.

"The driving would be very taxing on her brain and she wouldn't get much out of therapy," said Michelle. "We're very fortunate it's there. I don't know how we could've done it without Ronald McDonald House or the children's hospital."

Sydnee is currently taking half-day classes at Didsbury High. She still gets fatigued but she is working to improve. She's learned to write and play trumpet with her left hand since her right, and dominant, hand was compromised by the stroke.

"She's doing very well with that," said Michelle. "We had to have the pinky holder switched over for the left hand. That was a big learning curve."

Sydnee is also still involved with dance although instead of competing she now helps teach.

"I'm helping out teaching some solos and duets at Dawn's (School of Dance in Carstairs)," she said. "I'm happy with teaching now since I have a good grip on it. If I can't come back to dance I'll be a teacher. I find that really fun to work with the younger students."

Another of Sydnee's big loves is surfing. She enjoys riding the waves and feeling the wind in her face. After the stroke Sydnee was worried she wouldn't be able to surf again.

"One of the dreams I had this summer was to surf again," she said. "I was afraid I wasn't going to surf again. I got up the first day and tried it. I let go of the rope and it was lots of fun."

The family has a spot on Lake Koocanusa in B.C., which was where Sydnee was able to hit the surf again.

Sydnee is looking forward to all the opportunities she'll get working as the Alberta Children's Hospital's Champion Child.

"I actually get to travel to Orlando, Florida for a weeklong conference in April," she said. "I was one of 12 kids throughout Canada chosen for this so I'll get to meet all the other ones."

Michelle said the kids and all their families will be in Florida where they will get to tell their stories and promote their hospitals.

"She'll be involved with other hospital functions throughout the year," she said. "Dairy Queen is a big sponsor. The Brick is a big sponsor. Walmart and Re-Max as well. She'll be doing different things promoting the hospital. We'll be volunteering at the Radio-thon in February as well."

Michelle said they just want to help the hospital out as much as they can.

"The hospital was a pretty special place to me and my family," said Sydnee. "They got us through the hardest six months of my life. We just want to help out and give back to the hospital."

The gala ceremony on Jan. 10 at the unveiling was a great time, said Sydnee.

"We were allowed to invite so many of our family and friends and what staff we wanted included from the children's hospital," said Michelle. "There were a bunch of nurses there, cardiology, physio, speech, the Gordon Townsend staff."

"Almost the whole hospital was there," joked Sydnee.

"They had speeches," said Michelle. "We got to visit with everyone and have snacks and coffee. It was a very neat time."

While at Alberta Children's Hospital in Calgary, Sydnee was able to meet several of the Calgary Flames such as Sean Monahan, Johnny Gaudreau and her favourite Matthew Tkachuk.

"It was pretty cool for her to meet those guys," said Michelle. "In fact, in her speech at the launch for the champion child, she said, 'He doesn't know it yet, but Matthew Tkachuk is indeed my boyfriend.'"

She also got to play a game of wheelchair hockey against the Calgary Flames during the Gordon Townsend Annual Wheelchair Hockey Game, while attending school there.

"The Flames have been doing this for years and it's a huge highlight for the students attending Gordon Townsend School," she said. "This was a very, very exciting day for Sydnee as our whole family are diehard Flames fans."

Didsbury playground a community effort
Jul 4, 2020 4:30 PM
Comments
We welcome your feedback and encourage you to share your thoughts. We ask that you be respectful of others and their points of view, refrain from personal attacks and stay on topic. To learn about our commenting policies and how we moderate, please read our Community Guidelines.