Essentials For Our Community helping many 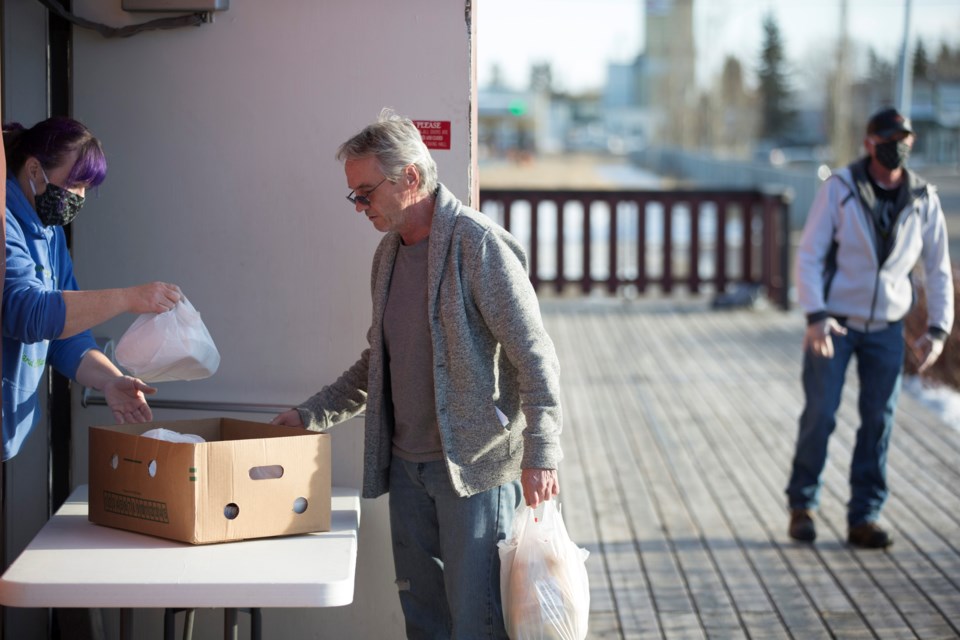 A resident picks up meals at an Essentials for our Community event at the Didsbury train station. File photo/MVP Staff

DIDSBURY – Although it formed five years ago, the Essentials For Our Community (EFOC) support organization has never been busier, with volunteers preparing hundreds of meals each week for people facing hard times during the COVID-19 pandemic, says president Sheree Andrews.

The all-volunteer not-for-profit society has been preparing and distributing many food hampers to Didsbury and area individuals and families in recent months, she said.

“We’ve been very active,” said Andrews. “We’ve been giving out an average of 220 meals a week. Those are frozen and fresh meals going out.

“They are going to seniors and low-income people, a lot of whom are experiencing hardships and some are quarantined. When they are not able to get out for pickups we offer them meal deliveries.”

The pandemic has created hardships for people across the district, many of whom are waiting for COVID-19 relief, she said.

“There are some families that have children who have waited two months and they are running out,” she said. “It is going to take them a bit of time to catch up.

“This has been helpful to them because at least they know they have food security. Food security is so essential for people because when they know they are OK to eat they can really focus on the rest of the problems.

“People will always worry about food first and we are able to take that pressure off.”

The meals are prepared by volunteers at the train station and sometimes at the Zion church kitchen, she said.

“We have a couple of teams of volunteers who prepare the meals. We do all the cooking ourselves,” she said.

The meals are all dinners, “but they are good healthy portions so sometimes people are using the leftovers for lunches the next day if they have a smaller appetite.”

“We have free fruits and vegetables set out so people can come and get what they want,” she said. “Quite often we also have toilettes and other essentials.”

Funding and other support for EFOC has come come from individuals, businesses and the municipality, as well as through volunteer fundraising efforts, she said.

“It all been about the generosity of our local people,” she said. “Every time I go to the post office there are cheques. The town has really risen up.”

There have also been donations of local farm food products, she said.

The Town of Didsbury has launched a fundraising effort in support of EROC, where residents and businesses can purchase signs thanking essentials service workers and the funds raised going to EROC.

The efforts of the society’s many volunteers have been critical, she said.

“Some of them are on their feet for 12 hours at a time cooking to keep up with this,” she said.
The society has been approved for a government grant but hasn’t yet received that money, she said.

Anyone interested in making a donation to EFOC can do so at PO Box 355 in Didsbury, by etransfer at efocdidsbury@yahoo.com, or by dropping off donations at the train station on Tuesday’s from 9-11 a.m.

Didsbury council approves reopening of facilities
Jun 30, 2020 6:00 AM
Comments
We welcome your feedback and encourage you to share your thoughts. We ask that you be respectful of others and their points of view, refrain from personal attacks and stay on topic. To learn about our commenting policies and how we moderate, please read our Community Guidelines.