Councillor who voted against award says giving recognition would be a public embarrassment
Nov 20, 2020 3:00 PM By: Dan Singleton 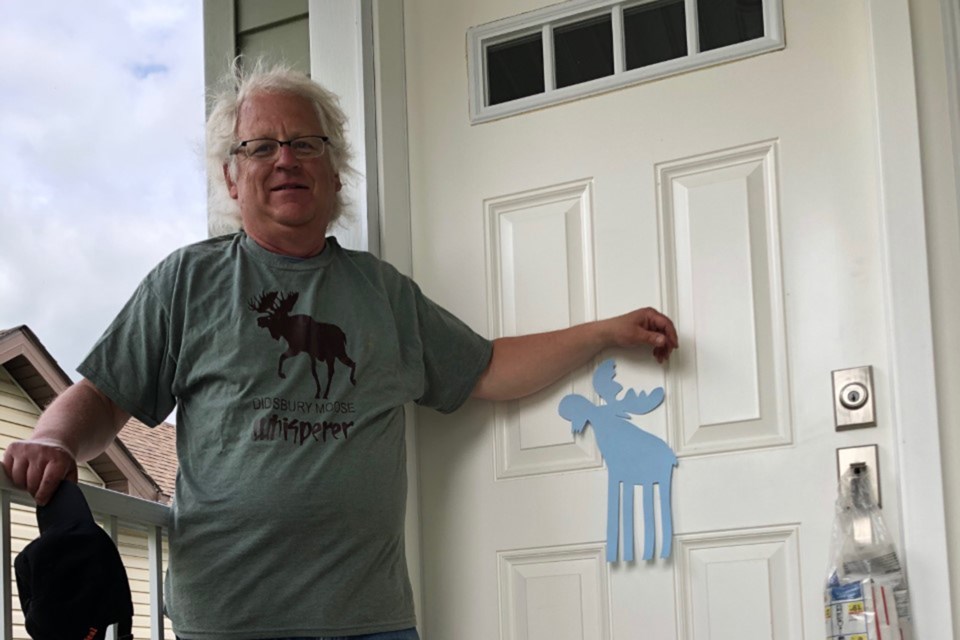 Kevin Bentley poses with one of the moose cutouts he made and distributed to area residents as part of his Moose Project to raise spirits and morale in town. File photo

DIDSBURY - Resident Kevin Bentley has been officially recognized by the Town of Didsbury for his Moose Project community promotion undertaking.

The special recognition award under the town’s community recognition policy came by way of a 5-2 split decision at the recent regularly scheduled council meeting, held by teleconference.

Bentley’s Moose Project involved him placing moose shaped cutouts on residences throughout the municipality to raise morale and spirit of residents.

Moose are a common sight in Didsbury, often seen in yards and other green spaces.

Bentley was nominated by resident Cathy Hawkins. In her letter to the town, Hawkins called his project great for the community.

“Single-handedly, Kevin cut out and walked all around town in the early hours of the morning to paste moose on every front door in our little town, and he managed to do it without disturbing a single dog,” said Hawkins.

“Kevin’s action boosted the morale and spirit of our little town right at a time when it was needed most during this pandemic. When most people were getting frustrated, he spread smiles and joy.

“I am sure that I speak for every resident of Didsbury in agreeing that Kevin Bentley has made a difference in our little town and our world.”

The community recognition policy is in place to bring “public awareness to special occasions and events which enhance the health, welfare, safety and cultural diversity of the community.”

The policy’s purpose is to recognize individuals, groups, and businesses for their “exemplary commitment to demonstrating excellence which contributes to enriching the quality of life in Didsbury."

During the Nov. 10 council meeting, Coun. Bill Windsor spoke against the motion.

“This is an individual who this council stripped the community leadership role to the Canada 150 celebration because he deliberately and maliciously attempted to sabotage council’s recreation survey,” said Windsor.

“Council also approved invoicing this individual for the staff time costs associated with identifying and filtering that attempted sabotage; an invoice that remains outstanding.”

Windsor said he would not be voting in support of the motion.

“This is an individual who continuously criticizes, attacks and conjurors distain towards this council in news and social medias,” he said. “Giving recognition would be a public embarrassment, disrespected the efforts and energies of a multitude of other volunteers in our community and our town staff. I cannot support this motion.”

None of the other councillors commented on the motion during the council meeting. In calling the vote, Town of Didsbury Mayor Rhonda Hunter did not say who voted for or against.

Following the meeting, Hunter said the vote was five for and two against.

As part of the award, Bentley will receive a letter of recognition from the mayor on behalf of council.

For his part, Bentley has said he undertook the Moose Project to promote community spirit.

“It’s all about putting smiles on people’s faces,” said Bentley.

In May 2019, Bentley sent a letter to the Town of Didsbury taking responsibility for submitting 766 responses to the recreation survey, which ran from March 18 to April 19, 2019.

“I am writing today to confirm I, and only I, am responsible for the submission of additional outlying plan survey results beyond my own,” he said in the letter.