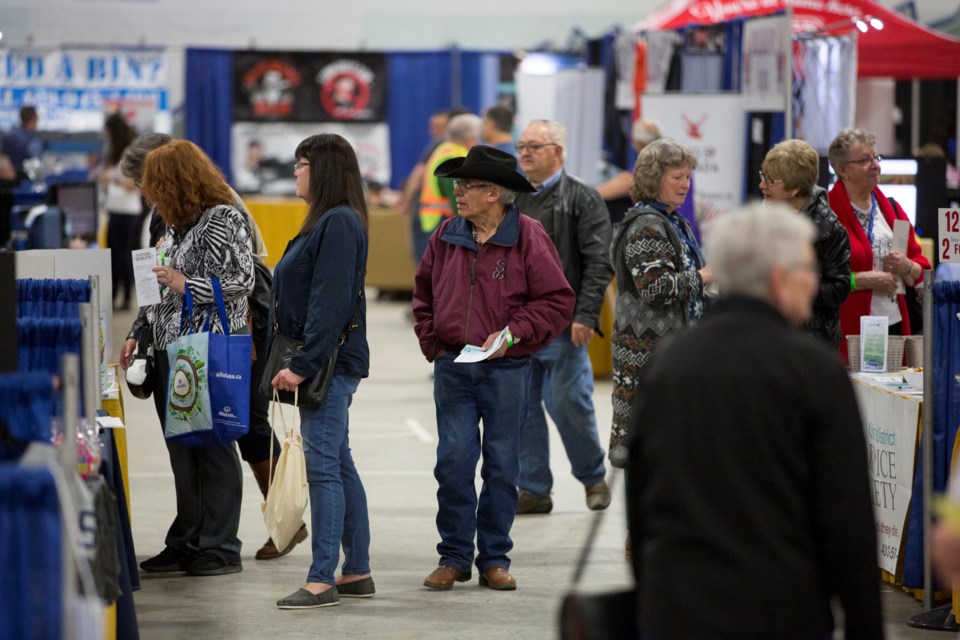 People browse through the offerings of the Didsbury chamber's trade expo in 2019. Chamber officials have asked the Town of Didsbury to help co-present events like the expo. File photo/MVP Staff

DIDSBURY - Didsbury & District Chamber of Commerce is looking for more collaboration from the Town of Didsbury.

Chamber directors Brian Chita, Laurie Klassen, Kyle Turner and Greg Poirier each addressed council during the meeting on Feb. 11 giving information about the chamber and the many events the organization does each year in town.

The chamber then asked council to consider having the town work with the chamber in a "unique collaborative opportunity."

"The town council, town and chamber have been working tirelessly together towards a great partnership for the last year and a half with many meetings collaborating together for a better Didsbury," said Klassen, vice-president of the chamber.

"We now have an opportunity to present to the Town of Didsbury that will show this great partnership to our community."

Turner told council that he drew "the short straw" and had to make the ask.

"What we are here to propose today is that the Town of Didsbury co-present our three biggest events of the year: the Didsbury Trade Show, the small business awards, and the continued support of Country Christmas, that kind of started last week with the putting up of the garland," said Wilson.

"What we're looking for is the in-kind donation of the use of the Memorial Complex for the trade show coming up as well as for the small business banquet later in the year."

Turner said that in return the chamber would offer $10,000 in advertising that it does for those campaigns as well as a complimentary booth rental at the trade show and four free tickets to the awards banquet.

Coun. Bill Windsor asked what part of the complex the chamber would need. Wilson replied the whole complex for the trade show and just the multi-purpose room for the awards banquet.

Mayor Rhonda Hunter asked whether the town would also then share in the profits from the trade show.

Chamber president Brian Chita clarified that it would be a collaboration, not a partnership.

"It's defined a bit in your package as a collaboration or affiliation," said Chita. "Partnership denotes a whole group of different things in how they want to look at it.

“We're approaching the town with our proposal to come alongside and join in with what we're doing."

Chita pointed out the benefits in the package given to council.

"The big thing is it would show the unity and spirit of the community," he said. "It's not just the chamber but the 80 businesses that come with us. It's about promoting the community in a greater way."

Poirier told council that the revenue from the annual trade show goes back to the chamber to run the chamber for the rest of the year.

In a vote later in the meeting, council voted to refer the "ask" from the Didsbury & District Chamber of Commerce to an upcoming Policies and Priorities meeting.