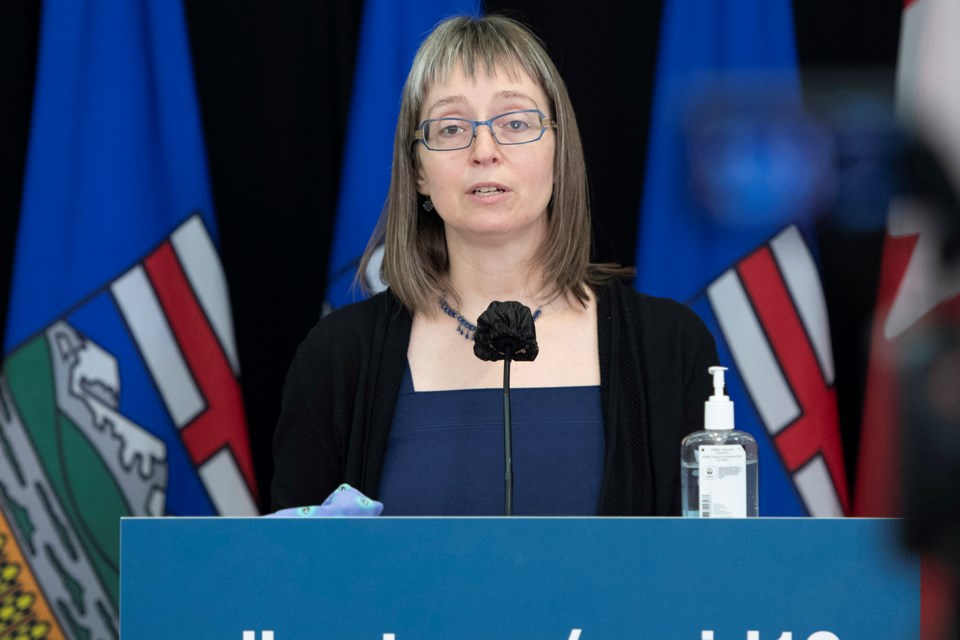 Alberta's chief medical officer of health, Dr. Deena Hinshaw, provided, from Edmonton on Feb. 11, an update on COVID-19 and the ongoing work to protect public health. She said 16 deaths had been reported in the previous 24 hours, which included one from the Didsbury local geographic area. Chris Schwarz/Government of Alberta

DIDSBURY - The area has recorded its first COVID-19-related death, according to Alberta Health Services (AHS).

Eleven months to the day the World Health Organization declared a pandemic on March 11, 2020, provincial government officials released data showing a person from the Didsbury local geographic area had died a related death.

It was the first such death AHS identified as being related to the disease caused by SARS-CoV- 2 in an area spanning from the Didsbury area in the north, past the Carstairs area in the south, west past Water Valley and east past the Sterlingville area of the county.

“Sadly, I must announce that 16 new deaths were reported to Alberta Health in the last 24 hours,” said Dr. Deena Henshaw, chief medical officer of health, during a Feb. 11 press conference held to give a COVID-19 update.

Up until that day, deaths related to COVID-19 were listed as zero for AHS’s Didsbury local geographic area that encompasses the urban areas of Didsbury, Cremona and Carstairs as well as south Mountain View County. The most recent update as of the end of day Feb. 9 also counted 11 active cases in the area and 144 recovered cases.

On Feb. 11, statistics for the end of day Feb. 10 were released. The number of deaths in the local geographic area went from zero to one.

Little demographic information was released about that death or the 15 others reported on Feb. 11.

Hinshaw said they were people between 53 and 97 years old.

That brought the total number of deaths related to COVID-19 reported in Alberta to 1,744 as of end of day Feb. 10.