A lifetime of volunteering in Didsbury through music 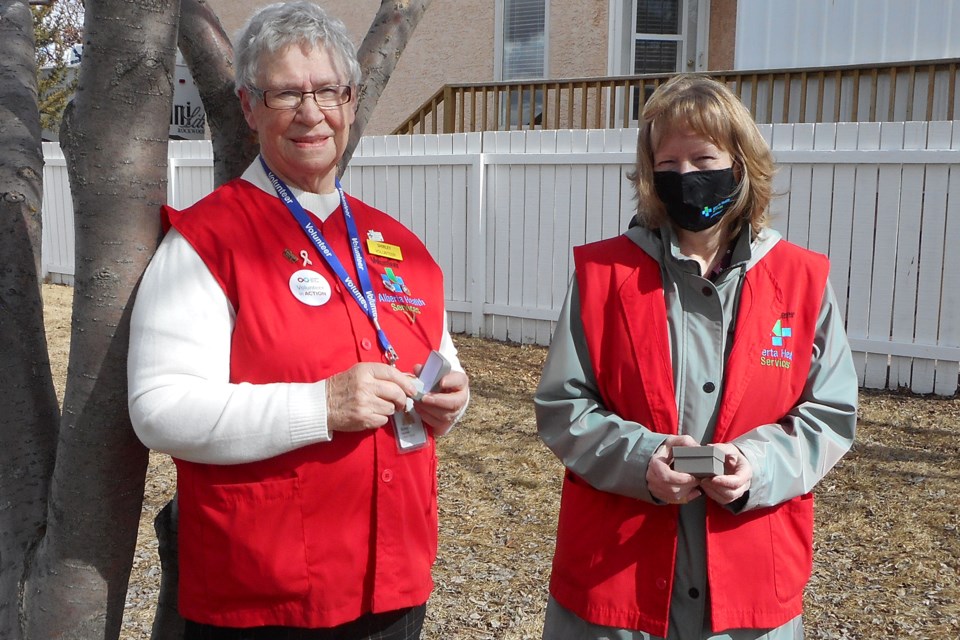 DIDSBURY - Shirley Thompson has spent decades volunteering through music, performing solo and with other musicians in area seniors homes, nursing homes, lodges and many other venues.

Sharing her love of song with countless music fans has all been worthwhile, she says.

“When you play music you are always in demand,” she said. "I've had a lot of fun."

Shirley was recently recognized by the Alberta Health Services (AHS) volunteer resources department for 40 plus years of volunteerism.

A brief ceremony was held in Didsbury on March 22 where she received a pin and a certificate.

Over the years Shirley, 85, has volunteered in various capacities with the Women’s Institute, the Royal Purple, AHS and other organizations.

Originally from northern Alberta, Shirley took up the piano at a young age when her father discovered she had a love of music.

“I started out on the pump organ,” she said. “My dad knew I had an ear for music. There was a certain music I could pick up by ear. He took me to this music teacher and she said, ‘I won’t teach you. You have an ear for music’.”

She taught herself to play and to read music. Today she plays piano and accordion.

She explained that she prefers to play traditional songs from the early 1900s and onwards.

“I play the older music, the ones that the seniors relate to,” she said. “I play songs with lots of rhythm to it. When I get in there with the traditional music it livens them up and keeps them active. Some of these seniors wanted to dance so we danced too. That’s the kind of music I enjoy too.”

Since moving into Didsbury in 1965, Shirley has played at lodges, nursing homes and other facilities across the region.

“I’ve been to Olds and Carstairs and Three Hills and elsewhere. I’ve been all over,” she said.

As well, she has travelled across Canada as a member of the Didsbury Elks patrol team band.

“We played all over the county. I’ve been out to Gander (Newfoundland), Yellowknife, and pretty near every town in Alberta that had an Elks lodge,” she said, noting she has also played in house bands over the years.

Over the years she has accumulated a vast collection of sheet music.

“I’ve ended up with lots of music. When the people I’ve played with passed on, their families have sometimes given me the sheet music. I have different suitcases of music for different venues,” she said.

Although electronic keyboards are commonplaces these days, she says she still prefers to play an upright acoustic piano.

Volunteering wasn’t the only thing that kept Shirley busy over the years.

“The best job I ever had was as custodian at the (Didsbury) high school. I was there for 21 years and really enjoyed it,” she said.

While the COVID-19 pandemic has put the brakes on the live music performances over the past year, she says she hopes to be back at it when the pandemic ends.

“This has been really tough with this lockdown business,” she said, noting she has been "getting in lots of reading" these days.

“She’s great in the fact that she’s always one to say yes,” said Beaudet.