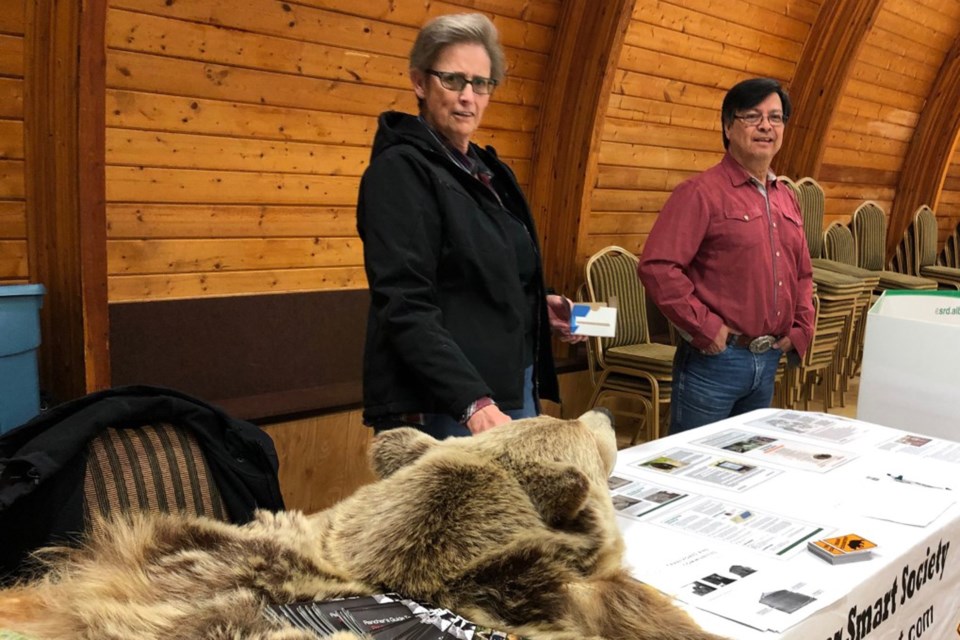 CREMONA – With bears expected to start moving out of their dens in the coming weeks -- and at least one already having done so in the Banff area last week -- area farmers, ranchers and acreage owners are being advised to make sure their properties are free of attractants left over from the winter months.

Paul Fraser, president of the Mountain View BearSmart Society (MVBS), was one of the key speakers at last week’s Agriculture and Wildlife – Managing Conflict workshop at the Cremona Community Hall.

“Make sure that the bone yard's well cleaned up,” said Fraser. “If things are cleaned up after the winter there won’t be the attractants for the bears and they won’t hang around.”

Although bears do not typically come out before the end of March, they can come out earlier, he said.

“Just beware that if it’s warm there is the potential for bears to come out early. The males will be the first ones out, both the grizzly and black bears,” he said.

Unlike bears, cougars are active throughout the year and are always hunting for food, he noted.

“Whether it is a dog or a cat or a cow or a sheep or a goat or deer, they will take any of that,” he said.

MVBS works with landowners, businesses, municipalities and others to raise awareness of bear and cougar activities in the region, stressing the need to avoid unwanted encounters.

The society operates a bear sighting and occurrence website detailing reports made by public members and Fish and Wildlife. There were more than 90 bear sightings reported in 2019, up from 60 in 2018.

A study of bear sightings in the region shows they are often associated with properties that have both forest cover and buildings present, native grassland or shrub cover within 250 metres of forested habitat, and riparian habitat, he said.

Conflict reduction activities that have proven effective include electric fences around beehives and livestock yards, as well as the use of bear-proof garbage bins, he said.

Success stories for MVBS include the completion of a bear hazard assessment, annual Bear Awareness Week public open houses, numerous bear and cougar awareness events, including many school visits, the installation of bear awareness road signs across the district, and display booths at trade fairs, he said.

Challenges facing the society include maintaining interest and participation within the community and with volunteers, maintaining funding and grants, replacing and maintaining bear signage, and maintaining support from and liaison with Mountain View County to promote use of bear-proof garbage containers for residents west of Highway 22, he said.