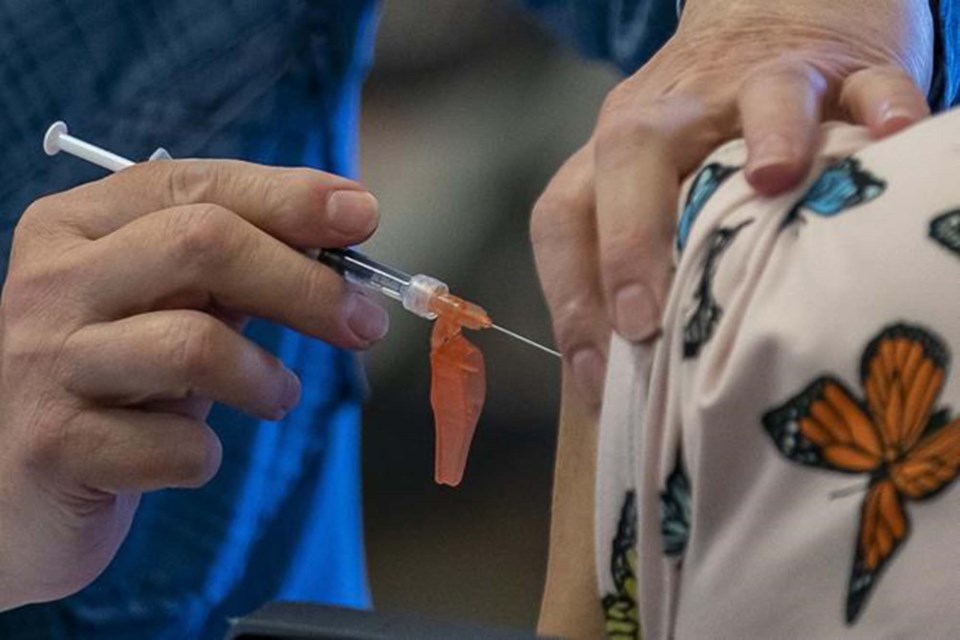 A person receives a COVID-19 vaccine at a vaccination clinic run by Vancouver Coastal Health, in Richmond, B.C., on April 10, 2021. THE CANADIAN PRESS/Jonathan Hayward

OTTAWA — The federal government is expecting Moderna to make good on a previously promised batch of 855,000 COVID-19 vaccine doses that were expected last week, but have yet to arrive.

Those delayed doses along with a little more than one million shots of the Pfizer-BioNTech vaccine represent the extent of Canada’s expected vaccine deliveries this week, even as the number of new COVID-19 cases across Canada continues to surge.

Officials have indicated there could be a similar delay in the delivery of 1.2 million doses from Moderna next week.

“It’s prudent planning on our part right now to bank on the last week of April,” Fortin said.

In comparison, Pfizer-BioNTech has been consistently delivering more than 1 million shots to Canada each week for more than a month, a trend that is expected to continue for the foreseeable future.

The Public Health Agency is not expecting any shots of the Oxford-AstraZeneca vaccine this week. Canada has also approved a vaccine produced by Johnson & Johnson, but it is not clear when the first of those doses will be delivered.

The rush to get vaccines into Canadians' arms has grown more urgent as Canada continues to see a massive spike in the number of new COVID-19 infections.

Thousands of new cases were reported on Sunday, including a record 4,456 in Ontario alone. Dr. Theresa Tam, the country's chief public health officer, noted admissions to intensive care units surged 23 per cent last week compared to the one before and said the Canada is approaching the peak of the current pandemic wave.

Tam said many of those getting sick are younger than in previous COVID-19 surges, which experts have blamed on virus variants that are spreading across the country.

That has prompted some provinces to start looking at changes to how they are distributing their vaccines.

More than 10 million doses had been distributed across Canada as of Sunday afternoon, according to covid19tracker.ca, with nearly 8 million having been administered.

Almost 20 per cent of the population has received at least one shot.

This report by The Canadian Press was first published April 12, 2021.

Note to readers: This is corrected story. A previous version said Canada was only expecting one million doses of Pfizer-BioNTech's vaccine to be delivered this week.