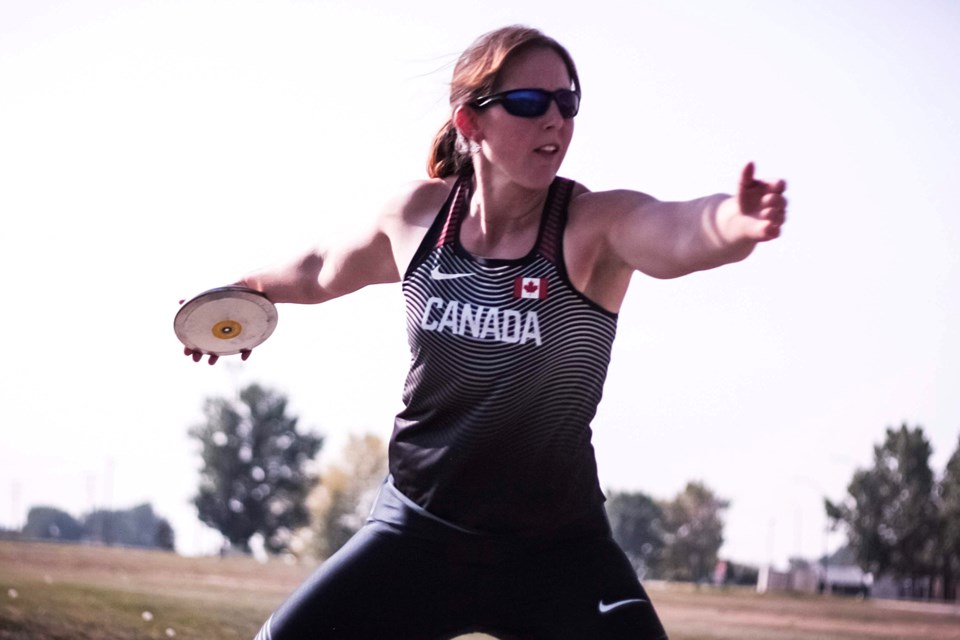 Olds discus thrower Rachel Andres is still hoping to qualify for the 2020 Olympics in Tokyo if they go ahead. But several qualifying meets have been cancelled due to the COVID-19 outbreak, so she's not sure what the future will bring. File photo/MVP Staff

OLDS — Local discus thrower Rachel Andres is still hoping to qualify for the 2020 Olympics in Tokyo — if they go ahead.

But qualifying meets have been cancelled due to the COVID-19 outbreak, so she’s not sure what the future will bring.

For now, the Olds resident is hoping the Canadian outdoor season, which normally starts in May, will proceed and thereby give her an opportunity to qualify, again, if the Olympics proceed.

“I am still currently ranked No. 32 in the world and everyone is in the same place we are right now,” she wrote in an email.

“I can still automatically qualify with a 63.50-metre throw, so that is going to be my goal if the Canadian season still happens and if the Olympics don’t get cancelled.”

Andres had been trying to make it via Olympic qualifiers in Australia.

Her latest opportunity was slated for March 20, but has now been cancelled.

The NCAA (National Collegiate Athletic Association) in the U.S. also cancelled all events through June “which absolutely sucks for the seniors,” Andres wrote.

“And it also eliminates any meet I was planning to travel to with NCAA affiliations.”

Right after Andres learned of the cancellation of the meet in Australia, she was told by Athletics Canada not to travel outside North America.

“Today they are telling all athletes abroad other than those in college to return to Canada. And they are all being strongly encouraged to do a two-week isolation before returning to normal life.”

Andres also said Athletics Alberta has emailed her, saying not club practices are to be held from now until April 6,.

Andres remained philosophical about the situation.

“It is wise to put people’s health above sporting events,” she wrote.

“Italy has shown how not to handle this in the beginning. And I think Canada has been wise to take more aggressive measures from the beginning to try to prevent a larger spread from occurring.”

Premier Kenney predicts 25 per cent unemployment in Alberta due to COVID-19
Apr 7, 2020 2:56 PM
Comments
We welcome your feedback and encourage you to share your thoughts on this story. We ask that you be respectful of others and their points of view, refrain from personal attacks and stay on topic. To learn about our commenting policies and how we moderate, please read our Community Guidelines.