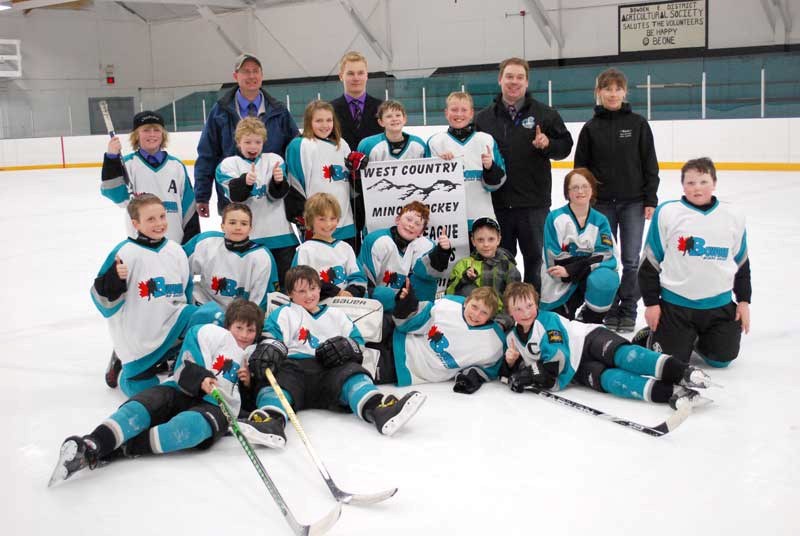 The Bowden Blades were set to host the 2020 Hockey Alberta Atom C provincials March 19-22 before Hockey Canada announced the cancellation of all activities. Sumbitted photo

The area’s minor hockey season – along with the rest of Canada’s – including planned provincials in Bowden and Sundre have been cancelled effective yesterday.

"We recognize the tremendous effort that has been put forth all year by individuals across the country as they participate in Canada’s game. Although it is difficult to process the hockey season ending abruptly, we feel this is the best course of action in order to do our part in keeping our country safe," reads a statement on behalf of Hockey Canada from Tom Renney, chief executive officer, and Scott Smith, president and chief operating officer.

Seven teams from across the province, including the host Bowden Blades, were to compete for the provincial atom C crown March 19-22 at the Igloo in Bowden.

In addition to the games themselves, lots of other activities were planned, including opening ceremonies, which were to take place on Friday, March 20 followed by fireworks.

A banquet was also planned that night at the Paterson Community Centre in Bowden.

Prior to the cancellation, organizing committee chair Travis Barry said about 500 people were expected to attend the tournament, including parents, grandparents, friends and of course the 130 to 150 kids who were expected to play in it.

About 450 were expected to attend the banquet.

The province has recommended restrictions on large gatherings of 250 individuals or more including conferences, sporting events and community events to try and limit the spread of COVID-19.

In an interview prior to the cancellation, Barry said the Blades were expected to do well in the championship.

Barry, who also serves as a coach of the Blades, said one of the the team's strengths is defensive play.

“We’ve got a couple of kids that thrive on defence, actually. That’s what they live for,” Barry said.  “One of my kids is actually that way.

“We’ve got a unique mix really, in the group where it seems the kids fill the roles that are necessary,” he added.

“They’re a little bit beyond their age as far as picking up roles kids their age wouldn’t be interested in dealing with, such as going to the front of the net and playing in the hard areas.”

Barry expected Bowden, Olds and Innisfail to all see an economic shot in the arm from the championship as attendees would have stayed in hotels and motels as well as bought meals and other items.

A core committee began working on a bid for the tournament about a year ago. Organizers received word it had been awarded to them back in December.

When interviewed prior to the cancellation, Barry said about 30 volunteers had been confirmed to work the weekend.

Barry was pleased with the way many hockey parents and others pitched in to ensure the tournament would have run smoothly.

Alberta sees dip in COVID-19 cases: Hinshaw
Aug 4, 2020 3:30 PM
Comments
We welcome your feedback and encourage you to share your thoughts. We ask that you be respectful of others and their points of view, refrain from personal attacks and stay on topic. To learn about our commenting policies and how we moderate, please read our Community Guidelines.