Student group helps out in Carstairs 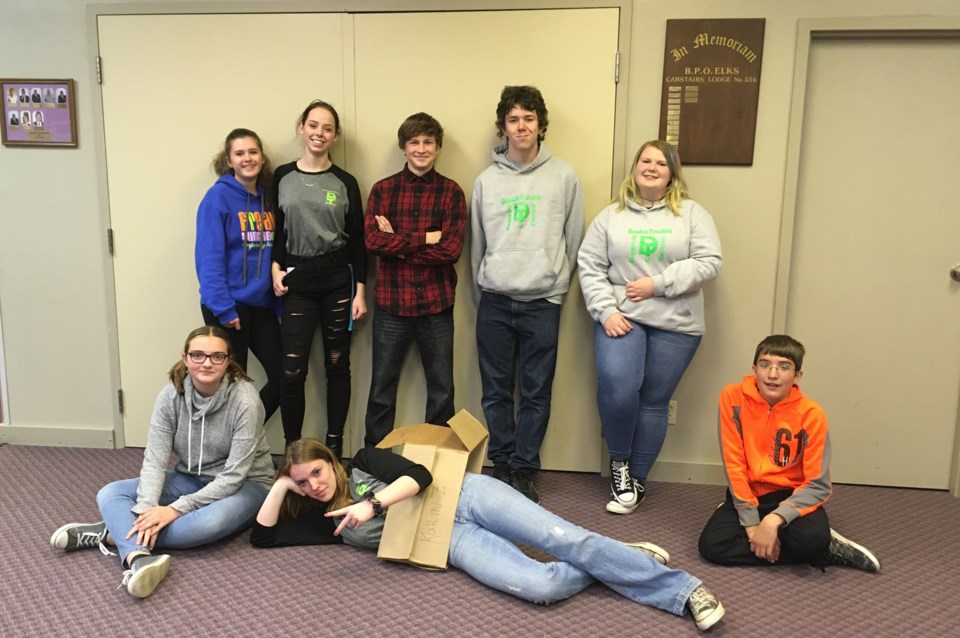 CARSTAIRS - A student group from Hugh Sutherland School in Carstairs is living up to its name, Double Trouble.

The group is part of SADD (Students Against Drinking and Driving), a nationwide organization that brings awareness to dangers around impaired driving. Beside providing awareness, Double Trouble also helps out in the community.

Eight members of the group recently helped with the Carstairs Bancroft United Church's annual fall supper. Karin Zebedee of the church said the kids were a great help.

"We serve over 400 people, generally, at the Carstairs Community Hall, and it is quite an undertaking," said Zebedee. "This year we decided to get some help. We hired eight kids from the Double Trouble group. They worked so hard and made everyone else's job so much easier."

Zebedee said the kids helped out by doing everything from bussing tables to cleaning up the hall afterwards to helping people to their cars on a cold and icy night.

"I can't say enough about these kids," she said. "They were an absolute pleasure to work with."

Janet Cornell, family school wellness worker-counsellor at Hugh Sutherland School started the group over a dozen years ago and still heads it up.

"Over 15 years ago three students came to me and asked if we could start a SADD chapter group," said Cornell. "I said absolutely. I know nothing about them but let's try this. How it started was that one of these students had lost a father to a drunk driver. He was riding his bike home from work in Calgary."

Cornell said they started with just three students that first year and are now up to about 25.

Cornell said she always has a very good, committed group of teenagers in the group who educate and provide prevention for the members of the community, families and fellow students.

"How we do that is we have guest speakers in," she said. "We always have MADD (Mothers Against Drunk Driving) in. They were here at the beginning of October."

The group also does various fundraising events in order to bring in other speakers throughout the school year.

"It's usually a mom or adult who has lost someone to drunk driving," she said. "They tell their story and tell how important it is. They then go on to educate and provide that prevention for kids."

"We're super excited," she said. "We're going to have a Christmas blitz before the holidays about being safe. We'll have the goggles available to anyone who wants to walk a line. It's very difficult. I don't like them because they make me dizzy. But it's very impactful on the kids."

Cornell said she's not surprised at all by the praise received by the group members from the community.

"My goodness, these kids just shine," she said. "They're so polite and helpful. The church has asked us to come back next year for the fall supper and help bus tables and clean up again. We wear our Double Trouble shirts. We're pretty serious and very successful. We also do cleanup for Carstairs Neighbourhood Party for a donation."