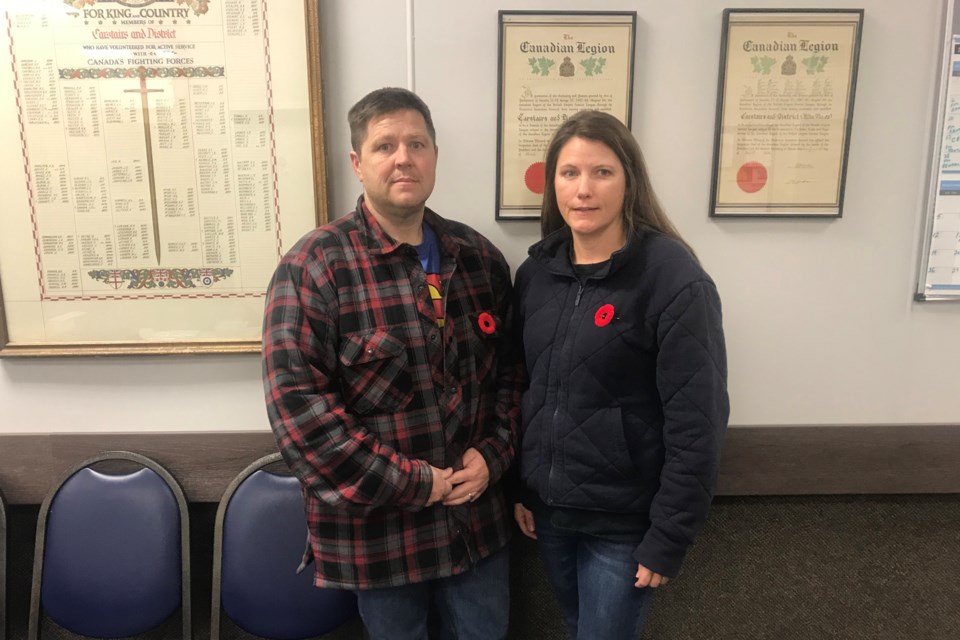 Shaune and Tamara Plumb at the Carstairs Legion. Shaune is the poppy campaign manager for the area, while wife Tamara is the membership drive chair. Photo submitted

CARSTAIRS - With Remembrance Day rapidly approaching, sales of poppies are going strong. Poppies are available throughout Mountain View County at many businesses by donation. The profits of the sales go to helping veterans in our area.

"All the funds that we collect in Carstairs and Didsbury stay in our area," said Norma Disney, past president of Carstairs Legion. "We are here to provide assistance to veterans and their families. We also foster the tradition of remembrance amongst our youth - the leaders of tomorrow such as cadets."

Disney said the legion provides residents with the opportunity to remember by providing them with a poppy and to participate in the various Remembrance Day services being held throughout the region.

"Businesses and citizens in both our towns are to be commended for their willingness to participate and their generosity when we are doing our Poppy Day campaign," she said.

Poppies are to be worn from the last Friday in October to Remembrance Day as a visual pledge to never forget those who sacrificed for our freedom.

Poppies would become a symbol of sacrifice made famous by the poem In Flanders Fields, which was written in 1915 by John McCrae. In 1921, the poppy became the official flower of remembrance by the Great War Veterans' Association of Canada (the predecessor of the legion).

This year's Carstairs Legion poppy campaign chair is Shaune Plumb. Shaune joined the legion in 2018 about a year after wife his Tamara Plumb.

"I decided to take a break and try something different," said Tamara. "I always knew about the legion and what it's all about, supporting veterans. I also had some friends and family who have served in the war and contributed elsewhere such as RCMP. So I thought what a great organization to help out with."

Shaune, who works as an EMS attendant in Didsbury and is a volunteer firefighter in Carstairs, joined shortly after his wife. He had several friends who served in the military. He also had family who had been legion members.

"My grandfather and grandmother were big legion supporters in Ontario," he said. "They loved the legion. I always wanted to join. Since my wife joined she said I should come out, so I did."

Both are heavily involved in legion activities with Shaune being on the executive and serving as the new poppy chair, and Tamara being membership chair.

"We have about 190 members in good standing," said Tamara. "We have regular general meetings and there are executive meetings once a month. We meet and talk about upkeep and legion activities and how we're going to support the veterans."

The branch is generally open from Thursday to Saturday. They also have various events such as dart nights on Fridays, bingos on Thursdays and meat draws.

Shaune took over as poppy chair from Bob Disney, who had filled the position for many years.

"This year I think he just wanted to step down from it," said Shaune. "He's actually doing a lot helping train me to do it. He's helping with how to get the poppies out, who gets them, the collection of them."

"On October 25 the Governor General gets presented their poppy and then poppies can go out to the general public," he said. "We distribute them to all kinds of businesses in Didsbury and Carstairs."

Both are really enjoying being part of the legion and giving back.

"So far I think it's good," said Shaune. "I'm hoping we're making a difference by supporting the vets by making sure there are available funds and there is a place for vets to go if they want to."

"It's a great little place to go and be part of a community," said Tamara. "We network and support each other and support the community."

Tamara recently convinced her parents to join the Carstairs Legion.

"So now my mom is part of the executive committee as the secretary," she said.

Carstairs Heritage Festival asks town for funding
Feb 14, 2020 6:25 AM
Comments
We welcome your feedback and encourage you to share your thoughts on this story. We ask that you be respectful of others and their points of view, refrain from personal attacks and stay on topic. To learn about our commenting policies and how we moderate, please read our Community Guidelines.