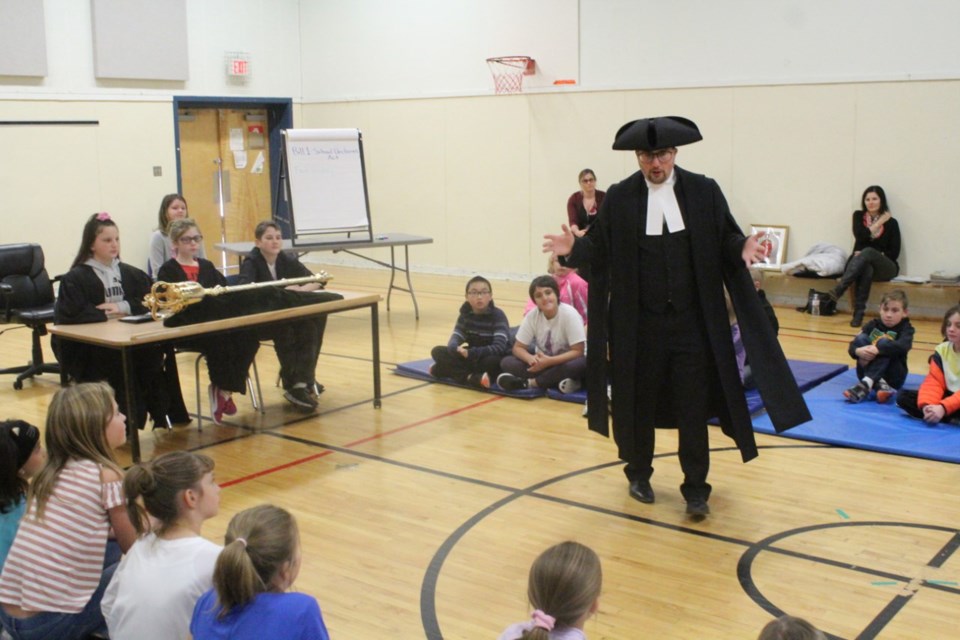 CARSTAIRS - Grade 6 students at Hugh Sutherland School in Carstairs got an up close look at Alberta's democracy in action on Nov. 13 when Nathan Cooper, the Speaker of the legislative assembly of Alberta, brought the Speaker's Outreach program to the school.

The students got to participate in a mock legislature complete with uniforms, speaker Cooper and Sgt. at Arms Tom Bell, who brought in the mace, which is a large scepter used to call legislative sessions to order.

Under Cooper's direction, the students took sides of the legislature and worked their way through a mock bill.

Cooper, who is the MLA for Olds-Didsbury-Three Hills and a former Carstairs town councillor, said the tour wasn't just about educating but also showing appreciation.

Cooper told the Gazette this was the second ever outreach tour where they take the actual mace that typically starts a legislative session in Edmonton out to schools and community organizations in rural Alberta.

"Today was only the fifth time in Alberta's history that the mace has been outside of the legislature," said Cooper. "We had a great opportunity to take it to a couple of schools here in the constituency. One of the jobs of speaker that I take so seriously is the role of trying to help educate Albertans, whether it be young Albertans or older Albertans, on the importance of our democracy, our freedoms, and the strengths of our institutions."

"Every time I have a chance to interact with young Albertans I'm excited about the future of our province - so many great questions, so engaged in the process, and really just excited to be able to see the mace and be part of it," he said.

"I often use a hockey analogy for them so they can understand the significance of the mace. I say the mace is the government equivalent of the Stanley Cup. It's really the Stanley Cup of democracy, only nerdier. It was a lot of fun."