The development will basically fill up all the available space for development along the service road on the west side of Highway 2
May 17, 2021 12:00 PM By: Doug Collie 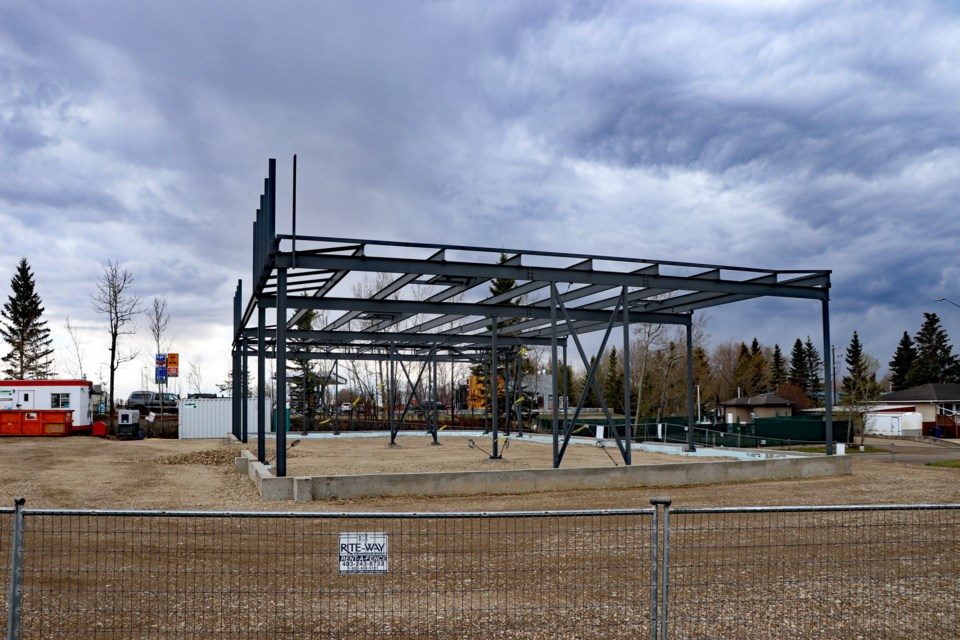 Steel framing is already up for the Tim Hortons restaurant, gas station and convenience store, being constructed in Bowden, along Highway 2. Johnnie Bachusky/MVP Staff

BOWDEN — Mayor Robb Stuart is pleased to see how quickly the new Tim Hortons facility is being constructed in town.

He says when it’s finished, as far as he knows, the development will basically fill up all the available space for development along the service road on the west side of Highway 2.

He hopes that will now spur developers to create projects on town land along the east side of the highway.

“I don’t think there’s room there now," he said during an interview. “They could buy land to the north of the road if they were desperate, I guess. Everything along there is all taken there now, pretty well.

“They can go east – we'd love people to go on the east side the highway.”

Construction of the Tim Hortons began at least a month ago. Already, steel framing is up.

The $1.9 million 5,226-foot project, located on the site of a recently demolished motel, also includes a Shell gas station and convenience store and is expected to be completed this fall.

“They’ve been going non-stop,” Stuart said during an interview.

“I don’t know when they’re going to have it open, but man, I couldn’t believe they got going as early as they did and they just keep working.”

Stuart was told with a couple of restaurants and gas stations, the service road now looks like a mini Gasoline Alley.

Stuart said that’s not necessarily a town plan, but he’s hopeful development there will forestall an earlier plan by Alberta Highways to scrap the service road as part of a redevelopment of the highway.

“That was the whole thing, that they couldn’t guarantee us they’d keep the ramp there open and it’s still in their 10-year plan not to have it (open). But I’m pretty sure if the businesses go in there (they’ll keep it open),” he said.

“Then again, the province has so many money issues that putting any money into that when there are so many other important projects that need to be done is my thought on it, but I’ve been wrong before.”