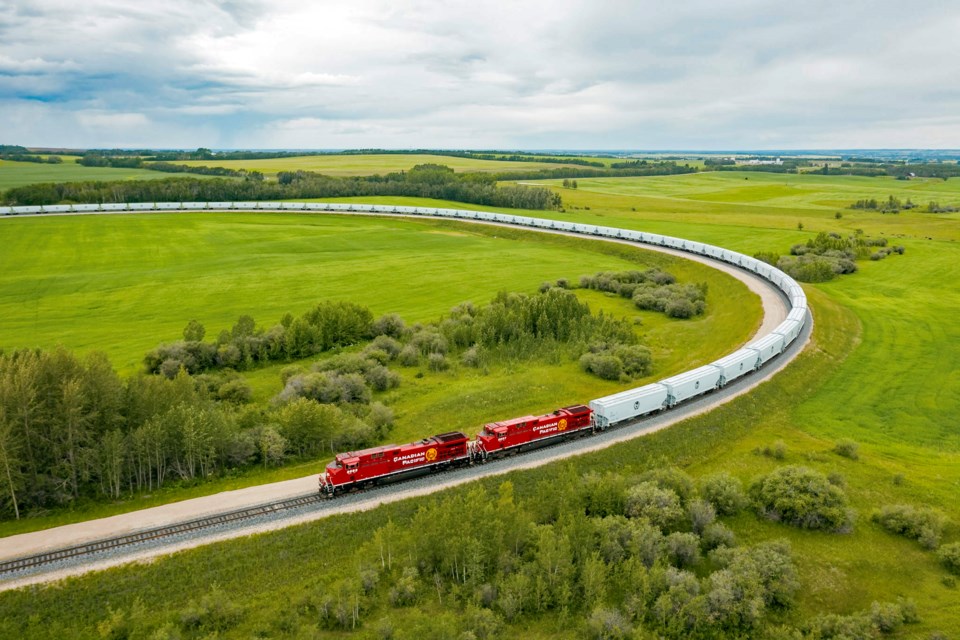 Paterson Grain and CP Rail teamed up to have a successful journey of the largest ever grain train, from Bowden to Vancouver. Photo courtesy of Paterson Grain

BOWDEN – The largest-ever grain train that began a 1,065-kilometre journey at Paterson Grain’s new Foothills Terminal near Bowden was such a resounding success an encore trip could originate from the local facility this summer.

The record-breaking shipment travelled all the way to Vancouver’s Alliance Grain Terminal on the Canadian Pacific Railway (CP Rail) network. The train, powered by four locomotives, was loaded in less than 14 hours with 16,313 metric tonnes of grain in 167 new high-capacity hopper cars.

With each car and locomotive measuring about 15 to 18 metres (50 to 60 feet) in length, the super-sized train measured “roughly” two miles, or well over three kilometres long.

Shane Paterson, the grain company’s director of trading and transportation, also acknowledged that grain-handling history was made when CP left its Bowden facility on April 25 and arrived at the West Coast port four days later. He added that the success of the record-breaking journey will lead to others in the near future.

“And now that they (CP) know they can do it, I think when the stars align and demands from other industries are allowing for it, they will do more of these in the future,” said Paterson, adding the next one could occur this summer.

“There was a fair bit of planning that went into this, and I think we may see more of them. I wouldn’t say I believe there will be a consistent service offering for CP moving forward, but when opportunities allow I think they’ve proven they can do it. It is quite an efficient model.”

“We are seeing more and more of the 134- and 147-car trains. I think their operating plan is to do that on a consistent basis, month over month, year over year moving forward,” he said, noting the April super-sized train had an extra 20 cars.

“I think it is a function of reduced railway demand from other sectors, but grain continues to be strong and I think it has created the opportunity for CP to see what they could do, and we are very pleased to be part of that test run.”

“We are thrilled to be part of the community there. It has been a really great experience, a very welcoming group, and the business has been good,” said Paterson, whose company name is now on the town’s new state-of-the-art Paterson Community Centre.

“There have obviously been some challenging years for Canadian agriculture with everything going on with China, trade wars and everything else. But in terms of the customer base there, the business prospects are all vey positive and exceeding expectations and we couldn’t be more pleased.”

Paterson noted the facility — which can store a little more than 2.2 million bushels of grain, is able to ship 75,000 bushels per hour and clean 8,800 bushels per hour — was built with a future expansion plan that could see its size double.

“I don’t think we ever expected that to happen a couple of years after we built the facility,” he said. “But I think in due course that facility will be expanded to meet the needs of the local producers.”

New welcome signs coming to Bowden
Aug 26, 2020 9:00 AM
Comments
We welcome your feedback and encourage you to share your thoughts. We ask that you be respectful of others and their points of view, refrain from personal attacks and stay on topic. To learn about our commenting policies and how we moderate, please read our Community Guidelines.