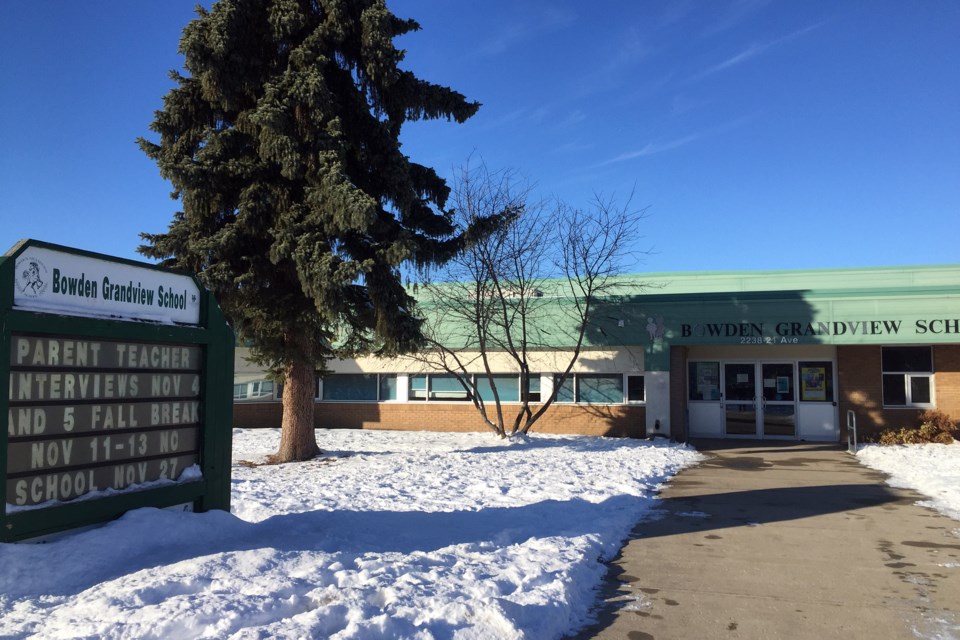 Chinook's Edge School Division officials ordered 184 students and three staff members from Bowden Grandview School to be sent home Friday (Nov. 20) to self-isolate until Dec. 2. The order was made following the second confirmed COVID-19 case at the school in a month. Johnnie Bachusky/MVP Staff

BOWDEN – Hundreds of public school students and staff have been sent home to self-isolate in Central Alberta after schools in three communities were made aware of positive COVID-19 cases during the pandemic’s current second wave sweep through the region.

"We have one positive case in that school community and every time we have a positive case we err on the side of caution and do some tracing as to who that individual would have been connected with, and unfortunately in this situation there was a larger number than normal," said Sacher.

The confirmed COVID case at the Bowden school was the second in a month. Last month on Oct. 19, the school division confirmed a positive case at the school. Sacher said 23 students and three staff members were sent home to self-isolate for four days. He said the two Bowden cases were “completely unconnected” to each other.

Sacher said it was his understanding the current condition of Bowden’s positive-case individual is that he or she is not symptomatic.

It’s not known whether any of the three schools’ positive COVID cases are students or staff. Sacher said that information is not released by the school board as it wants to protect the identities of all impacted people.

While the mass self-isolation strategy to thwart the spread of COVID is new for the Chinook’s Edge School Division, Sacher said it’s “not that abnormal” a strategy in other jurisdictions, particularly in those that now have an enhanced pandemic status.

“If you take a look at Red Deer there are hundreds of kids being self-isolated on a regular basis with some of their larger schools there,” he said, adding the Nov. 20 case in Bowden is the largest self-isolation order his division has had to make.

Sacher also warned that the recent disruptions in the schools caused by new COVID cases and subsequent self-isolation orders will not be the last, as the soaring rates of COVID cases across the province and the region continue its destructive and disruptive second wave march.

“Because the numbers are increasing around us, it is going to cause the school numbers to go up and there will be more disruptions as we move towards the Christmas break,” said Sacher. “With trends we are seeing across the province we would predict that parents can expect more disruptions rather than less until the numbers turn around.

“When the provincial numbers start going down and the chief medical officer starts feeling better about how everyone is doing in their homes and in their communities then you are probably going to see school disruptions go down significantly,” he added. “The two are very closely correlated.”

In the meantime, Sacher said learning will continue for the displaced self-isolated students. He noted October’s disruption in Bowden displaced many students but staff rallied to the challenge and did an “amazing job” to ensure learning continued.

“Certainly, it is not ideal but the staff will do what it can to see that learning moves forward, and we know they are well prepared for that,” said Sacher, who also recognized the increased challenges for the community and parents. “We know this puts (public and parents) in a challenging position when students are staying home but it is for everyone’s safety that we are compelled to do that.”

According to provincial statistics as of end of day Nov. 19, there were five active cases in the Innisfail local geographic area which includes Bowden and south Red Deer County. The area has had 19 cases total with 14 listed as recovered. No COVID-19-related deaths have occurred in the area, according to the available data.

The Didsbury local geographical area which includes the town, Carstairs, Cremona and south Mountain View County had 11 active cases as of Nov. 19. The area has had 47 cases total with 36 listed as recovered. No deaths have occurred in the area, according to the available data.

As of Nov. 19, there were no active cases in the Sundre local geographic area which includes the town and west Mountain View County. There have been five cases in total and five listed as recovered.

As of the end of day on Nov. 19, the province listed nine active cases in the Olds local geographic area which includes west Mountain View County and parts of Kneehill County including Torrington. Seventeen cases out of a total of 26 are listed as recovered.

Sylvan Lake has had 36 cases with 10 listed by the province as active and 26 listed as recovered.