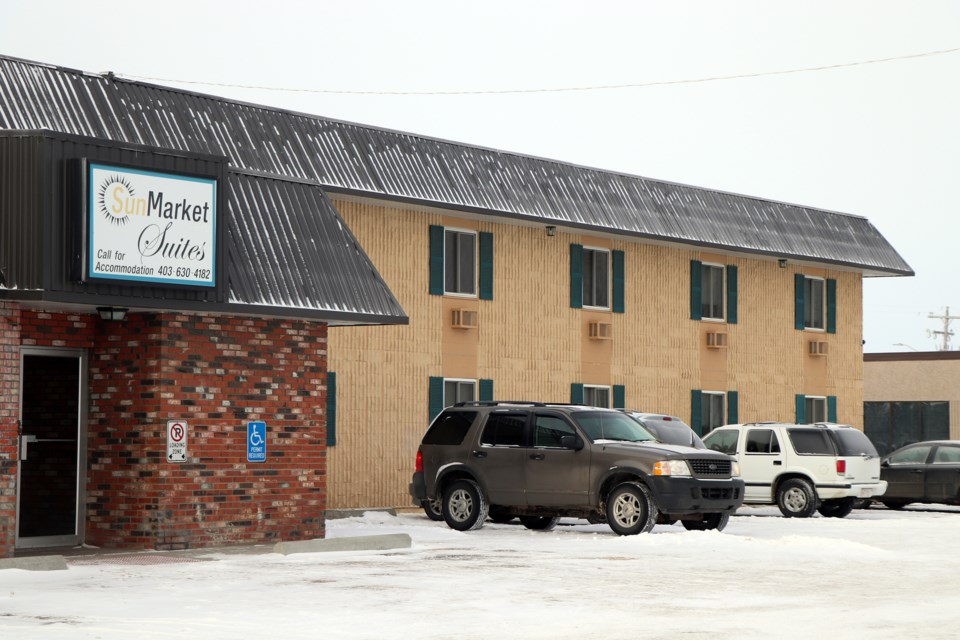 The main entrance to Bowden's Sun Market Suites, a 42-unit affordable housing facility that has about a five per cent vacancy rate in winter months and zero during the summer. Johnnie Bachusky/MVP Staff

BOWDEN – Suddenly the Town of Bowden is a tough place to find a spot to hang your hat.

A recently released 2018 Apartment Vacancy and Rental Cost Survey, conducted by the province with statistics from 66 rural communities with populations between 1,000 and 9,999, revealed Bowden has the greatest “absolute” reduction in vacancy rate, from 29 per cent in 2017 to 6.5 per cent in 2018. The rates were based on 31 local rental units identified for the survey. In 2017, there were nine vacancies out of the 31 and two from the same total in 2018.

The 154-page survey was presented to Innisfail town council on Jan. 6. at its first Agenda & Priorities Meeting of 2020. It showed that the overall provincial vacancy rate increased in 2018 to 13.3 per cent, up from 11.7 per cent in 2017. The 2018 survey showed an increased vacancy rate in 29 communities, a decrease in 31 and no change in six.

“We are doing a little better than other communities, maybe not doing great but other communities might be suffering more than us,” noted Innisfail councillor Doug Bos last week. In Olds, the vacancy rate dropped to five per cent in 2018, from 6.1 per cent the year before.

“Penhold has a small rental market so assuming the numbers are accurate it wouldn't take much to shift from 11 to 26 per cent. That could easily be less than 11 per cent next year. Without getting more detailed information it doesn't really tell us much,” said Penhold mayor Mike Yargeau.  “I would say based on what I see in the community when Penhold has residential rental units available they seem to be filled quite quickly.”

In the meantime, the survey’s findings for Bowden were met with a declaration of “great news” from Mayor Robb Stuart, who added it was another piece to the growing evidence of increased development interest in the town of 1,240 citizens.

“Our Municipal Planning Commission met more times last year than in the past five years, and that is just to deal with development requests,” said Stuart. “I am hoping this coming year will be even better.”

Last year the town witnessed strong interest to redevelop two old and unused institutions but both were unsuccessful at the application stages.

There was a plan to redevelop the old Bowden Hotel to create several small one-bedroom affordable apartments but that initiative could not move forward due to ongoing legal issues involving liens on the property held by the Canada Revenue Agency.

There was also a redevelopment plan for the old Bowden Lions Hall to create 26 apartment units but the Municipal Planning Commission turned down a development permit application last year.

Stuart said the town has in recent years been more proactive in trying to attract new residents but had no available apartment buildings or other types of rental units to accommodate them.

“One burned down and got (rebuilt) into duplexes. We have only one apartment block but that hasn’t changed and that shouldn’t really affect the numbers. I imagine there is zero capacity for renting an apartment or even a basement suite,” he said, wondering if the current low vacancy numbers are due to the difficulty of finding accommodations in Olds where large cannabis growing operations have attracted huge numbers of new employees.

In the meantime, vacancies are currently low at two of Bowden’s main rental institutions, including a pair of services for seniors that total 30 units, and another private facility with 42 units, the latter suggesting they could have been missed by the survey.

Westview Manor, which is a 20-unit independent living seniors' facility, had one vacancy in 2018, while Bow-Glen Court, which has 10 self-contained suites, had no vacancies in 2018.

It’s a similar vacancy rate story a few blocks away at Sun Market Suites, a former motel that transformed in 2016 into a 42-unit affordable housing building. Building owner Kyle McCowan said the vacancy rate is “usually” zero during the summer months and at about five per cent during winter.

“I don’t think we have ever been more than five per cent,” he said.

McCowan said about 60 per cent of his building’s clients are single and 40 years old and older, with a majority of them working, and others either retired or receiving medical assistance. He said another 30 per cent are in the 25- to 40-year range, while the remainder is under 25 years old.

“Bowden in many ways, has been or always has been, somewhat a bedroom community for Innisfail and Olds,” said McCowan, adding a few of his residents may be working in the Olds cannabis grow operations. “If they are working they are probably not working in Bowden.”

Mayor expects few changes as town reopens
May 15, 2020 8:00 AM
Comments
We welcome your feedback and encourage you to share your thoughts. We ask that you be respectful of others and their points of view, refrain from personal attacks and stay on topic. To learn about our commenting policies and how we moderate, please read our Community Guidelines.