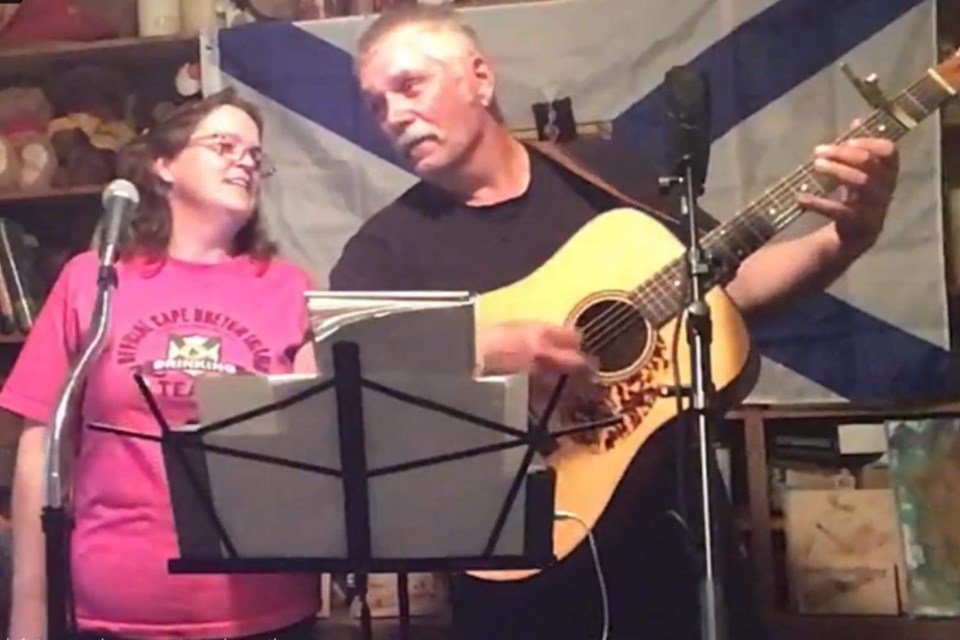 BOWDEN — Local musician Charlie Brittain says he and his wife Janice are amazed at the response they’ve received from area residents after they were feted by town officials.

Earlier this spring, the couple, who frequently volunteer to help others, received a certificate of thanks from the town for all they do. They volunteer at church and for the Bowden Daze rodeo among other things.

They were also honoured for their participation in the nation-wide Ultimate Online Nova Scotia Kitchen Party, during which they play music primarily with an old time, gospel and East Coast feel for folks.

“We’ve had messages from people from town, from Didsbury, Olds, Red Deer, who heard it, who know us as just ordinary people. But they didn’t know that we got the award and they all say it’s well deserved because of what we do,” Charlie said during an interview.

For example, he said they performed at various functions and helped out during Canada Day celebrations.

Charlie stressed he and Janice have never done this or their volunteerism for any kind of recognition.

"You just live in town and you do what you need to do to make the town better. You help people and you volunteer and that,” he said. “But to get recognized like that was pretty amazing. I wasn’t expecting that at all.

“I know probably half the town here and if somebody needs a hand, you help them. If somebody’s volunteering, there’s something going on, you volunteer, you help. And that’s what you do.

“When you’re raised that way, you help people, because you never know when it might be you.”

Charlie is humbled by the award but says he and Janice aren’t the only Bowden residents who volunteer and do good works in town.

“Every year there should be a nomination or somebody getting a volunteer of the year award from town because there are a lot of people who do a lot of things that don’t get recognized, and they should,” he said.

“There’s a gal who lives just three or four houses down from here and she does income tax for seniors for free; just does it because they need it.

“And it’s people like that make living in a little town worth living in. They don’t want anything back; they’re just helping out.”

“Actually we discussed that at our last council meeting and made a motion to direct administration into coming up with some kind of a plan where residents can be recognized for whatever we think,” he said.

Stuart said that sort of thing used to be done years ago. Residents who had the most attractive properties were recognized. A Volunteer of the Year award was also handed out.

However, he said presenters encountered “pushback” from some people who thought they should have received that award instead.

At least 270,000 people are members of the Ultimate Online Nova Scotia Kitchen Party, according to Charlie.

Proponents say those performances have been key to lifting the spirits of people who have been isolated during the COVID-19 pandemic.

Lorne Foster, a good friend of Charlie’s, says the couple are great musicians.

“He’s wonderful guitar player, mandolin player, bass player; can wing it on fiddle or piano,” Foster wrote in an email, adding Charlie knows the lyrics to possibly 200 or more songs.

During one of those tours, while in Bowden, he met Janice, who was also originally from the East. They married and settled back in Bowden again in the late ‘80s.

The Brittains began playing in the Ultimate Online Nova Scotia Kitchen Party after learning of its existence in March of 2020.

They both love participating in it.

They take requests and love to play live, as opposed to others who record and then upload their music.

“You don’t know these people really,” he said. “But you see them every show you’re playing. They come in every show. So now we’re getting to know probably half the audience we have.

“We know where they live and how long they’ve been married, how many grandkids they’ve got and what he does for work and all this. It's amazing.”

It’s also led to an opportunity to sell CDs of their music to fans across the country, although Charlie and Kitchen Party organizers stress that’s not the idea behind the show.

“We’ve shipped, I bet you a thousand CDS back East; at least that many,” Charlie said.

Charlie has worked at a feed lot east of Bowden for 31 years.

He’d love to play music full-time but says “there’s not enough money in the music to make it work.”

He tried in 1999, putting together a band called Country Gold, with bandmates from around Mountain View County and central Alberta.

“We played together for 11, 12 years, just doing dances and weddings and rodeos and legions. We were busy; we were busy, busy. But one of the guys got married, had kids and the other guy moved on,” he said.

One way or another, Charlie and Janice plan to continue making music for as long as they can “because people like to sit and watch live music. We like playing and that’s the only way to do it – play.