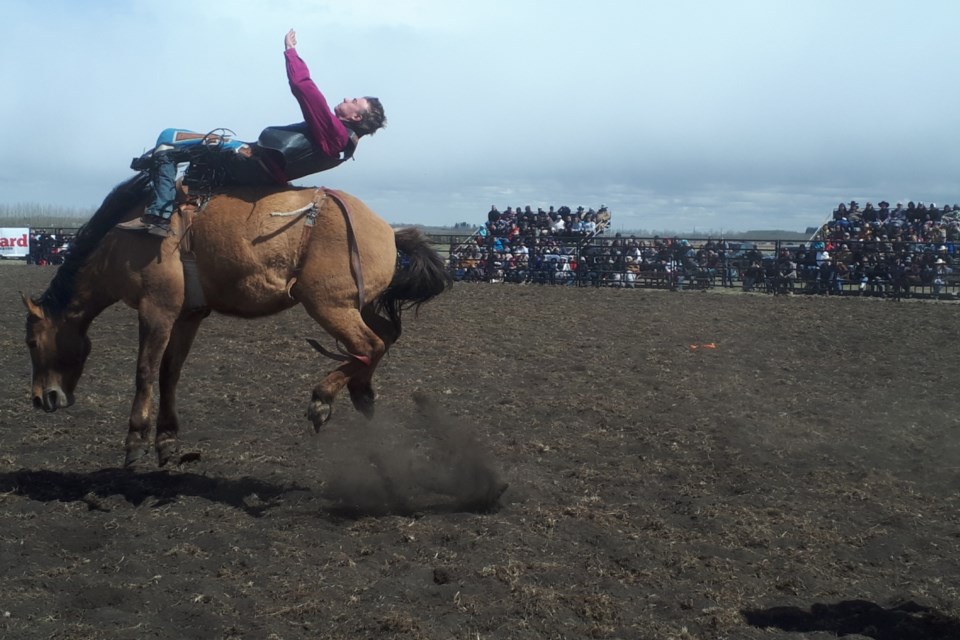 BOWDEN — Alberta Health Services (AHS) has been granted an injunction by Court of Queen’s Bench to prevent organizers from holding a second rodeo this weekend to protest COVID-19 pandemic restrictions.

In response, organizers Ty and Gail Northcott said late Friday via the Northcott Rodeo Inc. Facebook, that the event has been “postponed.”

The event, planned for June 5 and 6 near Bowden was named the "No More Jason Kenney Pro Rodeo Rally.”

Advertising for it promoted rodeo activities that would occur throughout the weekend. Attendees would have to buy tickets. The rodeo, like the first one held by the Northcotts in May, was not exempted by Alberta Health Services (AHS).

The first one, called the No More Lockdowns Rodeo Rally was held on private property May 1-2 just south of Bowden and attracted hundreds, if not thousands of rodeo fans and political sympathizers.

A lawyer for the Northcotts had argued the June 5-6 event was a political rally, not a rodeo and thus should be allowed to proceed, but that argument was not upheld.

The injunction granted by Associate Chief Justice John Rooke June 4, applies to the organizers, as well as any attendees present at any events put on by the organizers.

It prevents the organizers from holding any future events that don’t follow all the requirements of health orders issued by Chief Medical Officer of Health (CMOH) Deena Hinshaw.

That includes wearing masks, limiting attendance at functions, undertaking physical distancing, and complying with any rules that may be required for sports competitions or other spectator events.

An AHS news release says the injunction includes provisions to have it enforced by police and “imposes significant consequences on the organizers or attendees of this event and deters others from organizing similar events in the future.”

“AHS has taken this step due to the ongoing risk to Albertans created by those breaching COVID-19 public health restrictions and advertising social gatherings which, if held, breach current and active CMOH orders and pose a risk to public health,” the release says.

“Previous enforcement efforts against the organizers, as well as attempts to proactively work with them to not proceed with the event have been exhausted by AHS and law enforcement partners.

“It is extremely disappointing that people would knowingly put their fellow Albertans at risk by ignoring the current rules.”

“AHS strongly encourages Albertans to continue to follow all CMOH restrictions,” it adds.

This latest injunction follows a pre-emptive one granted on May 6 against anyone who promotes, organizes, and/or attends an illegal public gathering that doesn’t comply with COVID-19 public health orders.

Later on Friday, the Northcotts issued a statement regarding the latest injunction on Facebook.

They said the June 5-6 event has been postponed.

They said their May 1-2 one attracted about 3,000 spectators. Certainly it attracted hundreds, if not thousands.

The Northcotts described COVID-19 restrictions, which have been in effect for about 15 months as “oppressive” and claimed they violate "Albertans’ Charter freedoms.”

”We want to be clear that we are not postponing this by our choice,” Ty Northcott said in the post.

“This is what AHS and Justice Rooke have forced us into. Never would we have dreamed that in a free country, it would be illegal to do a rodeo rally.”

“Maybe Premier Kenney doesn’t like the name of our event, the No More Jason Kenney Pro Rodeo Rally,” the post said.

After the May 1-2 rodeo rally, the Northcotts were charged with violating the Public Health Act.

They pleaded not guilty. That case is due back in court on June 21.