Trudeau hands out advice on Halloween, saying 'sacrifice' necessary for many

Dr. Deena Hinshaw, Alberta's chief medical officer, said a surge in COVID-19 cases and hospitalizations has not changed her view that trick-or-treating is low risk.
Oct 22, 2020 2:30 PM By: Canadian Press 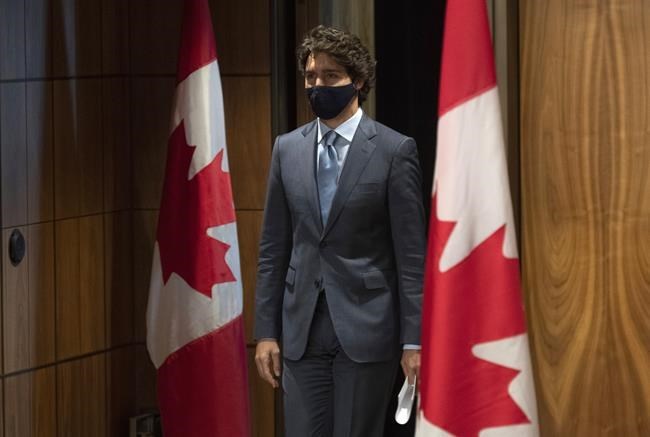 Prime Minister Justin Trudeau arrives for a news conference Tuesday Oct. 20, 2020 in Ottawa. Trudeau is urging Canadians to adhere to local health guidelines when considering how to celebrate Halloween next week, acknowleding that not trick-or-treating will be hard on many kids. THE CANADIAN PRESS/Adrian Wyld

OTTAWA — Prime Minister Justin Trudeau is urging Canadians to stick to local health guidelines when considering how to celebrate Halloween next week.

The question of how to handle the spooky evening is top of mind for many parents who are trying to assess the patchwork of regional health advice, guidance and stern warnings about trick-or-treating.

Health authorities in Ontario have advised against it in the hot spots of Toronto, Peel Region, York Region and Ottawa, despite the fact that Canada's top doctor has deemed it a safe activity in most places if health protocols are followed.

Quebec Premier François Legault has said trick-or-treating can go ahead in Canada's viral epicentre so long as participants wear face masks and head out with family rather than friends.

Dr. Deena Hinshaw, Alberta's chief medical officer, said a surge in COVID-19 cases and hospitalizations has not changed her view that trick-or-treating is low risk.

"All the other activities that might happen indoors — I would recommend those not happen," she said. "But there are ways to make trick-or-treating safe and I still believe that we can go ahead with Halloween even though we are seeing some increased numbers."

"We know that it’s not easy, and it’s frustrating," he said Tuesday. "Unfortunately all of us are having to make sacrifices of different types, particularly kids."

The Trudeau family lives in Ottawa, which is a part of Ontario with renewed restrictions on public activities, so the prime minister said his children are staying home.

"Listening to public health officials means that my family will not be going trick-or-treating this year, because in Ottawa, and in Ontario in red zones like Ottawa, they are not encouraging or not recommending trick-or-treating, and therefore we won’t be," he said.

"A friend of mine suggested that maybe we could do an Easter-style treasure hunt for candy throughout the house and yard, and that’s something that we’re also reflecting on," Trudeau said.

The country's top physician encouraged Canadians to be wary of misinformation on social media, which has sometimes "spread faster than the virus itself."

“As each part of the country is experiencing the pandemic differently, people may be facing uncertainty about what action is needed to keep ourselves and our loved ones safe," she added.

"What is certain is that our response requires a collective effort. Everyone’s actions matter."

As case counts rise in parts of the country, 52 per cent of parents say they will not let their children go trick-or-treating this year, according to a recent online survey conducted by Leger and the Association for Canadian Studies.

Dr. Isaac Bogoch, an infectious disease specialist and researcher at Toronto General Hospital, agreed that Canadians should listen to local health units — though that can be more complicated than it sounds.

"It can be challenging when you don’t have consistency from the various public health authorities," he said.

In areas with lower infection rates, candy-pedlars with concerns about physical distancing should consider adapting their doorway routines.

"We’ve seen creative approaches where people have set up those little tubes, little chutes, for candy to go down into bags," Bogoch said. Other options include using barbecue tongs or — for the more trusting — leaving treats on the doorstep.

Face masks, hand sanitizer and physical distancing remain the key precautions for trick-or-treaters and their benefactors, he said.

Kids aren't the only ones who have to stay vigilant. Top defence officials have ordered Canadian troops to keep up their guard against COVID-19 while painting a gloomy picture of how the pandemic could affect the military and country.

The order is in a new directive to Canadian military personnel and Defence Department officials from chief of defence staff Gen. Jonathan Vance and Jody Thomas, deputy minister of defence.

The two say complacency about physical distancing, mask-wearing and other public health measures are the greatest threat to the military when it comes to COVID-19.

The sharp acceleration of new cases amid Canada's second wave has continued, with the government reporting 3,289, according to numbers compiled Monday evening.

The coronavirus death toll has also kept up its grim march over the last few days, nearing 10,000 as severe illness caused by the pandemic increases, Tam said.

The total number of deaths reached 9,778 on Monday. The past seven days saw an average of 950 patients in hospital daily including nearly 200 in critical care, resulting in 22 deaths per day on average, she said.

Quebec and Ontario continue to drive the surge in new cases, reporting 877 and 821 respectively on Tuesday.

Quebec reported 12 more deaths attributed to the virus, and Ontario reported three, with both provinces reporting upticks in hospitalizations and intensive-care patients.

Alberta reported 323 new daily cases on Tuesday and one additional death. In Calgary, 49 COVID-19 cases have been linked to a recent wedding celebration that 63 people attended.

This report by The Canadian Press was first published Oct. 20, 2020.

Canadian labour leader hopes Biden’s efforts pressure Canada on climate, jobs
Nov 29, 2020 12:15 PM
Comments
We welcome your feedback and encourage you to share your thoughts. We ask that you be respectful of others and their points of view, refrain from personal attacks and stay on topic. To learn about our commenting policies and how we moderate, please read our Community Guidelines.