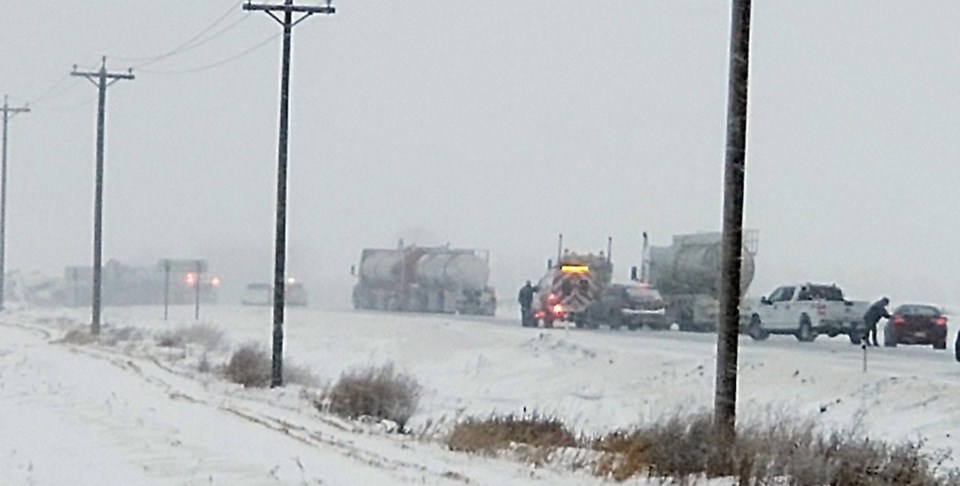 Three Fort McMurray residents are dead after a three-vehicle accident on Highway 55, east of Grassland, between Township Road 674 and Range Road 190 Feb. 11.

Boyle RCMP responded to the scene of the three-vehicle collision at 10:37 a.m., two kilometres west of Grassland between Township Road 674 and Range Road 190.

A Feb. 12 press release from RCMP said a preliminary investigation revealed the southbound car was attempting to pass another vehicle when it collided with a semi-tractor heading northbound. A separate collision then occurred with a southbound semi-tractor.

Three of the car’s occupants were pronounced dead at the scene, while an additional passenger of the car, which has since been identified as a taxi, along with the driver of the northbound semi were taken to a local hospital and then airlifted to Edmonton with serious life-threatening injuries. The driver of the southbound semi suffered only minor injuries.

RCMP said speed and road conditions are believed to have been factors with icy conditions, low visibility and heavy snow having been reported at the time of the collision.

Boyle RCMP and an RCMP collision analyst continue to investigate.

No charges are being laid, and the names of the deceased are not being released.

Traffic was still being diverted around the scene of the collision at 11:14 a.m. Feb. 12. Officers anticipate the diversion will last approximately two more hours.

Motorists are asked to slow down around emergency vehicles and drive with conditions in mind as heavy blowing snow, low visibility and icy conditions are currently being reported in the area.

Walking a mile in a ribbon skirt
Sep 28, 2020 6:15 PM
Comments
We welcome your feedback and encourage you to share your thoughts. We ask that you be respectful of others and their points of view, refrain from personal attacks and stay on topic. To learn about our commenting policies and how we moderate, please read our Community Guidelines.