The latest developments on COVID-19 in Canada on April 5 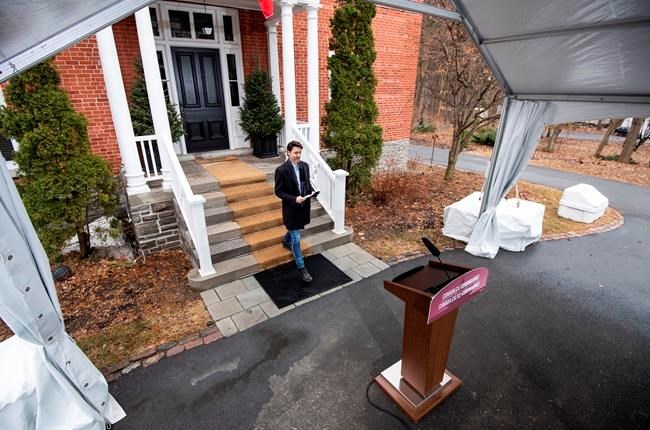 Prime Minister Justin Trudeau arrives for his daily press conference on the COVID-19 pandemic outside of his residence at Rideau Cottage in Ottawa, on Sunday, April 5, 2020. THE CANADIAN PRESS/Justin Tang

The latest news on the COVID-19 global pandemic (all times Eastern):

Three more COVID-19 patients have died in Alberta, bringing the death toll in that province to 23.

The newly reported deaths involve a man in his 60s in the Calgary area, a woman in central Alberta who was in her 80s and a man who was over 100 years old in the province's north zone.

The Alberta government said Sunday that there have been 919 lab-confirmed COVID-19 cases in Alberta, as well as 331 presumptive cases.

The province says the presumptive cases include people who show symptoms of COVID-19 and are close contacts of laboratory confirmed cases, but did not explain why the number of cases described as "lab-confirmed" dropped from yesterday's total.

The Queen has issued a message directly to Canadians, hours after delivering a public speech to the British people and members of the Commonwealth.

The monarch says she understands Canadians may be struggling to remain hopeful "when faced with loss and uncertainty, but Canadians have many reasons for optimism, even in the most trying times."

The Queen says Canadians must come together in this time, and that her thoughts and prayers are with citizens of this country.

Some passengers have begun disembarking the Coral Princess cruise ship in Florida, but Canadians are not among them.

Only those travelling to the U.K., Australia and California on chartered flights are being allowed off.

Passenger Sanford Osler of North Vancouver says the cruise line has promised to charter a plane for the 97 Canadian passengers, but no timeline has been laid out.

A news release from the province says that while there is no evidence domestic livestock and pets can be infected with or transmit COVID-19, it says the possibility has not been ruled out.

It says if there is already an animal in the household, that animal should remain in isolation along with the patient.

According to the Canadian Veterinary Medical Association website, some animals have become infected with through close contact with infected humans, but there is no evidence to suggest that animals infected by humans are playing a role in the spread of COVID-19.

Queen Elizabeth II addressed Britain, the Commonwealth and the world in a statement issued today, calling for unity in the face of the COVID-19 pandemic.

Promising "we will meet again," the Queen thanked front-line workers fighting the global pandemic and encouraged people to stay home.

Although the Queen addresses the Commonwealth every Christmas morning, it's only the fifth time in her 68-year reign that she has spoken specifically to rally Britons.

The statement, which was under five minutes, was recorded Thursday at Windsor Castle, the Queen's main residence.

Canada is increasing its international aid to help stop COVID-19 by more than $100 million. International Development Minister Karina Gould said Sunday another $109.5 million will be allocated, on top of $50 million the government announced earlier in March.

She said $30 million will respond to requests for help from specific countries, $40 million will go to the Coalition for Epidemic Preparedness Innovations co-oridinating the world's efforts to find a vaccine for COVID-19, and $84.5 million will be split between a number of international groups including the World Health Organization, United Nations High Commissioner for Refugees, UNICEF, and the World Food Programme.

Of the 101 cases, 58 are travel-related, and 32 are close contacts of confirmed cases.

However, five cases are the result of community transmission and six cases remain under investigation.

To date, 28 people have recovered from the viral illness.

The premier of Newfoundland and Labrador says he's furious with U.S. President Donald Trump for suggesting the country could ban exports of medical supplies to Canada.

Dwight Ball told a news conference today that the province gained international acclaim for the way its residents helped thousands of stranded airline passengers after the 9/11 terrorist attacks on the United States in 2001.

Ball says that when the United States was in crisis, Newfoundlanders and Labradorians "acted fast and did what was necessary."

The premier said even though he was "infuriated" with Trump's actions, he insisted that the people of the province wouldn't hesitate to repeat what they did during 9/11.

Government House Leader Pablo Rodriguez is asking Parliament to figure out how the House of Commons can move to virtual sittings for conducting regular business.

The House was suspended until April 20 to help prevent the spread of COVID-19 and was recalled with a smaller number of MPs to pass an emergency aid bill to respond to COVID-19. It will be recalled again in the next week to pass additional measures.

Most provinces are extending physical distancing measures well into May at this point, suggesting a return for the House in two weeks is unlikely.

House Leader Pablo Rodriguez is asking Speaker Anthony Rota for advice on how the House might be able to use virtual sittings.

Quebec Premier Francois Legault is extending the closure of non-essential businesses in the province to May 4.

Legault says COVID-19 is still on an upward slope in Quebec and it would be unrealistic to keep to the original April 13 end date.

He says he hopes the number of new cases in the province will peak in the coming weeks.

Canada's public health chief says hospitals should not throw away used masks and other protective equipment because experts are looking to see if they can be disinfected and reused.

Dr. Theresa Tam says protecting health care workers is one of her top priorities in the COVID-19 pandemic.

She says there is work underway looking for the best science that can be used to decontaminate used masks and other equipment.

With the virus now spreading in communities, the province has ramped up testing at the province's main laboratory, where processing of results will be a 24-7 operation as of Monday.

Health officials say six individuals are being treated in hospital, though 53 have already recovered from the viral infection.

Prime Minister Justin Trudeau has announced details for a cash payment for Canadians out of work because of the COVID-19 pandemic.

Applications for the Canada Emergency Response Benefit will be accepted starting Monday, offering Canadians who have lost their jobs because of the crisis $2,000 a month.

Trudeau says it will take three to five days for the money to arrive by direct deposit or 10 days by mail.

Police in Sherbrooke, Que., say a Walmart security guard is fighting for his life after being struck and dragged by a driver who was allegedly enraged by the store's social distancing policies.

They say the incident occurred at about 5 p.m. Saturday when the suspect tried to enter the Walmart with his partner but was told only one person per vehicle was allowed inside.

Another resident of Pinecrest Nursing Home has died, bringing the number of COVID-19 related deaths in the central Ontario seniors' residence to 23.

A wife of a resident at the nursing home in Bobcaygeon, Ont, has also died.

It is one of the worst outbreaks of the novel coronavirus in the country.

At least 24 staff members at the facility have also tested positive for COVID-19.

Another 25 people in Ontario have died after testing positive for COVID-19, bringing the provincial death toll for the virus to 119.

The fatalities come as the overall known caseload jumped past the 4,000 mark with more than 400 new ones reported. More than 150 people were on ventilators.

More than three dozen outbreaks have been reported in nursing homes across the province. The frail elderly are at particular risk for coronavirus, which can produce no or mild symptoms, but can also cause lethal pneumonia.