The latest developments on COVID-19 in Canada on April 9 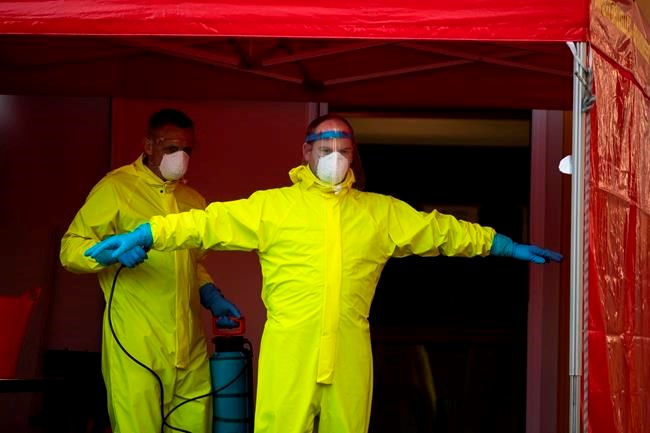 A firefighter, wearing a full protective equipment, is disinfected by a fellow at the firefighters headquarters in Brussels, Thursday, April 9, 2020. The new coronavirus causes mild or moderate symptoms for most people, but for some, especially older adults and people with existing health problems, it can cause more severe illness or death. (AP Photo/Francisco Seco)

The latest news on the COVID-19 global pandemic. This file will be updated throughout the day. (all times Eastern):

There have been two more COVID-19 deaths in British Columbia for a total of 50.

Provincial medical health officer Dr. Bonnie Henry says a virus outbreak in one long-term care facility has been declared over, but there are still outbreaks in 20 other such facilities.

Henry says the majority of the deaths in the province have taken place in those care homes for the elderly.

There have been 34 new positive cases for the virus in the last day for a total of 1,370, although 858 people have fully recovered.

That brings the total number of cases in the province to 1,451.

There have also been three new deaths.

That means 32 people in Alberta have so far died from COVID-19 complications.

A third inmate has tested positive for COVID-19 in a Toronto jail.

The Ministry of the Solicitor General says the inmate in the Toronto South Detention Centre was isolated before the tests were confirmed.

The ministry says an inmate at the Monteith Correctional Complex near Timmins, Ont., has also contracted the virus.

The COVID-19 pandemic has forced the cancellation of Vancouver's annual jazz festival in June.

A statement from the group organizing the TD Vancouver International Jazz Festival says as the crisis has accelerated, it became clear that holding the event would not be safe.

It says the cancellation causes significant financial challenges for the festival and they're working with public funders, the title sponsor and private and corporate donors to secure the festival through this difficult period.

The COVID-19 pandemic has prompted organizers of a Manitoba music festival to cancel this year's event.

Dauphin's Countryfest has been running for more than 30 years and attracts thousands of people each summer to western Manitoba.

Organizers say the decision was unavoidable and taken in consideration of the welfare of the festival patrons.

Newfoundland and Labrador is reporting its third death from COVID-19.

He had been admitted to hospital from his home and had pre-existing medical conditions.

Officials in Saskatchewan are reporting seven new cases of COVID-19, bringing the total in the province to 278.

The Ministry of Health says eight people are in hospital, with two patients in intensive care.

So far, three people in the province have died from COVID-19 complications.

Health officials say 76 people have recovered and the number of deaths remains at three.

They say there are 11 people in hospital with COVID-19, five of whom are in intensive care.

The Manitoba government is instituting fines for people who don't follow public safety orders during the COVID-19 pandemic.

Premier Brian Pallister says people who break rules such as the 10-person limit on gatherings will face fines of $486, and businesses that don't ensure proper distance between customers will be fined $2,542.

Winnipeg Mayor Brian Bowman says the city will have its own fines of up to $1,000 or up to six months in jail for city-owned property such as municipal parks.

A worker at a hospital in Brampton, Ont., has died from COVID-19.

They say he was being cared for in the hospital's intensive care unit.

She says that's the result of the public's co-operation with measures such as self-isolating and social distancing.

Russell is reminding people to skip gatherings this holiday weekend.

Quebec is reporting 41 new deaths today linked to COVID-19, bringing the total to 216 in the province.

Provincial health authorities say they have identified 10,912 confirmed cases of the virus, with 679 hospitalizations and 196 in intensive care.

Legault cautioned that not all long-term care facilities in the province have been impacted by COVID-19, identifying six facilities in particular that account for the lions share of deaths.

Ahead of the Easter long weekend, Legault says he wants people to steer clear of the elderly to reduce the risk of infection, but to make sure they still call them.

B.C. Finance Minister Carole James says the province lost 132,000 jobs last month, but it's going to get worse before it gets better due to the COVID-19 pandemic.

She says the latest Statistics Canada Labour Force numbers indicate B.C.'s jobless rate rose to 7.2 per cent from five per cent in March.

James says she expects the jobless numbers to increase over the coming weeks as they indicate the ongoing impact of the pandemic on the economy and workers and families.

She says the province has introduced a $5 billion action plan to help workers, families and businesses endure the pandemic.

The number of confirmed cases of COVID-19 on Prince Edward Island remains unchanged at 25.

She says provincial officials are making more than 1,000 telephone calls every day to make sure that people required to self isolate are doing so.

Deputy prime minister Chrystia Freeland says there is no way to know how long the border closure with the U.S. will last.

The prime minister had said earlier today that much of Canada's return to normal will depend on a vaccine that could be months away.

Freeland says making predictions on what that means for the border is foolhardy in the extreme.

Chief Public Health Officer Dr. Theresa Tam said earlier keeping Canada's case load low does depend on what happens in other countries, including the U.S.

There are four more confirmed cases of COVID-19 in Newfoundland and Labrador, bringing the total to 236.

Dr. Janice Fitzgerald, chief medical officer of health in the province, says six patients are in hospital with two in intensive care, and 96 people have recovered.

The province has tested 4,390 people.

Data released Wednesday indicated the province is slowing the spread of COVID-19 so far, but Fitzgerald says the system could become overburdened quickly if people do not follow public health measures.

The Saskatchewan government is promising one-time emergency bursaries to post-secondary students struggling with the COVID-19 pandemic.

The Ministry of Advanced Education says it will dole out up to $1.5 million in emergency financial aid to students whose studies and jobs have been affected as the province tries to contain the spread of the virus.

The federal government says over five million people have now applied for the emergency response benefit.

Of that, 4.6 million have had their payments processed already.

The benefit is part of a multi-billion-dollar aid package now rolling out to assist Canadians with the financial fallout of COVID-19.

Trudeau says while he hopes to spend some time with his family this Easter weekend, his focus is on getting new emergency aid legislation passed.

He says discussions with opposition parties continue on the bill, which backs up the new wage subsidy program.

Trudeau says it is important to debate the democratic processes that could be put in place in the COVID-19 era, which the opposition wants to have.

Prime Minister Justin Trudeau says it will take months of a continued and determined effort to avoid a COVID-19 worse-case scenario.

Trudeau is commenting on models released this morning forecasting how the continued spread of the pandemic will pan out based on how aggressively Canadians follow physical distancing protocols.

He says Canada is at a crossroad and the outcome will depend on how people behave, given there could be ongoing waves of the coronavirus.

He says this means physical distancing is and will be Canada's new reality until a vaccine is found.

A total of 42 inmates of federal prisons have tested positive for coronavirus — a jump of about 30 per cent over the past day.

Quebec, with 19 inmate infections, has been hardest hit. British Columbia has reported 15.

Dozens of guards have also been infected.

Nova Scotia has recorded its second death related to COVID-19.

Health officials say a woman in her 90s with underlying medical conditions died in the Cape Breton Regional Hospital on Wednesday.

Ten individuals are in the hospital, four of those in intensive care — and 82 individuals have now recovered.

Ontario is now reporting 200 deaths from COVID-19, an increase of 26 people in the past day.

There have been 483 new confirmed cases since Wednesday, with a provincial total of 5,759.

More than 2,300 cases have been resolved, which is 40 per cent of Ontario's total COVID-19 confirmed cases.

A First Nation in southwestern Ontario says one its members has died of COVID-19.

The First Nation says there are eight cases of COVID-19 on the reserve.

Federal projections say Canada could see the end of the first wave of the COVID-19 pandemic before autumn, but only if strong physical distancing measures are strictly maintained the whole time.

Even in that best-case scenario, the federal public health agency projects that 4,400 to 44,000 Canadians could die of COVID-19 in the coming months.

The agency says if the containment measures Canadians are living under now are relaxed or abandoned, the death toll could be much higher.

Canada Goose Holdings Inc. is moving to increase its domestic production of personal protective equipment for health-care workers across Canada.

It now says it will begin to reopen its other Canadian facilities over the next two weeks to bring all eight of its locations into production.

It says at full capacity as many as 900 employees will be working to support the efforts.

WestJet says it plans to bring back nearly 6,400 employees on to its payroll with the help of Ottawa's emergency wage subsidy program.

WestJet chief executive Ed Sims made the announcement in a video posted to Twitter.

He says employees will be back on the company payroll once the federal government has approved the Canada Emergency Wage Subsidy program.