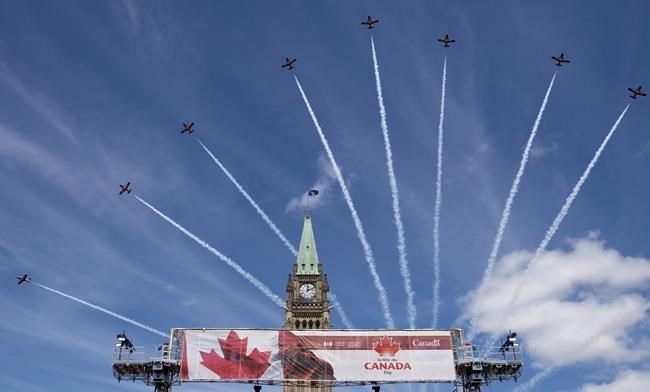 Royal Canadian Air Force Snowbirds fly past the Peace Tower during the Canada Day noon show on Parliament Hill in Ottawa on Monday, July 1, 2019. Federal officials are releasing the details of how July 1 will go down this year without the usual festivities on Parliament Hill acting as an anchor for cross-country parties. THE CANADIAN PRESS/Justin Tang

OTTAWA — Canadians are being offered a buffet of online videos, crafts and even a stop-motion animation app to celebrate Canada Day from home.

Federal officials are releasing the details of how July 1 will go down this year without the usual festivities on Parliament Hill anchoring cross-country parties.

Canadian Heritage, the department in charge of planning the Canada Day show, cancelled the in-person event this year due to public health concerns related to the COVID-19 pandemic.

Many of the online activities are now live, but videos with chef Ricardo Larrivee, former Olympic figure skater Kaetlyn Osmond and travel blogger Andrew Gunadie — better known as Gunnarolla — will be available at the end of the month.

Canadian Heritage says in a release that entertainment usually on the main stage set up on the lawn in front of the Centre Block will also go online this year.

Country singer Paul Brandt will headline the hour-long midday show that will also include a hat tip to the 40th anniversary of O Canada as the official national anthem.

The evening show will feature collaborations from various artists across the country.

Among the headliners for the two-hour evening show are singers Alanis Morissette, Avril Lavigne, Corneille and Sarah McLachlan, rapper Loud and bands Radio Radio and The Sheepdogs.

The shows will stream on the department's Facebook, YouTube and Twitter pages, as well as on CBC and Radio-Canada. CPAC will also carry the noon show.

The evening show traditionally ends with a large fireworks display over Parliament Hill, but instead the online version will have a greatest hits montage.

Canadian Heritage is also promising a web app for digital fireworks, but says more details on that will be forthcoming.

This report by The Canadian Press was first published June 15, 2020.

Note to readers: This is a corrected story. A previous version misspelled Alanis Morissette's last name

Canadians can now download new COVID-19 exposure-alert smartphone app
Jul 31, 2020 10:46 AM
Comments
We welcome your feedback and encourage you to share your thoughts. We ask that you be respectful of others and their points of view, refrain from personal attacks and stay on topic. To learn about our commenting policies and how we moderate, please read our Community Guidelines.