Ralph Klein's niece does something nice for Innisfail in his name 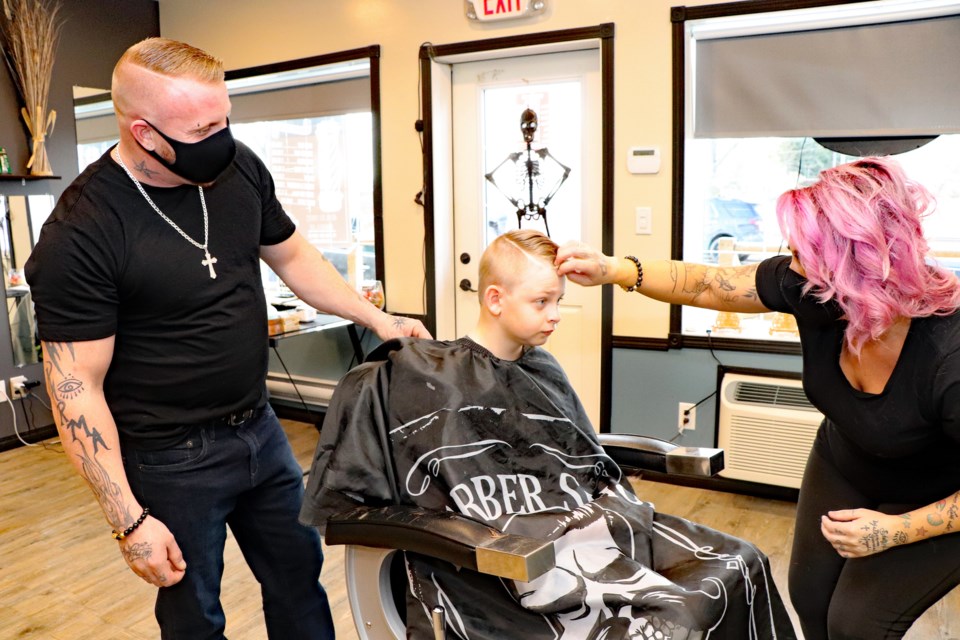 INNISFAIL – Natalie Klein recently had a moment of clarity from an inspirational suggestion from her father Lynn.

She was set to create something heartwarming for her new town during the upcoming holiday season amidst the devastating COVID-19 pandemic.

Her dad suggested to launch it in honour of her uncle, his brother Ralph Klein – the 12th premier of Alberta and former mayor of Calgary.

“My dad Lynn kind of inspired me to go ahead and do it, just because I had the idea. I was a little unsure, and he said, ‘No, that is something Ralph would have really wanted,” said Natalie, adding her dad funded the marketing flyer. “And that is why at the bottom it says in memory of Ralph Klein.”

Natalie, along with her husband Yanik Brazeau, are the new owners of Innisfail’s new Bladez 2 fadez Barbershop, which opened Aug. 7 at 4919 -53 St. following the couple’s arrival to town after spending the previous 10 years in Red Deer.

“Everyone has been so welcoming. I figured it was time to give back a little,” said the 42-year-old businesswoman. They came up with the idea of a special small business Christmas fundraiser, and one inspired by the memory of her late uncle.

“(Ralph) was for the people. He was about giving back and really listening to the people,” said Natalie. “And that is why I feel this is something he would have really wanted. That is why the kick off date is November 1 because that was Ralph’s birthday.

The idea for the Christmas fundraiser is also unique. It is one designed not to interfere in any way with the longstanding exemplary work of the Innisfail Christmas Bureau but one aimed for the struggling folks who just miss qualifying for the bureau. The fundraiser is for, as Natalie terms, the “in-betweeners”.

“As a barber I have heard a lot of customers coming in and they’re the in-betweeners, the ones struggling or borrowing money who come and pay for their kids’ haircut,” she said. “That is what drove me to get these in-between families because I have been there myself years ago, an inbetween family. I figured we could help some of these folks.

“I did not want to interfere with that (Christmas Bureau) because it is a very good resource for people who do meet that threshold for the Christmas Bureau,” she added. “I am trying to aim at the families that didn’t, because of the higher income taxes they wouldn’t qualify because it’s based on income.”

With 1,000 tickets to sell for $5 each, the goal is to help 10 to 15 local families, the ones who fall between the cracks, by providing them with food and gifts for the holiday season. To get there, Natalie has partnered with other local small businesses, including The Coffee Cottage and Revive Cannabis.

“These folks are helping the business of Innisfail, and so I got businesses together to see if it would be something they would be interested in, like donating baskets from their business or gift certificates,” said Natalie, adding the small businesses involved will deliver the hampers directly to the families on Dec. 20.

She said each family would get about $500 of groceries, toys and backpacks for the kids, along with a family pack of haircuts from Bladez 2 fadez Barbershop.

Given the challenges of times, with the COVID pandemic forcing unwanted change everywhere, Natalie’s project is an ambitious one for sure. But she is optimistic Innisfailians will rise to this challenge.

“This is something I'm compelled to do and something Ralph would have wanted, to support the people in our community during this pandemic,” said Natalie.