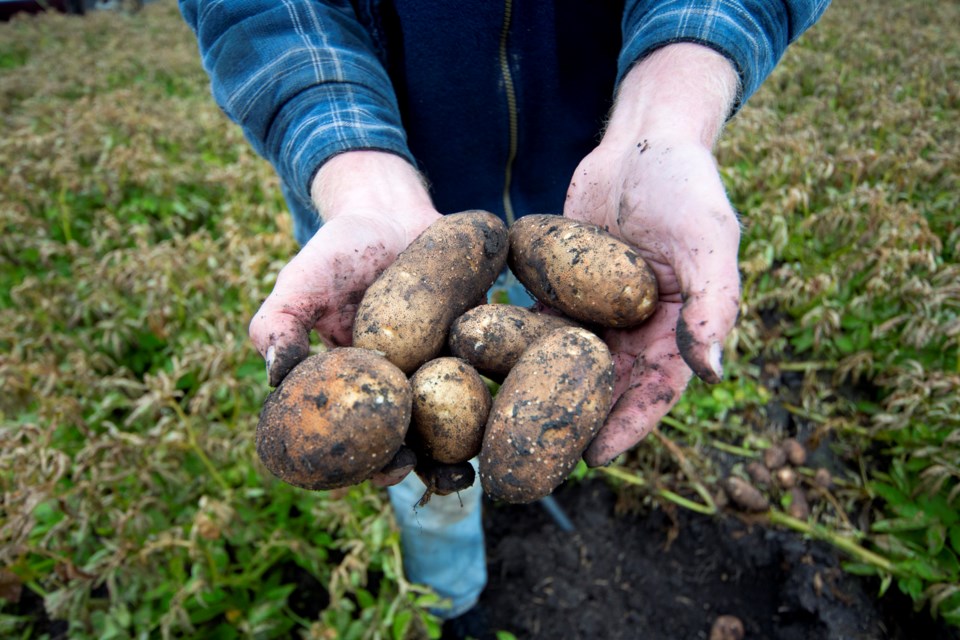 As Alberta’s potato industry reels from the devastation of COVID-19, one industry spokesperson says he is worried the mental health and wellness of farmers could be at stake.

As restaurants closed their doors to ward off the spread of the pandemic, potatoes that would otherwise go toward fries and chips sat in producers’ freezers instead. As a result, farmers have been advised to cut the volume of potatoes they grow this year by up to 30 per cent.

That means the potato processing industry is facing down a $60- to $70-million loss, while seed potato farmers will lose between $5 and $6 million.

According to Statistics Canada, 54 per cent of Canadians eat out in restaurants once a week or more. The lion’s share of potatoes grown in Alberta get bought up by restaurants, while the remaining potatoes are grown for cooking and eating at home. Last year, the industry produced 850,000 tons of potatoes for fries and chips; overall, Alberta potato growers churned out 1 million tons.

Hochstein said the industry is sitting on some 100,000 tons of potatoes right now that need to be processed by September. As the backlog grew and freezers hit their limits, processing plants such as McCain Foods, Lamb Weston and Cavendish Farms shut down temporarily, partly because they had nowhere to send the finished product.

“The plants are up and running now, but we’ve lost so many run days in a plant that they can’t begin to use all of these potatoes,” Hochstein said. There’s nowhere else for these potatoes to go, either: the type of potato used for french fries, the russet Burbank, doesn’t make a very good table potato.

“They’re planted for a specific use, and that is predominantly french fries, hash browns and the breakfast patties – frozen potato products,” Hochstein explained.

Rerouting potatoes that were once destined for restaurants isn’t easy. The majority of fries produced in plants are packed in five-pound clear plastic bags and don’t have a consumer nutritional label on them. Hochstein said once those fries are packaged, they can’t be repackaged.

However, McCain Foods and some other producers have been able to redirect some of their products to grocery stores, although there’s a limited capacity for that as well. The industry is trying to get its products anywhere they will be valued, including food banks and feedlots.

Still, the oversupply of potatoes mean farmers are sitting on literal tons of crop. Russ Van Boom, a seed potato farmer, who lives in Sturgeon County, said reducing his planting by 30 per cent means seeds are going to waste.

Van Boom started growing seed potatoes last summer that were destined to be planted in farms this summer. The farmer made the decision on how much to grow nearly a year before COVID-19 rocked the agricultural industry.

In 2019, consumers were eating plenty of potatoes. Demand was so high, Van Boom grew more seed potatoes to meet this year’s expected demand.

“At that time, the demand in the potato industry was such that ... expansions were happening like crazy. So as much as we could grow, the market was really calling for that,” Van Boom said.

Now, he has more than 1 million pounds of potatoes, worth around $250,000, left over and he has to find a way to dispose of them. He said a fifth of his crop is left in the bins.

Since they’ll go bad before next season, he will have to dump them out in the field and bury them so they don’t become a magnet for disease. The farmer said he will also try to find a feedlot to take them, but the market is so saturated with excess potatoes it could be difficult to find a buyer.

Van Boom said he has to get rid of excess potatoes each year, but this is a “significant amount.”

“It’s not a great situation.”

Van Boom isn’t sure yet the exact dollar figure attached to his losses this year, but he expects his farm to operate at a loss. His usual profit of five to 10 per cent is just enough to make a few small improvements to his farm; now, he is working just to pay the bills.

He’s still looking at the positive side, though. In the years leading up to 2020, although weather buffeted the potato industry, demand for potatoes was booming. He also built social distancing into his lifestyle by living out on his farm.

“I take that as a blessing to say that our health has maybe been protected through this,” he said.

He doesn’t have to struggle to get four or five workers on his farm, either, since he is within commuting distance from Edmonton.

He remains an optimist.

He says there’s an opportunity now for the government to step in with more support for the industry, to help farmers surmount these challenges.

In early May, Alberta Premier Jason Kenney and Alberta Agriculture Minister Devin Dreeshen announced new supports for the potato industry. The province began increasing interim payments under the federal/provincial AgriStability program to 75 per cent from 50 per cent for the potato industry, but that doesn’t cover inputs and equipment – the main expense on a potato farm.

The federal government’s Canada Emergency Business Account (CEBA), providing interest-free loans of up to $40,000, won’t do much to help farmers like Van Boom, either.

“In this day and age of farming – I guess I appreciate the gesture, but the scale of farm that is necessary to be sustainable these days, the impact $10,000 is going to make ... is very, very minimal,” he said.

Jennifer Henderson covers rural Alberta matters under the Local Journalism initiative, which is funded by the Government of Canada

Small Business Saturday encourages shoppers to buy local this holiday season
Nov 28, 2020 2:20 PM
Comments
We welcome your feedback and encourage you to share your thoughts. We ask that you be respectful of others and their points of view, refrain from personal attacks and stay on topic. To learn about our commenting policies and how we moderate, please read our Community Guidelines.