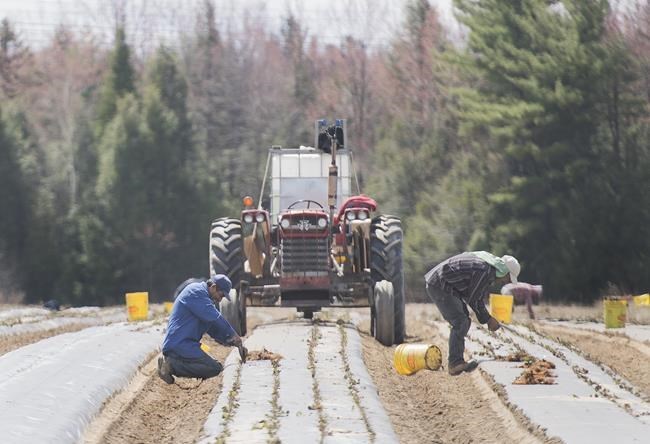 Temporary foreign workers from Mexico plant strawberries on a farm in Mirabel, Que., Wednesday, May 6, 2020. The Mexican government says it will resume sending farm workers to Canada after securing a promise of better working conditions to curb outbreaks of COVID-19. THE CANADIAN PRESS/Graham Hughes

OTTAWA — The Mexican government says it will resume sending farm workers to Canada after securing promises for more inspections and oversight to curb outbreaks of COVID-19.

At least two Mexican men have died and hundreds more have fallen ill with COVID-19 in recent weeks on farms across the country.

The situation led Mexico to temporarily stop allowing workers to leave for Canada, sending shock waves through the agricultural sector, which is highly dependent on foreign labour.

But the Mexican government says it has now struck a deal with the federal Liberal government that will lead to improvements in the temporary foreign worker program.

In a press release late Sunday, Mexico says Canada has committed to increased inspections, as well as more support for Mexican officials and workers to identify and report unsafe working conditions.

A working group will also be set up with Mexican and Canadian government officials to deal with the issue.

In a letter to Mexico's ambassador to Canada, sent Friday, federal employment minister Carla Qualtrough says Canada is committed to ensuring the safety of people crucial to Canada's food security.

A copy of the letter was obtained by The Canadian Press.

It lays out some of the detailed options under consideration by the federal government, including assessments of farms where there have been outbreaks to see what instructions need to be improved, as well as increased inspections on farms where new clusters of COVID-19 infection emerge.

The federal government also promises to reach out to employers to make sure they are following all the rules that have been put in place to slow the spread of COVID-19 on farms.

"In cases of significant non-compliance by employers of temporary foreign workers, strict sanctions will be applied," the letter says.

A spokesperson for Qualtrough said the government had no further comment and would let the letter speak for itself.

There are no timelines attached to the Liberal government's commitments, but the letter describes them as "short-term measures," and promises the government is exploring other options.

In their press release, the Mexican government said they appreciate that Canada was willing to work with them to find solutions, and the deal is evidence of the strong bilateral relationship between the two countries.

This report by The Canadian Press was first published June 21, 2020.