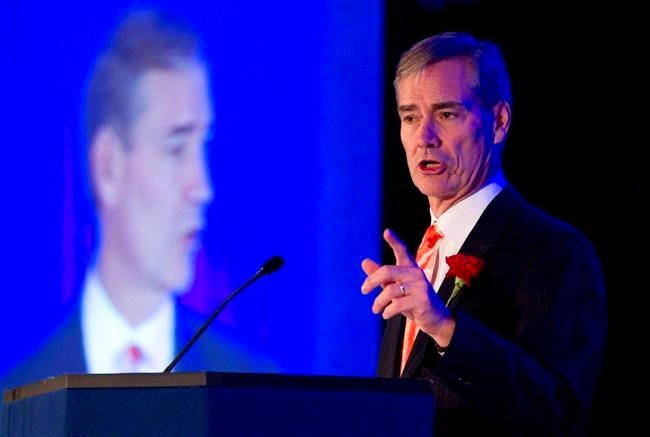 Angry comments from the CEO of Maple Leaf Foods Inc. about the circumstances surrounding the downing of a Ukrainian airliner in Iran are unprecedented, experts say.

Michael McCain tweeted from the company's Twitter account Sunday night, saying he's "very angry" that a colleague's wife and child were among 57 Canadians killed when Ukraine International Airlines flight PS752 was shot down shortly after takeoff from Tehran airport on Jan. 8, in what Iranian officials have described as an accident.

He says the Canadians on board are "collateral damage" from the behaviour of "a narcissist in Washington." 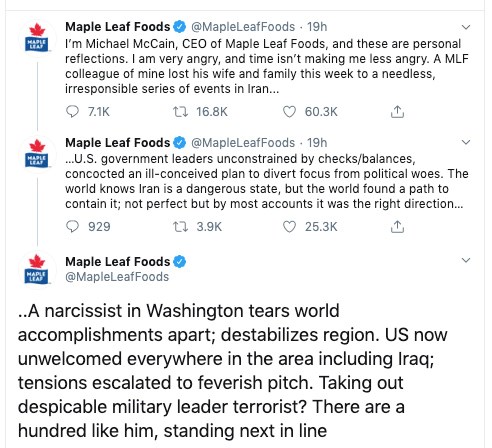 The company declined an interview request and says McCain "felt the tragedy warranted his response."

Dimitry Anastakis, a professor at The University of Toronto's Rotman School of Management, says he's never heard a Canadian business leader make such an unprovoked, definitive statement on an international-relations issue.

He says there are multiple levels of risk when a business leader enters a political debate, including backlash from Canadian and American consumers, as well as possible retaliation from the U.S. government.

Robert Carter, an industry adviser with The StratonHunter Group, says he doubts any fallout from American customers will be lengthy.

Both men say it's possible that Canadians, who are mourning the national tragedy, may rally around the business in support of McCain's comments.

This report by The Canadian Press was first published Jan. 13, 2020.

Companies in this story: (TSX:MFI)

Note to readers: This is a corrected story. An earlier version stated that 63 Canadians were on board the flight.

Supreme Court dismisses B.C.'s appeal in Trans Mountain pipeline case
Jan 16, 2020 2:15 PM
Comments
We welcome your feedback and encourage you to share your thoughts on this story. We ask that you be respectful of others and their points of view, refrain from personal attacks and stay on topic. To learn about our commenting policies and how we moderate, please read our Community Guidelines.