The tight-knit local hockey community is deeply shocked and saddened by the horrific bus-truck crash that killed 15 and injured more than a dozen others in Saskatchewan on Friday night, members have told the Gazette.
Apr 10, 2018 6:31 AM By: Craig Lindsay 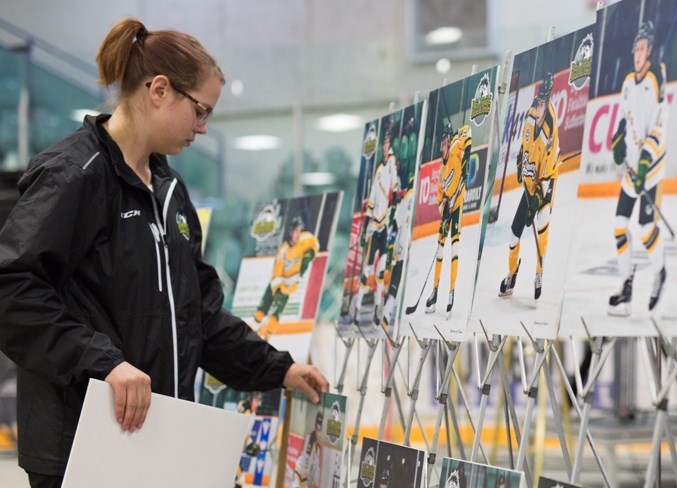 Kathleen Keen, billet coordinator for the Humboldt Broncos, arranges photos of Broncos players in front of the stage for a vigil at the Elgar Petersen Arena in Humboldt, Sask. on April 8.

The tight-knit local hockey community is deeply shocked and saddened by the horrific bus-truck crash that killed 15 and injured more than a dozen others in Saskatchewan on Friday night, members have told the Gazette.

Graysen Cameron of Olds was one of 15 Humboldt Broncos junior hockey players injured in the bus crash northeast of Saskatoon.

The crash occurred at about 5 p.m. as the team was on its way for a Saskatchewan Junior A hockey playoff game in Nipawin.

Cameron is in his first year with the Broncos. Last year he played with the Red Deer Optimist Chiefs midget AAA team. Cameron was brought up by the Mountainview Colts during last year's playoff drive and played seven games with the team.

Colts captain Colton Anderson was a linemate with Cameron during that 2016-17 playoff run.

Anderson said the hockey community is reeling after the news but has really been pulling together.

Anderson said that Cameron was an ideal teammate and linemate when they played together.

"He's a really outgoing and friendly guy," said Anderson. "He's a good player too. He works really hard. During the off-season he trained really hard."

Anderson said he has talked to Cameron after the accident on SnapChat.

"I talked to him briefly on SnapChat over the phone," he said. "He's doing OK. He's pretty sore but doing OK."

Colts team president Keith Klinck said the players are dealing as best they can. His sons Alan and Ryan played last year in the playoffs on the Colts with Cameron.

"It's a horrific, tragic accident, that's for sure," said Klinck. "The whole organization, our hearts go out to all the families of the Humboldt Broncos team. Especially for the local boys that have been involved."

Keith Klinck said that all of the boys are good friends with Cameron.

"My son is very good friends with him," he said. "A lot of the boys played with him over the years – that's for sure. A bunch of them got together last night and are dealing with it. I think they're dealing with it just by getting together and being with their friends in the Olds area.

"With Ryan (McBeath) passing away two weeks ago it's been a tough time for these younger guys – they all knew each other, and now they have this to deal with this."

The hockey community has really come together and everyone is really supportive, said Klinck.

Cremona hockey association president Ksan Fawns says hockey players and supporters in the village are saddened by the tragedy.

A moment of silence was held at the association’s awards night on Saturday.

“The hockey community is a huge community and a tight-knit community as well,” said Fawns. “Everyone’s thoughts are with the families."

– with files from Dan Singleton