On Thursday it’s budget day in Alberta, a time that will cruelly and ironically remind residents that last year’s projected eye-popping $6.8-billion deficit was actually the good old days.
Feb 22, 2021 8:45 AM By: Canadian Press 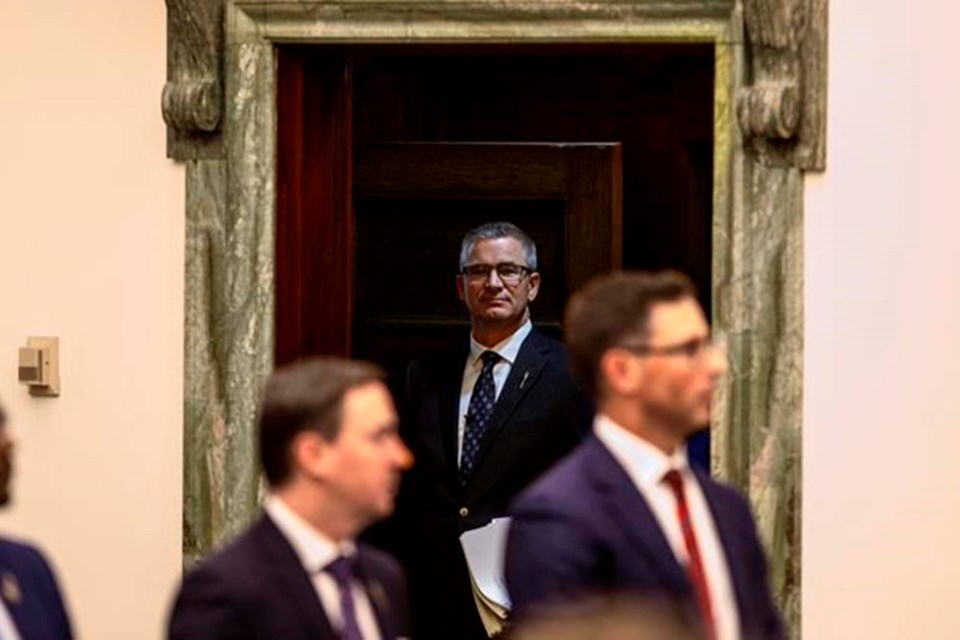 Finance Minister Travis Toews (back) waits to deliver the budget in Edmonton on Feb. 27, 2020. THE CANADIAN PRESS/Jason Franson

EDMONTON — On Thursday it’s budget day in Alberta, a time that will cruelly and ironically remind residents that last year’s projected eye-popping $6.8-billion deficit was actually the good old days.

Since then, that deficit has tripled to $21 billion while taxpayer-supported debt has ballooned to $97 billion, victims of oil price wars and the COVID-19 pandemic that have decimated Alberta's bottom line.

Finance Minister Travis Toews says the deficits will continue and the budget will focus on COVID-19 pandemic aid along with getting the economy back on its feet.

“This is a continued work in progress, but economic recovery is a very high priority and that will be reflected in the budget,” Toews said in an interview.

“Our number 1 focus right now is making sure we’re resourcing health to deal with the pandemic.”

The one certainty will be no new taxes in a province that currently has the lowest overall tax regime in Canada.

Premier Jason Kenney took any tax hikes off the table last week, particularly any notion of a sales tax, saying now is not the time to be dipping into pockets.

Toews said post-pandemic will be the time to have a larger discussion, perhaps a panel, on a root-and-branch review of revenue and taxation.

“I have been clear that at some point in time it will be important to have to have a revenue discussion,” said Toews.

“(But) it won’t be accompanying this budget. A look at revenues, a revenue panel, the appropriate time for that would be when we’re well past the pandemic, when we have much better economic clarity.”

The budget comes as the global energy landscape increases its reliance on renewables and the United States, Alberta’s big-ticket oil customer, marches on to energy self-sufficiency.

Tombe, with the University of Calgary, notes Kenney’s government has promised to reduce public sector spending to put Alberta in line per capita with comparable jurisdictions like B.C., Ontario, and Quebec.

Tombe said even when that is done by 2022, as promised by the government, there will still be a gaping hole of red ink, which Tombe estimates at $7 billion a year.

So the clock is ticking, he says, on how Alberta plans to pay its way.

“The conversation has to turn to the (revenue) side of the budget. And it’s that conversation that I hope the government starts or signals the need to start in (Thursday’s) budget … so that this time next year we’re ready to actually swallow some tough medicine,” he said.

The hot topic is a sales tax. Alberta doesn’t have one and hasn’t since before the Second World War.

Alberta had a two-per-cent sales tax in 1936. It was a highly unpopular levy that was quietly expunged a year later. Then the oil boom kicked in post-war and the topic was buried for good.

Tombe said every other province has had a sales tax for at least the last 60 years, the last province to adopt one being Ontario in 1961.

“We historically spend above average and we tax below average. That was a luxury we enjoyed because of very large resource revenues, but Alberta has never seen resource revenues account for as small a share of the budget as they are now since the late 1940s,” said Tombe.

Last week, the Business Council of Alberta, representing chief executives of big-hitter companies like Suncor and WestJet, publicly urged Alberta to consider a sales tax, if only to get budgets on a predictable, sustainable foundation.

So why consult the public on fixing revenues? Why not just implement?

If you want lasting change, especially on unpopular or controversial issues like a sales tax, public buy-in is critical, said Tombe.

He pointed to the previous NDP government’s consumer carbon tax. It was a levy that despite being leavened with rebates for lower and middle-income earners was one that Kenney was able to successfully leverage as a campaign cudgel against the NDP by characterizing it as a surprise sucker punch to the electorate.

“When you just implement something out of the blue, that can itself become a source of opposition to the policy,” said Tombe.

“Albertans need to see themselves in the policy decision.”

Opposition NDP Leader Rachel Notley said the budget will be an issue not of numbers but of trust -- trust she says Kenney has squandered through a series of recent scandals, including a plan to divest or close some provincial parks (since abandoned) and an under-the-radar plan to strip mine the Eastern slopes of the Rockies (now rescinded).

“This is a government that is very comfortable with saying that they’re doing one thing and actually doing something very different,” said Notley.

“Albertans have been figuring out how to see through that, and so that’s why you see Jason Kenney having the lowest (polling) trust levels of practically any premier in the country.

“That’s going to be a feature of this budget no matter what: we’re going to have look very closely at what they’re actually doing and look behind what it is they say they are doing.”

This report by The Canadian Press was first published Feb. 21, 2021.