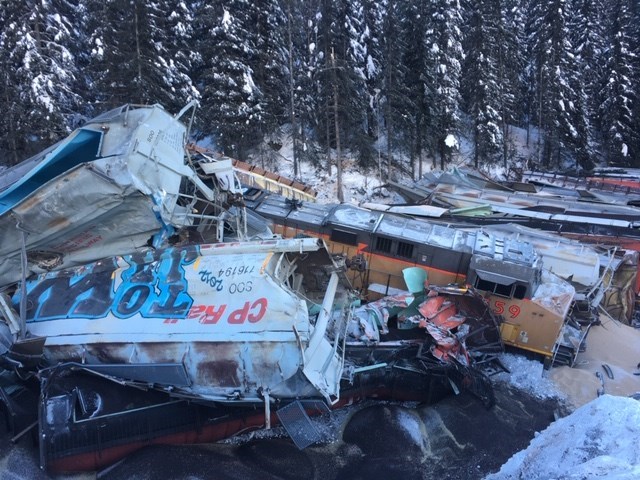 The Transportation Safety Board (TSB) is investigating a train derailment near Field B.C. on Monday (Feb. 4) that killed three CP Rail workers on board.

FIELD, B.C. – Nearly a year after the fatal Field train derailment killed three CP Rail workers, the Alberta Federation of Labour is calling for an independent investigation into their deaths.

"The deaths of these workers have yet to be fully investigated by an independent body to determine if there is any criminal liability on behalf of CP Rail. Rather, CP Police Service, a police service directly employed by CP Rail, conducted a flawed investigation into the deaths," read an emailed statement from the president of the Alberta Federation of Labour.

"The investigation from the outset was narrowly focused on the three workers killed and their actions while ignoring the role CP Rail and management played. When investigators started asking for more evidence from the company, CP Rail shut down the investigation and ordered their police officers to stop investigating."

The incident came as a shock to friends and family last February as it was revealed the 99-grain-car train's air brakes failed resulting in the crash.

The request for an inquiry follows a seven-month investigation from CBC's Fifth Estate into the derailment and the investigation that followed.

Where Gil McGowan, president for the AFL said the episode shed light on a number of questions left regarding how the CP workers were killed and who is responsible.

Originally the Transportation Safety Board of Canada confirmed in a press release that during the last stop before the derailment the airbrakes were applied but the handbrakes were not, which allowed the stationary train to move.

“The occurrence crew had just arrived and boarded the train, but were not yet ready to depart. The train had been stopped on the grade, with the airbrakes in emergency for about two hours when the train began to move on its own,” TSB senior investigator James Carmicheal said in the Feb. 8, 2019 press release.

“There were no handbrakes applied on the train. The train then accelerated to a speed well in excess of maximum track speed of 20 miles per hour for the tight curves and steep mountain grade and the train derailed.”

The Transportation Safety Board of Canada ended up issuing two rail safety recommendations two months after the incident for safety procedures to be applied to all trains stopped on "heavy grades" and "mountain grades."

But the Alberta Federation of Labour statement noted there were many hazards and known issues ignored that night of the crash "under pressure from Canadian Pacific Railways (CP Rail) management to keep the train moving – including a nearly identical issue the day before this deadly crash at the same spot."

The AFL is now demanding an independent criminal investigation into CP Rail under the Westray Act of the Canadian Criminal Code.

"All employers have a duty to ensure work is safe for workers and the public. Every worker deserves to make it home at the end of a shift," the statement reads.

"If an employer is criminally negligent in their duty and they kill a worker, they deserve to go to jail."