Foothills region parks among those to require new access fee

Brent Calver
May 5, 2021 3:30 PM
Previous Next
1 / 1 The entrance to Kananaskis Country on Highway 546 west of Turner Valley on May 2. Starting June 1, visitors will be required to purchase a Kananaskis Conservation Pass for $15 per day or $90 per year to visit parks in Kananaskis, including Sheep River Wildland and Bluerock Provincial Parks.Brent Calver/OkotoksToday.ca
Expand
Previous Next

Albertans will soon be required to pay to visit much of Kananaskis Country, including parks accessed from the Foothills region.

Starting June 1, the Government of Alberta will require a Kananaskis Conservation Pass to access several provincial parks and recreation areas in the Kananaskis and Bow Valley regions pending the passing of Bill 64, the Public Lands Amendment Act.

“More visitors to K-Country is great news, however it has increased pressures on the land in a very big way,” Environment and Parks Minister Jason Nixon said in an April 27 press conference.

“This has put an increased strain on our facilities and our services and our resources that are needed to maintain K-Country,” he continued, citing increased litter, illegal parking, overcrowded day use areas and trails, in addition to injuries and human-wildlife conflicts

Peter Lougheed Provincial Park and Elbow-Sheep Wildland Provincial Park, which are accessed from Foothills County via Highway 40 between June 15 and December 1 also fall within the boundaries for the new pass.

Banff-Kananaskis MLA Miranda Rosin joined Nixon in the announcement, echoing the need to respond to increased use.

“This increased visitation, as experienced by literally anyone who tried to come out here for a day hike last summer, has led to traffic jams, illegal parking strain on infrastructure capacities and more emergency calls than, Banff, Jasper, Waterton, Yoho, and Kootenay National Parks combined,” she said.

“Our residents, local businesses, conservation officers, and search and rescue teams have seen this firsthand.”

The expected $15 million annual revenue from the new fee will be reinvested into the region, she added.

This will include hiring additional conservation officers and park employees, increasing the protected land mass of Kananaskis, and reopening visitor information centres.

It will, according to the Government of Alberta’s website, replace the cross-country trail grooming park pass program that was implemented last year.

First Nation individuals with status, AISH recipients, and those who need to stop in the area for business purposes will be exempt from the fees. 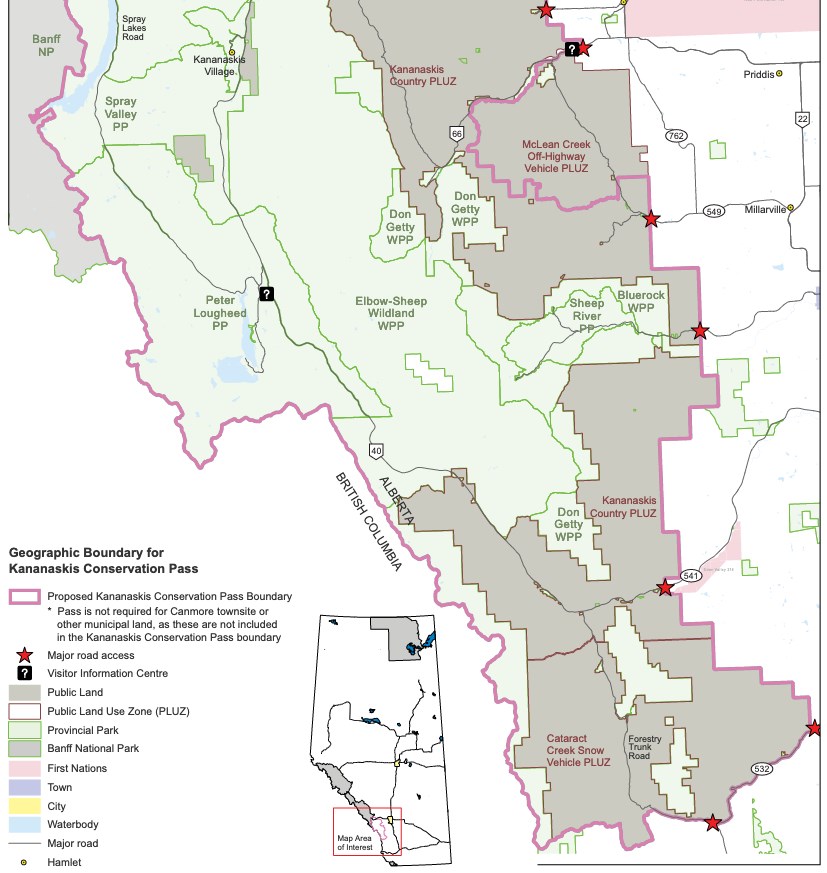 The boundaries for parks and recreational areas covered by the new Kananaskis Conservation Pass include Bluerock Wildland Provincial Park, Sheep River Provincial Park, and Mesa Butte Provincial Recreation Area near Millarville and Turner Valley. (Map courtesy Government of Alberta)
Black Diamond resident Sheila Stacey, who has frequented the Rockies for over three decades, said she has mixed feelings about the new fee and what it means for equal accessibility.

“I think it could be beneficial,” she said, noting increased usage has taken a toll, primarily at trailheads. “But I’m very suspicious and concerned with the way in which they rolled this out.

“I’m concerned as someone who lives and recreates close by the mountains. It’s just like death by a thousand fees.

“This is also a consistent way the government has been working where they’re throwing something out there. I think they need to consult the people that are impacted.”

Growing up less privileged with less access to outdoor pursuits during childhood, Stacey said she is concerned the fee will make the outdoor spaces inaccessible to lower-income Albertans.

“I can afford this, but there are a lot of people who cannot,” she said. “That is a big concern when we are trying to promote healthy lifestyles, good mental health, and we’re in the middle of a global pandemic.

“And then we put a fee on already-strained communities and people who might be struggling financially.”

Black Diamond mayor Ruth Goodwin said in a written statement free access to the parks provided a haven from the stresses of the COVID-19 pandemic.

“The hours of hiking, biking, camping, and feeling normal in a time of angst and incredible financial uncertainty was and has been priceless,” she said.

“It was a free activity that our residents and taxpayers used, revisited, and experienced for the first time.”

The Alberta Wilderness Association (AWA) Conservation Director Ian Urguhart said in an April 27 press release he believes this fee is a “cash grab that will deter Albertans from visiting Kananaskis and shift the visitation pressure to provincial parks outside of K-Country that don’t charge a vehicle entry fee.”

He cited other jurisdictions, including Washington State parks, where a fee was implemented in 2011 and visitation fell by seven million visits per year from previous levels.

“The evidence suggests that vehicle fees deter people from visiting parks,” said Urquhart. “By not applying this bad idea to all provincial parks, the Kananaskis fee will likely shift visitation pressures to other parks in the region.”

Bill 64 would would see random campers ages 18 and up pay for a $30 per person annual fee or $20 three-day pass to camp on public land starting June 1.

A $30 trail permit fee is also proposed in the bill for the fall.

The Kananaskis Conservation Pass will go on sale June 1.

About the Author: Brent Calver