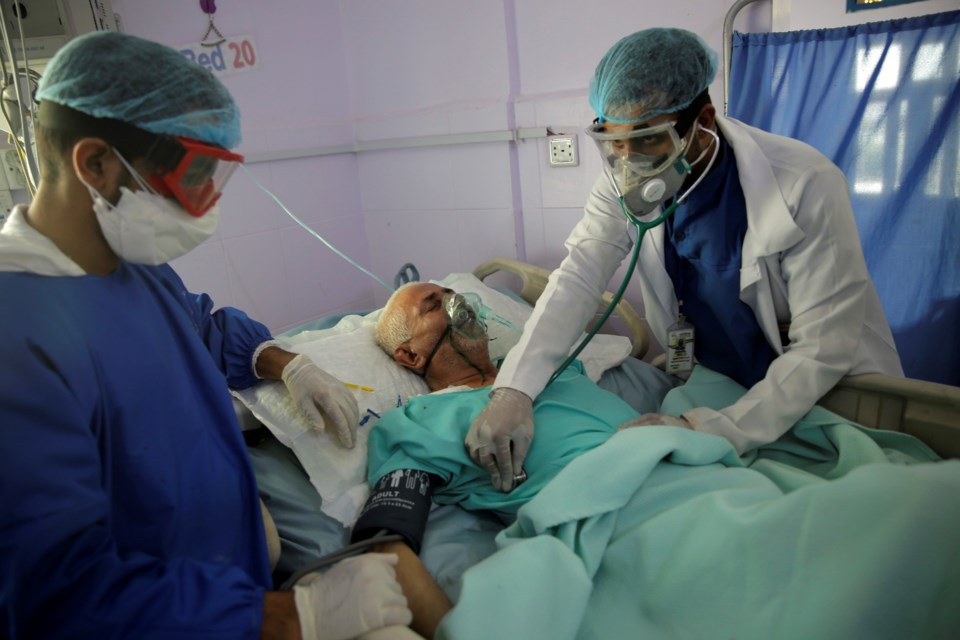 In this Sunday, June 14, 2020 file photo, medical workers attend to a COVID-19 patient in an intensive care unit at a hospital in Sanaa, Yemen. Researchers in England say they have the first evidence that a drug can improve survival from COVID-19. The drug is a cheap, widely available steroid called dexamethasone. Results released Tuesday, June 16 show it reduced deaths by up to one third in severely ill hospitalized patients. (AP Photo/Hani Mohammed, File)

Researchers in England say they have the first evidence that a drug can improve COVID-19 survival: A cheap, widely available steroid called dexamethasone reduced deaths by up to one third in severely ill hospitalized patients.

Results were announced Tuesday and researchers said they would publish them soon. The study is a large, strict test that randomly assigned 2,104 patients to get the drug and compared them with 4,321 patients getting only usual care.

The drug was given either orally or through an IV. After 28 days, it had reduced deaths by 35% in patients who needed treatment with breathing machines and by 20% in those only needing supplemental oxygen. It did not appear to help less ill patients.

“This is an extremely welcome result,” one study leader, Peter Horby of the University of Oxford, said in a statement. "The survival benefit is clear and large in those patients who are sick enough to require oxygen treatment, so dexamethasone should now become standard of care in these patients. Dexamethasone is inexpensive, on the shelf, and can be used immediately to save lives worldwide.”

Even though the drug only helps in severe cases, “countless lives will be saved globally,” said Nick Cammack of Wellcome, a British charity that supports science research.

“Dexamethasone must now be rolled out and accessed by thousands of critically ill patients around the world," said Cammack, who had no role in the study. "It is highly affordable, easy to make, can be scaled up quickly and only needs a small dosage."

Steroid drugs reduce inflammation, which sometimes develops in COVID-19 patients as the immune system overreacts to fight the infection. This overreaction can prove fatal, so doctors have been testing steroids and other anti-inflammatory drugs in such patients. The World Health Organization advises against using steroids earlier in the course of illness because they can slow the time until patients clear the virus.

Researchers estimated that the drug would prevent one death for every eight patients treated while on breathing machines and one for every 25 patients on extra oxygen alone.

This is the same study that earlier this month showed the malaria drug hydroxychloroquine was not working against the coronavirus. The study enrolled more than 11,000 patients in England, Scotland, Wales and Northern Ireland who were given either standard of care or that plus one of several treatments: dexamethasone; the HIV combo drug lopinavir-ritonavir, the antibiotic azithromycin; the anti-inflammatory drug tocilizumab; or plasma from people who have recovered from COVID-19 that contains antibodies to fight the virus.

Research is continuing on the other treatments. The research is funded by government health agencies in the United Kingdom and private donors including theBill and Melinda Gates Foundation.

The Associated Press Health and Science Department receives support from the Howard Hughes Medical Institute’s Department of Science Education. The AP is solely responsible for all content.