Restaurant provides free food for the homeless and those in need

Sulainder Singh, owner of Quesada Burritos and Tacos in Okotoks, said offering free food is something many Sikhs do, and it has become an annual tradition for his family in India and now Okotoks.
Jan 4, 2020 10:15 AM By: Krista Conrad 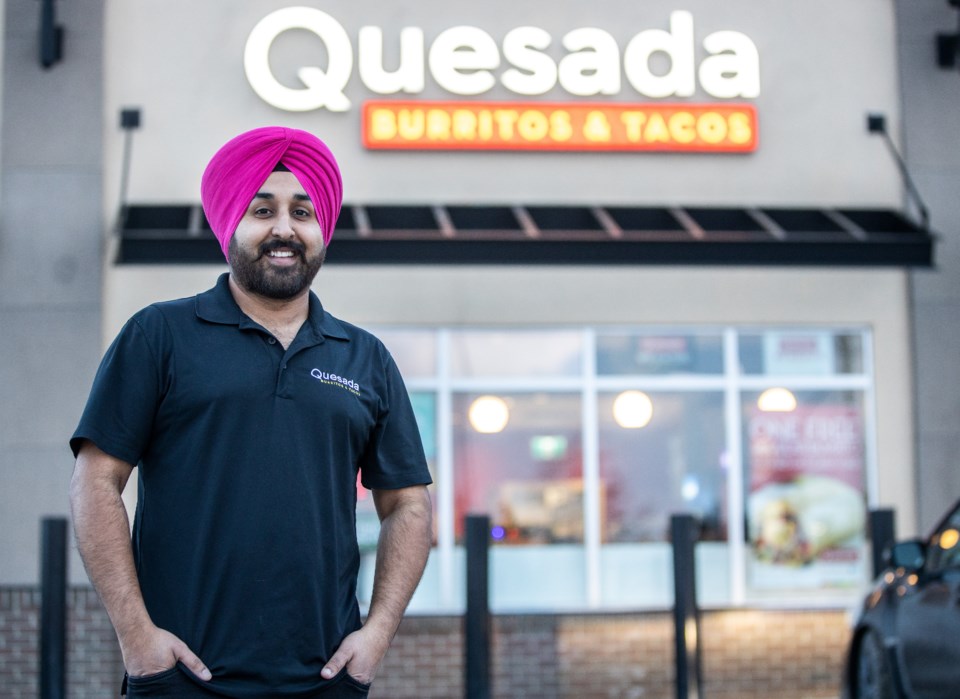 Sulainder Singh, owner of Quesada Burritos and Tacos in Okotoks, poses for a portrait in front of his restaurant on Jan. 3. In keeping with a tradition practiced by his family of farmers in India, Singh and his staff prepared food for those in need during the holidays. (Brent Calver/Western Wheel)

A local restaurant served up its family traditions this Christmas offering free food to those in need.

Sulainder Singh, owner of Quesada Burritos and Tacos in Okotoks, posted a sign on the door of his store in the days leading up to Christmas inviting those who were “homeless, or have no hope from anyone else” to come in for free food on Dec. 25 from 12 p.m. to 8 p.m.

Though nobody showed up for a meal that day, Singh said the food didn’t go to waste.

“We made the food and we just distributed it in downtown Calgary,” he said.

It’s a tradition his family has carried on through generations, beginning with his grandfather.

Each year, the farming family provides meals to the homeless and hopeless free-of-charge in India, he said.

“It’s not on Christmas in India because nobody really celebrates it much,” said Singh. “Usually in February we make the food and give it to people around town.”

There, the good deeds last for three or four days, for about four or five hours per day, he said.

Everyone gets in on the action.

“It’s the whole family,” said Singh. “Our family thinks nobody should sleep hungry. At least we can feed them.

“We’re not doing it to make a profit it’s just to help the community, to feed people in town and give them some food.”

The acts of charity are something the Sikh people are known for, he said.

A Sikh temple will always offer free food for people, usually from dawn to dusk, he said.

“At the Sikh temple in Calgary, there is food there and whenever you go there the food is always free for 24 hours a day,” said Singh. “Anybody can come and eat.”

As for the Quesada campaign in Okotoks, Singh said he’ll see whether they try it for another year. Whether it looks the same or takes a different form, one thing is certain: he’ll be providing for those in need however he can.

Grizzly bear fight caught on camera in Northern B.C. (VIDEO)
Sep 28, 2020 7:30 PM
Comments
We welcome your feedback and encourage you to share your thoughts. We ask that you be respectful of others and their points of view, refrain from personal attacks and stay on topic. To learn about our commenting policies and how we moderate, please read our Community Guidelines.