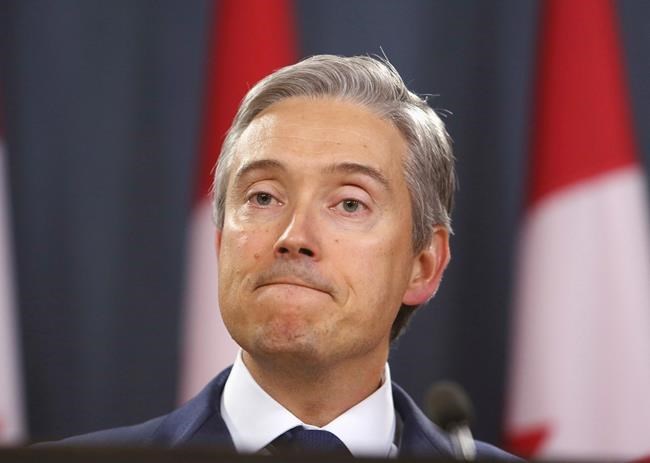 Foreign Affairs Minister Minister Francois-Philippe Champagne holds a new conference to provide an update on the plane crash in Iran, in Ottawa on Friday. CANADIAN PRESS/Photo

OTTAWA — Iran state TV, citing the military, says the country "unintentionally" shot down the Ukrainian jetliner because of human error.

The report out of Tehran contradicts a statement from Iran earlier Friday that strongly denied any responsibility for downing Flight 752, and instead blamed it on a fire in the Boeing 737-800's engine.

The crash Wednesday claimed the lives of 176 people, including 138 who the federal government says were bound for Canada.

Foreign Affairs Minister Francois-Philippe Champagne has said the number of Canadian citizens believed to have been aboard the plane is 57 — not 63 as initially provided by Ukrainian authorities.

On Thursday, Prime Minister Justin Trudeau said multiple intelligence sources had indicated the plane was downed by an Iranian missile, possibly by accident — an assessment that has been echoed by Britain's Prime Minister Boris Johnson and Australia's Scott Morrison.

U.S. Secretary of State Mike Pompeo became the highest-level American official to pin blame on Iran when he made similar comments Friday.

Alberta says universities over-budget; need to freeze travel, hiring, hosting
Jan 16, 2020 12:30 PM
Comments
We welcome your feedback and encourage you to share your thoughts on this story. We ask that you be respectful of others and their points of view, refrain from personal attacks and stay on topic. To learn about our commenting policies and how we moderate, please read our Community Guidelines.