Nadia Lloyd started planning her family's annual Thanksgiving get-together months ago when COVID case numbers were under control across the country.
Oct 1, 2020 3:25 PM By: Canadian Press 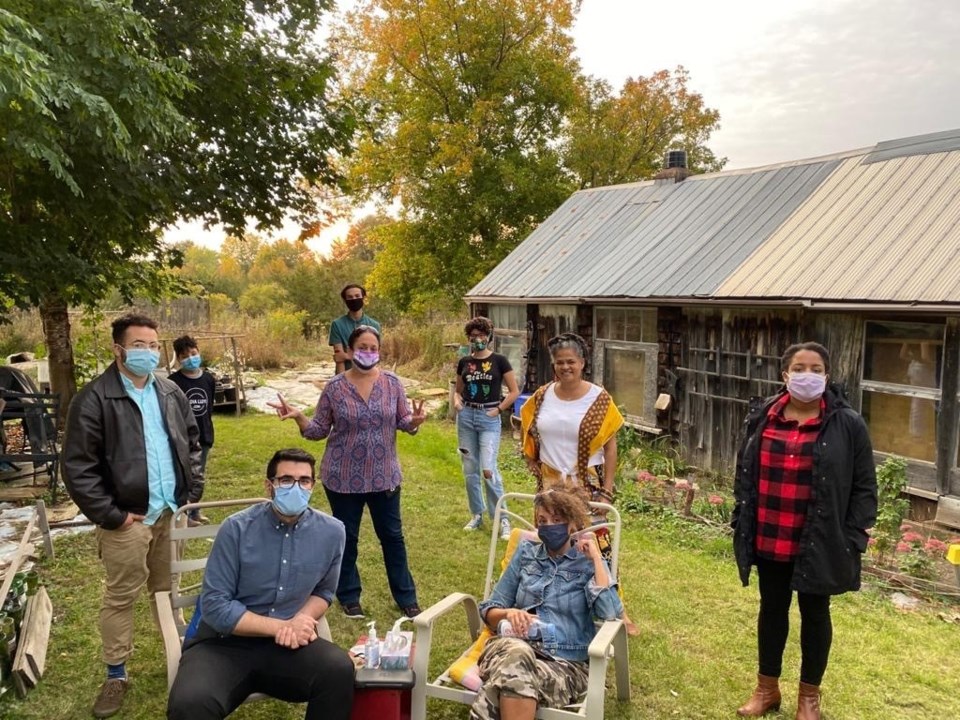 Nadia Lloyd started planning her family's annual Thanksgiving get-together months ago when COVID case numbers were under control across the country.

The gathering was supposed to be a big deal, marking the first time her family — split between Toronto and Montreal — could spend a holiday together in nearly a year after missing Christmas to scheduling conflicts, and Easter to the global pandemic.

Once COVID cases began rising again, Lloyd, a Toronto-based artist and designer, had to shift her plans.

She was still determined to give her family a Thanksgiving celebration, even if it meant holding it three weeks early.

"Typically we do it on the weekend of like everybody else and we have a huge gathering inside, but since we were coming from different cities and my mom is almost 80, we had many reasons to be super cautious," Lloyd said, shortly after hosting the gathering on the last weekend of September.

"It was all about catching that beautiful weather so we could enjoy the garden and enjoy each other, maybe one last time, realistically.

"We're probably not going to see each other (again) until next spring."

Lloyd, a face mask designer whose prints became popular after being worn by Toronto Raptors players and coaches in the NBA bubble, held the party on her 79-year-old mother's spacious property in Belleville, Ont.

Tables were spread out to ensure physical distancing between her 15 relatives, and Lloyd's mother, an avid gardener and cook, made traditional Haitian dishes. Others brought custom Thanksgiving staples like pumpkin pie to supplement the table spread.

"We all had two or three helpings and fell into a food coma," Lloyd said with a laugh.

The outdoor bash was one example of how Canadians are altering Thanksgiving plans with COVID cases and pandemic concerns rising as the crisp, autumn weather sets in.

The Center for Disease Control and Prevention (CDC) says on its website that in-person holiday gatherings can pose increased risk for contracting COVID-19. The level of risk will depend on a number of factors, including where the party is held and the prevalence of the virus in that community, how long the party lasts, and how many people are attending.

Even the social bubbles we formed over the summer are becoming increasingly problematic in parts of the country where cases are rising.

New restrictions on gatherings came into effect Thursday in three regions of Quebec, including Montreal, where having visitors to private homes is prohibited for the next four weeks. Outdoor gatherings are also banned.

Dr. Ilan Schwartz, an infectious disease expert with the University of Alberta, says an online option for your turkey toast — similar to the ones that gained popularity early in the pandemic with Easter and Passover — is the safest way to go.

But those choosing — and still allowed — to celebrate in person can limit risk. Scaling back the guest list to only a few people, making sure the space is large enough for physical distancing while eating, and enforcing mask-wearing before and after the meal can help, he said.

Swapping the turkey tradition for a barbecue picnic can be another option, he added.

"We should really be trying to limit these (in-person) parties as much as possible," Schwartz said. "Canadians will need to be creative in finding safe alternatives to share the holidays with friends and family."

Raywat Deonandan, an epidemiologist with the University of Ottawa, says converting an open garage into a makeshift dining area — "as unappetizing as that sounds" — could be a way to ensure air flow in a space.

He stressed that now is not the time to hold Thanksgiving gatherings, however, and any modifications made to an in-person party will still be "imperfect."

"All of these measures have risk associated with them," Deonandan said. "And the risk might be quite small, but if thousands of people are doing this ... the probability of something going wrong increases."

Whether it's a garage gathering, a virtual visit, or a scaled-back sit-down service, a pandemic-era Thanksgiving will look and feel different for many.

Lloyd says that was noticeable at her own family celebration, when she insisted on wearing two masks and turning her head outward before hugging her elderly mother, or when she reluctantly steered clear of her niece, who's six months pregnant.

"Typically I would have had my hands all over her belly, I would have hugged her, I would have kissed her. I couldn't do any of that," she said. "So I really feel like I lost out on something. That (closeness) is the stuff that really feeds your soul."

Steve Joordens, a psychology professor at the University of Toronto, says feelings of sadness or disappointment are to be expected at Thanksgiving this year.

Some may even find getting into the holiday mindset a lot more difficult.

"It's awfully hard when you're not having a great year and when you're not really thankful for the events of the last six months," Joordens said. "I wish it was called 'silver linings day' or something this year, so we could all admit that yes, there's this huge, big grey cloud over all of our lives, but maybe there are some good things going on too.

"Maybe we can be thankful for the silver linings rather than thankful in a bigger sense."

This report by The Canadian Press was first published Oct. 1, 2020.

Here’s where to find every wind turbine in Canada
Oct 29, 2020 10:45 AM
Comments
We welcome your feedback and encourage you to share your thoughts. We ask that you be respectful of others and their points of view, refrain from personal attacks and stay on topic. To learn about our commenting policies and how we moderate, please read our Community Guidelines.