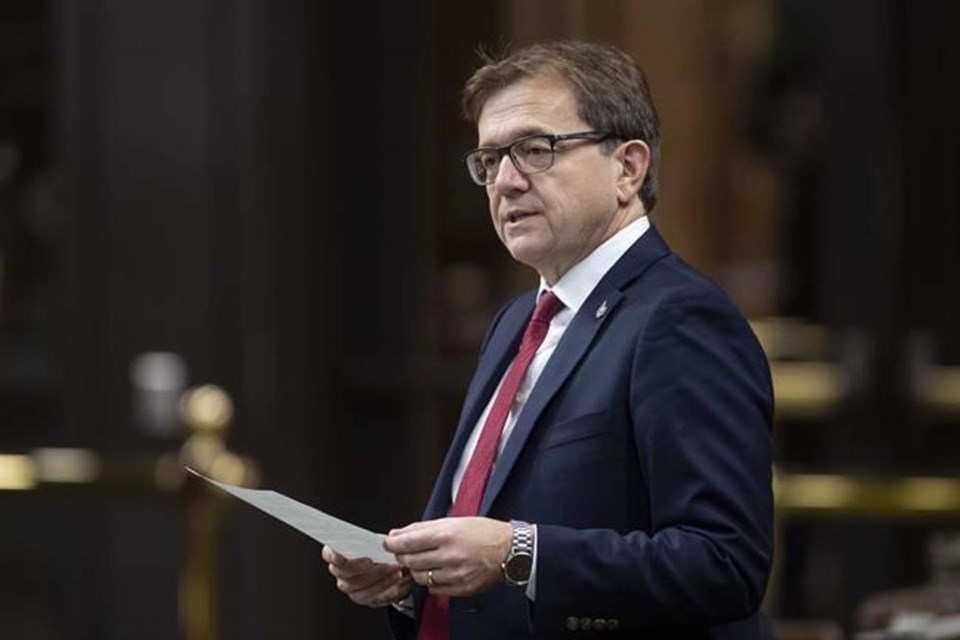 Environment Minister Jonathan Wilkinson responds during question period in the House of Commons on Thursday, Nov. 19, 2020 in Ottawa. A third request has been made to the federal government to get involved in the review of a coal mine proposed for Alberta's Rocky Mountains. THE CANADIAN PRESS/Adrian Wyld

A fourth request has been made to the federal government to get involved in the environmental review of a coal mine proposed for Alberta's Rocky Mountains.

"It's important for the minister to understand that the concern is quite widespread," said Bobbi Lambright of the Livingstone Landowners Group, one of the signatories to the letter.

The others are the environmental law firm Ecojustice, the Canadian Parks and Wilderness Society and Niitsitapi Water Protectors. Their request for federal participation joins others from the Siksika and Blood First Nations, rancher Macleay Blades and an 18,000-name petition presented by Edmonton NDP MP Heather McPherson.

The petition goes further in requesting a general review of all potential coal projects in the area.

Ecojustice lawyer David Khan said one reason the mine needs federal review is that it would span the Alberta-British Columbia boundary.

"Some of the leases themselves are in B.C.," he said.

The letter spells out a long list of other reasons why the signatories believe Ottawa should be involved.

It says the mine would be in an environmentally sensitive region, would affect areas of federal authority such as fisheries and species at risk, and could pollute water flowing into the United States.

The letter adds the mine could make Canada's greenhouse gas targets harder to reach and would be one of similar developments that would have significant cumulative impacts.

It would also affect Indigenous rights, something Alberta's regulatory agency is forbidden by law from considering.

Khan noted that Montem's coal output, at least at first, would be just shy of a threshold triggering an automatic federal review.

"We certainly are concerned whether they've been manipulating volumes to get out of a federal assessment," he said.

Company materials say Canada's Impact Assessment Agency has already told Montem it won't get involved in a review. Communication to that effect does not appear on the agency's public registry.

"One of the concerns with the Alberta Energy Regulator process is that it's not transparent. It's very difficult to find out what's going on and there's very limited opportunity for meaningful public input."

She said the joint federal-provincial review of the proposed Grassy Mountain mine offered much better access to information and opportunity for discussion.

The requests for federal involvement now go to the Impact Assessment Agency. The minister has 90 days to respond and can overrule the agency's initial decision. The first request was made on March 2.

A spokeswoman for Wilkinson said he couldn't comment until after the requests are processed.

"Lots of times these decisions end up in court or are judicially reviewed," said Moira Kelly.

Alberta's coal controversy began last May when the United Conservative government quietly revoked a policy that had protected the summits and eastern slopes of the Rockies from open-pit coal mines since 1976.

Concerns grew, both over the threat to a beloved landscape and the potential for water contamination from selenium, common in coal mining.

Facing a huge public backlash, the government restored the policy and its protections in February. However, it failed to cancel exploration leases sold in the interim and several companies have been drilling and road-building in an area where much of Alberta's drinking water originates.

This report by The Canadian Press was first published April 6, 2021.