The view from the front seat

Barrhead native Melissa Lotholz continues her quest to earn a spot on the Olympic bobsleigh team as a driver
Mar 20, 2021 1:45 PM By: Barry Kerton 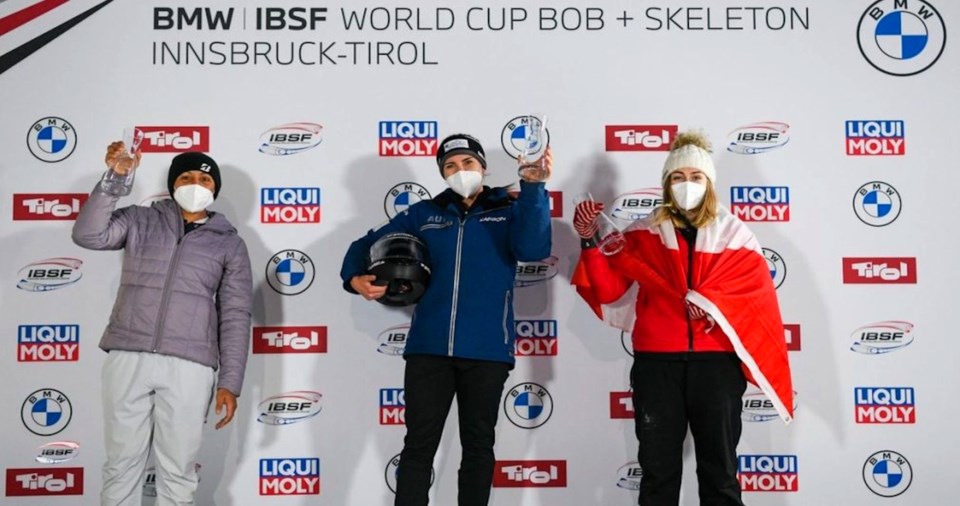 Melissa Lotholz at the podium ceremony after taking her first World Cup medal (a bronze in the monobob) as a driver, in a World Cup event in Igls, Austria.

BARRHEAD-On any given day, a Canadian women's bobsleigh or monobob can find themselves on the podium.

That is how strong the women's program is. The question is when Canada takes the hill for the 2022 Bejing Winter Olympics, who will be the pilots of the sleighs attempting to slide their way to an Olympic medal.

Barrhead native Melissa Lotholz believes there is a good chance one of those pilots will be her.

That is what Lotholz said in between training runs at the Whistler Sliding Centre (WSC). She has been at the centre since Feb. 16, after returning to Canada from a whirlwind tour of Europe where she competed for a month in the two-person and monobob events, as part of a COVID-19 condensed race season.

"The Canadian women's bobsleigh team might be at the strongest point it has ever been, especially on the driving side," she said. "There is a lot of depth. At any given event, we can send multiple sleds out and have an opportunity to medal."

The problem is Canada has more talented drivers than sleds, and there is a chance that someone capable of winning an Olympic medal could be watching from the sidelines.

Lotholz is a veteran of the Canadian Bobsleigh team, having joined in the fall of 2014. For the first four years, she would compete as a breakman, mostly for Canadian pilot Kaillie Humphries, accumulating 17 World Cup medals, including two World Championship silver medals in the process. Lotholz also competed at the 2018 PyeongChang Olympics, teaming up with fellow Albertan, Christine De Bruin, and placing seventh.

After the Olympics, Lotholz decided to turn her energy to competing from the front seat and learned to become a pilot. The 2020-2021 season was her second year as part of the process.

Going into the season, Lotholz did not think she would get a chance to compete overseas and would spend her time on the development circuit in North America.

However, shortly before Christmas, the coaching staff approached Lotholz and some of the others on the development team and asked them if they wanted and were willing to take part in both the development and world cup circuits in Europe.

"It is really important that we get experience with next year being an Olympic year. Especially on some of the new tracks that I haven't been to before, at least as a driver," she said.

Before Lotholz and her teammates could join the rest of the Canadian team in Altenburg, Germany, they had to quarantine in Ottawa for five days.

"That is where I spent Christmas, alone in a hotel room," she said, adding she was fortunate to have been able to have an early Christmas in Barrhead, before going into quarantine.

Before jetting off to Europe, Lotholz would receive the first of many quick COVID-19 tests.

Lotholz noted on average, Canadian athletes were tested for COVID-19 twice a week as well as before leaving for the next country. The first test was before training began, the second right before a competition.

"At the track, we were always wearing masks, but the type changed from venue to venue," she said, noting at some locations they were able to use the more common cloth or three-ply disposable masks versus the more elaborate N95 and KN95 respirator masks. "They sometimes eased it up when we were outside warming up. It is possible to train with a mask, but you do get tired quicker."

Overall she was pleased with their performance.

"Altenburg is one of the more technical tracks. If you make a mistake on any track you are going to lose time, but if you make one in Altenburg you could find yourself on your head," Lotholz said.

A week later, Lotholz competed in a pair of events, the two-women bobsleigh as part of the Eurocup and monobob in Innsbruck, Austria. In the two-women event, Lotholz and brakeman Catherine Mederios were the top Canadian finishers, placing fourth.

In the monobob, Lotholz bested teammate Cynthia Appiah to take the gold medal.

"It was such an exciting week, to be able to compete the first time overseas in my first monobob event and using for the first time,our new Canadian monobob sleds," she said

Lotholz did not have much time to celebrate as the tour moved to Königssee, Germany, where she competed in both the two-person and monobob.

"Königssee is part of the World Cup and most of the top drivers are there competing in both events and it was exciting to see where I stacked up," she said.

The answer was, pretty well. Lotholz finished fifth in a tight monobob competition.

"To finish Top Five with that level of competition, in my World Cup debut as a driver. I was over the moon," she said.

Although she did not want to make excuses, going into the event they knew they would be using a six-year-old sled, and it would be tough to overcome that disadvantage.

"We had great execution and it is a great learning sled, but it isn't competitive," Lotholz said.

Because of the team's success, for the next event — a World Cup stop in Ings, Austria, — the coaching staff did their utmost to maximize their chances of landing on the podium. For the two-person race, Lotholz was paired with brakeman Sara Villani, sharing a sled with Christopher Spring (one of Canada’s top male drivers).

The pair finished fifth, with only a few hundredths of a second separating the top sleds, including another Canadian sled piloted by Cynthia Appiah who finished fourth.

"We haven't done a lot of World Cup races and to be able to have two sleds in the Top 5 ... we made a statement," Lotholz said.

She also made a statement in the monobob, earning her first medal at a World Cup event, a bronze.

The final event of the season was the World Championships in Altenburg.

Lotholz competed in the monobob, finishing seventh under challenging conditions.

"It had been cold all week and the ice was really hard," she said. "The whole field struggled to find a way to control the sled. People were breaking into skids all over the place and there were quite a few crashes, even on race day."

Lotholz will be in Whistler for another week before returning to Barrhead.

After taking a short break, she plans to return to her Rocky IV type training using items she has adapted on the farm, as well as keeping her fans and wellwishers up to date through a new webpage: www.mellotholz.com