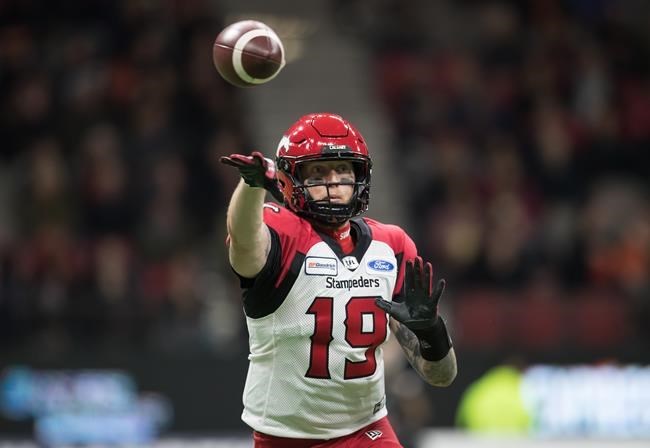 TORONTO — The COVID-19 pandemic has done something few CFL defences have since 2014 -- ground Bo Levi Mitchell.

The Calgary Stampeders star was named the quarterback of the CFL's all-decade team (2010-19) on Thursday. It wasn't surprising given the 30-year-old Katy, Texas, native has amassed a stellar 77-18 record (.804 win percentage) and led his club to four Grey Cup appearances, winning two and being named the game MVP both times.

Ricky Ray -- who holds the league record for most Grey Cup wins by a starter (four) and was named to the all-decade second team -- and former CFL head coach Wally Buono both endorsed Mitchell after the finalists were named.

"My biggest thing was getting the nod from Ricky Ray and Wally, that's huge and a big honour in itself," Mitchell said. "To me, as a quarterback you're that point guard and it kind of points to all of those guys around me the last eight years, how good our teams have been and how blessed I've been to be in Calgary over this first part of my career.

Banks, the CFL's top player in 2019, made the second team as a receiver.

Of his impressive list of career highlights, Mitchell said his first season as Calgary's starter was his most memorable. Mitchell led the Stampeders to a CFL-best 13-5 record in 2014 and capped the year as the Grey Cup MVP of the Stampeders' 20-16 win over Hamilton after Banks' 90-yard punt-return TD with under a minute remaining as nullified by penalty.

"That was a special year, kind of a take-off moment," Mitchell said. "Getting to play Zach (then Ticats starter Zach Collaros), another young guy in the Grey Cup and us having both great years and great games . . . it kind of resides with me as that first one."

In August, the CFL cancelled plans for an abbreviated '20 season due to the COVID-19 pandemic. While disappointed about not being able to play, Mitchell has had more time to recover from off-season shoulder surgery.

And given more pro quarterbacks are playing into their 40s, Mitchell said securing a spot on the CFLs next all-decade team could be a realistic goal.

"That's probably the easiest goal to write down," Mitchell said. "But honestly, I'm only going to play as long as I'm efficient and getting the job done and still competing for championships."

Mitchell praised the selection of Elimimian and said it was especially tough to face B.C. when he and Bighill played together.

"It was tough to play against those guys because you couldn't attack one linebacker and that's something we like to do," Mitchell said. "The biggest compliment I can give (Elimimian) is the No. 1 way we attack him was on a five-yard out . . . that's the most we could get off the guy.

"At some point it's not how we attack the guy but kind of how we slow the guy down and not let him run the game."

Elimimian, 34, is a decorated CFL player, having also been named its top rookie in 2010 and a four- time league all-star. A 2011 Grey Cup champion with B.C., the six-foot, 225-pound linebacker said he didn't register those achievements alone.

"It's a tremendous honour and I'm very fortunate but I think it really symbolizes not only my journey but the tremendous people I've had around me," he said. "People like Wally Buono, Mike Benevides, Mark Washington (all former B,C, Lions coaches) and even last year with Jason Shivers and Craig Dickenson (Saskatchewan's defensive co-ordinator and head coach, respectively) in addition to all the tremendous teammates I've had and obviously my family and friends. That's what it signifies to me."

But the honour is also a testament to consistency and for Elimimian, continually overcoming adversity.

"I've had disappointments in my career, which is crazy to say," Elimimian said. "When I first came to Canada I don't think many players had to work out twice to receive a contract.

"I think about 2014 in the off-season I was on the trade block . . . thank God coach Benevides believed in me and Wally moved forward with me. I tore my Achilles in 2015 after winning MOP and managed to overcome that. I was released in 2019 and able to come back from that. The awards are great but it's about overcoming, about not being dealt the best cards but still playing the ones you're dealt and being able to overcome."

Bowman played 11 seasons with Saskatchewan Winnipeg, Edmonton and Montreal (2008-18). His best years were with the Eskimos (2011-17), with whom he registered his four career 1,000-yard seasons and won a Grey Cup with in 2015. The married father of two young daughters calls Edmonton home.

"I used to always hear great things about Edmonton," Bowman said. " Once I got there, I understood a lot more what they meant and it wasn't so much the playing part but the community and culture I ended up becoming a part of.

"For a guy like me, the better environment I'm in the better I can produce and that's why going to Edmonton really excelled my career and why I'm on this team. I'm looking outside now, there's snow, it's -9 C and I have my daughter with me. It's truly home."

Bowman couldn't be happier that long-time rival Smith made the grade. Bowman has often called Smith the toughest defensive player he faced in Canada.

"We joke all the time that if I was a superhero he'd be my Kryptonite," Bowman said. "I'll tell you, he was amazing."

This report by The Canadian Press was first published Nov. 19, 2020

Calgary Stampeders reduce coaching staff amid pandemic economic pain
Nov 18, 2020 12:30 PM
Comments
We welcome your feedback and encourage you to share your thoughts. We ask that you be respectful of others and their points of view, refrain from personal attacks and stay on topic. To learn about our commenting policies and how we moderate, please read our Community Guidelines.