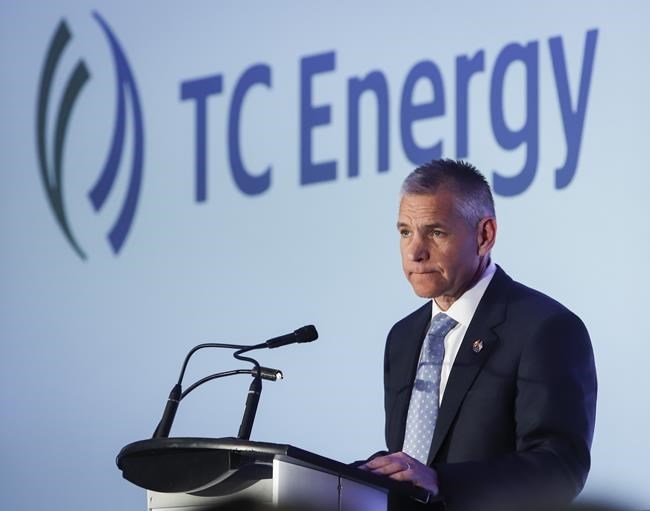 CALGARY — The CEO of pipeline and power company TC Energy Corp. says he's "extremely disappointed" that police have had to be called in to allow the company to go ahead with construction of its Coastal GasLink pipeline.

The Calgary-based company is still trying to reach agreement with the hereditary Wet'suwet'en chiefs who oppose the $6.2-billion pipeline, said Russ Girling on a conference call Thursday to discuss fourth-quarter results.

Anti-pipeline protesters who say they are acting in solidarity with the chiefs are continuing to blockade rail lines, government offices and road intersections across Canada.

"Today we are proceeding with work at over 30 sites along the 670-kilometre route with over 1,000 men and women currently employed," said Girling, noting that the RCMP began enforcing a court injunction against blockades on Feb. 6.

"We're extremely disappointed enforcement was required to reopen the Morice River forest service road but we will continue our efforts to attempt to engage with the hereditary chiefs of the Wet’suwet’en and Unist’ot’en in search of a peaceful long-term resolution that benefits all of the people in that community."

The company made a deal in December that's expected to close in the first half of 2020 to sell a 65 per cent equity interest in the project to American investor KKR and Alberta Investment Management Corp.

The pipeline is designed to take natural gas from northeastern B.C. to the $40-billion LNG Canada liquefied natural gas export terminal under construction at Kitimat on the West Coast.

TC Energy's Keystone XL pipeline project, meanwhile, has recently received several key regulatory approvals in the United States and its capacity is fully subscribed by customers, but the company is not yet ready for a final investment decision, said Girling.

"We have now acquired 100 per cent of the right-of-way for the pipeline through all states, Montana, South Dakota and Nebraska," he reported.

"Moving forward, we will continue to carefully and methodically manage various regulatory and legal matters before we consider advancing this commercially secured project into construction."

The pipeline still needs approval from the U.S. Army Corps of Engineers for access to waters in the U.S. and faces litigation in Montana contesting a presidential permit granted by Donald Trump, said Paul Miller, president of liquids pipelines.

TC Energy, formerly known as TransCanada Corp., reported net income of $1.1 billion in the three months ended Dec. 31, matching its performance in the same period of 2018, despite a 16 per cent fall in revenue to $3.26 billion.

Reported earnings per share were $1.18, down a penny from the year-earlier period but ahead of analyst expectations of $1.03, according to financial markets data firm Refinitiv.

Comparable earnings before interest, taxes, depreciation and amortization decreased by $138 million to $2.3 billion.

Keystone volumes were hit by a leak in North Dakota in October that temporarily shut down the pipeline that runs from Alberta to Nebraska.

TC Energy announced it has approved a $900-million expansion to its NGTL natural gas pipeline system in Western Canada, as well as a US$300-million expansion of its ANR Pipeline in the United States designed to help transport Canadian gas to the U.S. Gulf Coast and other markets.

This report by The Canadian Press was first published Feb. 13, 2020.

Companies in this story: (TSX:TRP)

Greta sticker that drew outrage in Alberta not child pornography: RCMP
Feb 28, 2020 3:38 PM
Comments
We welcome your feedback and encourage you to share your thoughts on this story. We ask that you be respectful of others and their points of view, refrain from personal attacks and stay on topic. To learn about our commenting policies and how we moderate, please read our Community Guidelines.