'So unfair': Métis take Alberta to court over refusal to discuss consultation policy 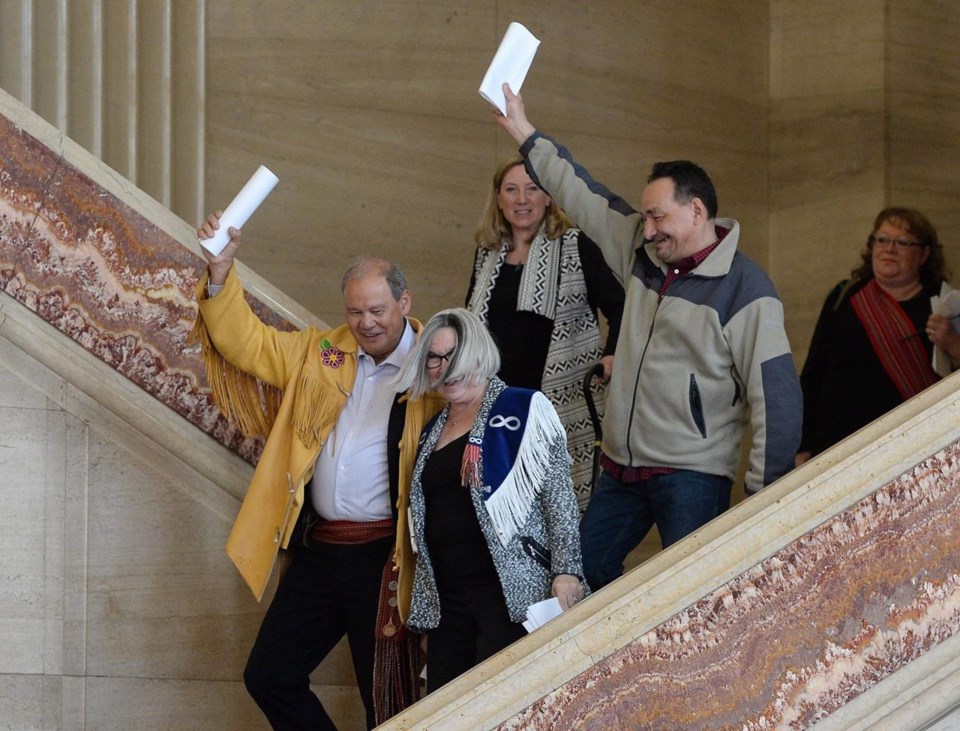 EDMONTON — The Métis Nation of Alberta is taking the provincial government to court over what it says is negotiating in bad faith on a consultation agreement.

"We feel we have no option," said Audrey Poitras of the Métis Nation of Alberta, which filed a request Monday for a judicial review.

"The government of Alberta does not recognize we have rights in this country."

The Métis are seeking an overall agreement on how they should be consulted over resource development or government plans that could affect their traditional land and practices. Poitras said the Métis Nation nearly had one after five years of talks with the province under two different governments.

But that all came to an end shortly after the election of the United Conservative Party. On Sept. 5, 2019, Poitras received a letter from provincial Indigenous Relations Minister Rick Wilson stating "Alberta will not be moving forward with the draft consultation policy."

Court documents say the Métis were never provided with the rationale for that decision.

Government briefing notes referred to in the Métis application suggest bureaucrats, saying it would be expensive and time-consuming, decided an overall consultation policy wasn't needed. The court documents quote a handwritten note to a senior official saying, "Adding more (Indigenous) communities to consult with is burdening industry."

The notes suggest continuing the current policy, which forces Métis people seeking to have a voice in development to go through an onerous "credible assertion" process. That's proven so difficult that the Métis Nation still hasn't been able to complete it, Poitras said.

Alberta does have agreements with Métis settlements, but fewer than about five per cent of the province's 114,000 Métis live in them. The Métis Nation has about 47,000 registered members, Poitras said.

"It is so unfair that the majority of Métis don't live on those (settlements) and yet we're not even talking anymore."

Poitras points out her group has a consultation agreement with the federal government. The provinces of Saskatchewan, Manitoba and Ontario all have such agreements with Métis living there.

Alberta has one with First Nations, so why not Métis? asked Poitras.

"It's totally wrong for the government to just decide to stop talking to us," she said. "This is systemic racism in action."

Poitras said the government has ignored the group's repeated calls to resume talks.

Adrienne South, spokeswoman for Wilson, said the department couldn't comment on a matter before the courts.

“Alberta’s government values its relationship with the Metis as shown by our support of affordable housing projects, cultural outreach for Metis Crossing, ongoing supports during the pandemic and continuous engagement with Alberta’s Metis peoples," she said.

The Métis Nation's court filing says the Supreme Court has repeatedly affirmed that Métis have Indigenous rights under the Constitution. The court has also said Canada has both a duty to consult and a duty to negotiate.

NDP Opposition Leader Rachel Notley, who appeared with Poitras at a news conference, said walking away from the nearly complete consultation agreement as the government did in 2019 creates more uncertainty, risk and red tape for everyone, including industry.

"A formal policy would help us to enshrine a process for new projects. It would allow the government to bring willing partners to the table and it would provide industry with transparency and predictability," Notley said.