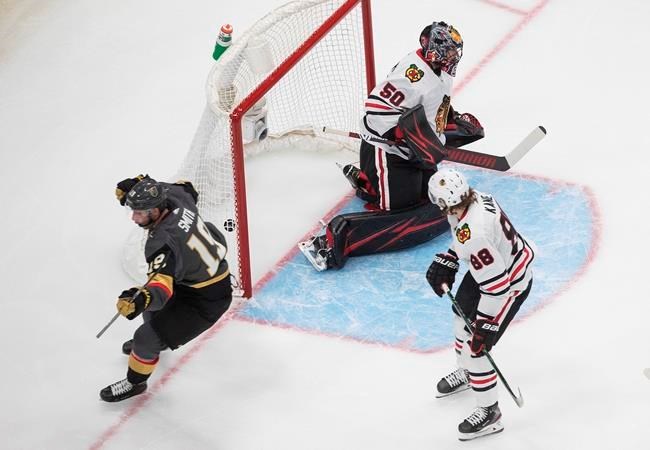 EDMONTON — Robin Lehner had more trouble with one of his skates than he did with his former team.

Theodore and William Carrier scored 2:17 apart midway through the second period, Lehner made 19 saves against his former team, and the Golden Knights beat the Chicago Blackhawks 4-1 in Game 1 of their Stanley Cup playoffs first-round matchup.

Smith scored twice in the third period as the top-seed in the Western Conference kept their scoring outburst from the round-robin seeding games going in the playoff opener. The Golden Knights scored 15 goals in the three seeding games and didn’t slow down against the Blackhawks.

Lehner, who was traded from Chicago to Vegas in February, was the backbone of a Golden Knights that shut down the Blackhawks. Lehner’s biggest problem was a faulty skate blade that led to delays in the second period.

“What’s so good on our team is everyone works back, everyone’s blocking shots,” Lehner said. “The () was really good today about cleaning up the rebounds. They're a dangerous team so we just got to tighten up a little bit. I think we can be even better.”

Lehner said he learned Monday morning he would start Game 1 rather than Marc Andre-Fleury. Lehner played two of the three games during the round-robin.

“There’s no better duo in the NHL for goalies,” Vegas Jonathan Marchessault said. “(Fluery) is an amazing team player as well. He was the first to cheer the boys on in the locker room, and he’s such a leader on and off the ice. I think whoever’s in that, we we feel 100% confident as a group.”

David Kampf scored short-handed for the Blackhawks in the second period thanks largely to the work of Brandon Saad forcing a turnover, but that was the extent of Chicago’s scoring.

“I think we’ll definitely have adjustments, but for the most part I think we did a pretty good job,” Saad said. “We've got to know that’s how the series is going to be. We can’t just when things aren’t going our way get frustrated or if they score a goal, kind of get let down.”

Theodore scored his third goal of the , flicking a wrist shot past Chicago goaltender Corey Crawford from the right circle. Minutes later, Carrier jabbed home a loose puck in front of Crawford’s net after Ryan Reeves had thrown the puck on net to give the Golden Knights a 2-0 lead.

Smith assisted on Theodore’s opener before finding the net himself twice in the final 20 minutes. Both goals were assisted by Marchessault, the second allowing Smith to skate in free and lift a backhanded shot over Crawford’s glove.

Vegas earned the top-seed in the Western Conference after winning the Pacific Division and going 3-0 in the round-robin qualifying round to determine playoff seeding.

But Chicago was an unexpected first-round opponent for the Golden Knights. The Blackhawks, as the No. 12 seed, were impressive in dispatching Edmonton in four games in the qualifying round.

NOTES: Vegas F Max Pacioretty made his debut after being slowed by a minor injury. Pacioretty led Vegas with 32 goals and 66 points this season. ... The game was stopped for several minutes early in the second period after Lehner lost the blade on his left skate after banging it into the goal post. Lehner needed additional work on the skate later in the period during a timeout and had the blade come off the skate again late in the period during a Chicago power play. “I was pretty frustrated. That's the first time that has happened to me,” Lehner said.

Calgary hospital restricts visitors, postpones surgeries as COVID-19 infections grow
Sep 28, 2020 4:32 PM
Calgary man pleads guilty in crash that killed woman out on a work break
Sep 28, 2020 4:09 PM
Comments
We welcome your feedback and encourage you to share your thoughts. We ask that you be respectful of others and their points of view, refrain from personal attacks and stay on topic. To learn about our commenting policies and how we moderate, please read our Community Guidelines.