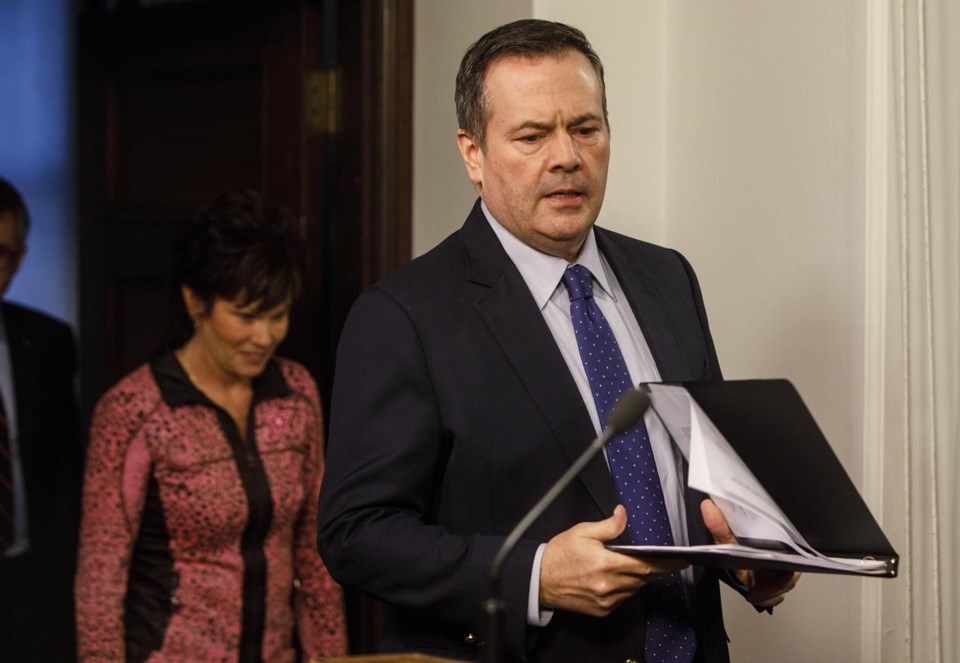 EDMONTON — Alberta will release its COVID-19 projections early next week, Premier Jason Kenney said Friday as he announced five more deaths and a ban on visitors to hospitals.

There were an additional 107 confirmed cases in the province, bringing the total number to 1,075.

The five deaths include a woman in her 20s with no immediately apparent underlying health conditions. A total of 18 people have now died of the disease in Alberta.

"The total number of infections and deaths will, undoubtedly, continue to rise in the days and the weeks to come, but so will the number of recovered cases," Kenney said.

Deena Hinshaw, chief medical health officer, said visitors will be banned from Alberta hospitals in an effort to slow the spread of the virus. She said some exemptions will be made on a case-by-case basis for child patients and women who are giving birth.

"Please plan to support loved ones in hospital with virtual visits instead," Hinshaw said.

There were about 4,000 completed COVID-19 tests in Alberta over the last 24 hours, bringing the total number of tests done in the province to more than 60,000.

Kenney said the total rate of deaths in Alberta is almost half of the hardest-hit areas of the world, such as Spain, Italy and the United States.

"I caution that this is just a snapshot in time, but it does reflect where Alberta is today and has consistently been for the past three weeks," Kenney said.

There is now enough data to release modelling about potential paths of the pandemic in Alberta, he said.

"I can assure Albertans today, however, that the modelling indicates that we have the health-care equipment, personnel and supplies needed to cope with anticipated hospitalizations, including in intensive-care units and including the usage of ventilators."

Ontario released its projections Friday, with its death toll expected to reach as high as 15,000.

Kenney also called on businesses and non-profits to donate services and supplies to help control the spread of COVID-19, noting that more 1,000 have already reached out to Alberta's Emergency Management Agency.

He said hotels have offered about 3,000 rooms for health-care workers, first responders and for those needing emergency isolation.

"Show us the kind of Alberta spirit in innovation, in production that we can generate to help fight the pandemic."

This report by The Canadian Press was first published April 3, 2020

Alberta introduces bill to create own parole board like Quebec, Ontario
Jun 1, 2020 3:36 PM

Mother of toddler found dead outside Edmonton church says she can't forgive
Jun 1, 2020 1:51 PM
Comments
We welcome your feedback and encourage you to share your thoughts. We ask that you be respectful of others and their points of view, refrain from personal attacks and stay on topic. To learn about our commenting policies and how we moderate, please read our Community Guidelines.